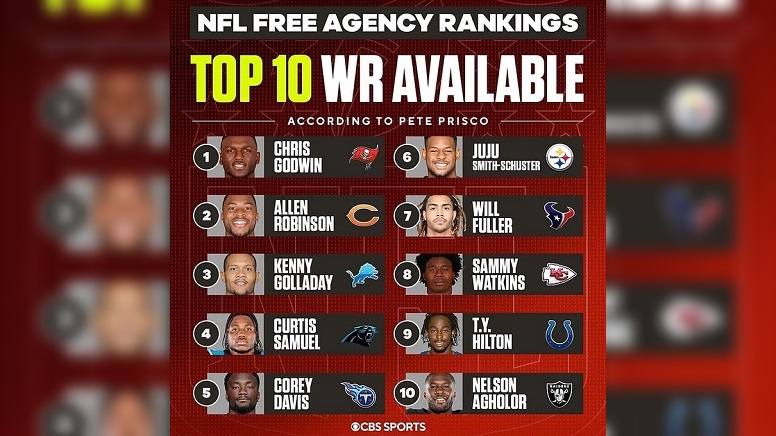 Assuming he makes it to unrestricted free agency in the next 11 days, will Pittsburgh Steelers wide receiver JuJu Smith-Schuster be the most sought-after prize at his position on March 17? There seems to be a lot of analysts who don’t believe that will be the case and Pete Prisco of CBS Sports apparently falls into that category.

Prisco recently released his top free agents of 2021 list and when you look at how the wide receivers are ranked, Smith-Schuster is sixth overall and behind Chris Godwin, Allen Robinson, Kenny Golladay, Curtis Samuel, and Corey Davis. Is that a fair set of rankings?

While raw stats certainly aren’t everything, Smith-Schuster certainly buries the nine other wide receivers on Prisco’s top 10 list when it comes to receptions, receiving yards, touchdowns and catch percentage over the course of the last four seasons. I would dare say that Smith-Schuster is one of the top three blockers on the ten players listed by Prisco as well.

Last season, Smith-Schuster wasn’t used down the field as much on offense and that certainly impacted his yards per catch number. He was, however, still able to have quite the success last season when it came to getting tough yards after the catch.

Smith-Schuster has thrived as a slot wide receiver since entering the NFL in 2017 as a second-round draft pick out of USC and he also can play on the outside when needed as well. That position flexibility should help his marketability should he ultimately become an unrestricted free agent 11 days from now.

Personally, I feel Prisco slighted Smith-Schuster quite a bit and undersold him overall. I might rank Chris Godwin and T.Y. Hilton ahead of Smith-Schuster if push came to shove, but that’s probably it. Smith-Schuster should get a nice payday in the next two weeks all rankings aside and now we’ll wait and see which team ultimately winds up paying him.