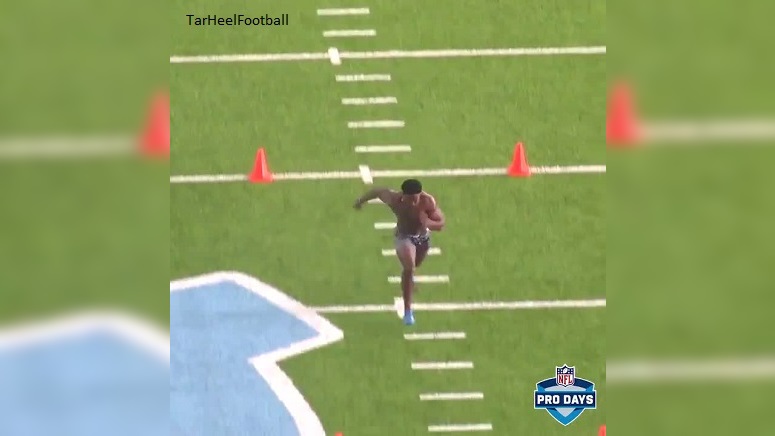 What’s going on with Pittsburgh Steelers general manager Kevin Colbert and head coach Mike Tomlin on this fine Monday, the last one of March? It’s hard to say for sure at the time of this post but it certainly doesn’t seem like either were in attendance for the North Carolina pro day on Monday, according to Jonathan Jones of CBS Sports.

Jones told me on Monday that he did not see neither Colbert nor Tomlin listed on the North Carolina pro day RSVP list. He did note, however, that the Steelers running backs coach was listed so we assume that is Eddie Faulkner that he is talking about. That wouldn’t be surprising with North Carolina running backs Javonte Williams and Michael Carter being on display on Monday.

So, assuming Colbert and Tomlin both failed to attend the North Carolina pro day on Monday is that big news? It is if you think Williams might ultimately be the Steelers first-round selection in 2021. The Steelers have a long history of attending the pro days of the players they select in the first round of drafts so Colbert and Tomlin not being present to see Williams go through the paces on Monday is big news, at least on the surface.

William, by the way, measured in on Monday at 5095, 212-pounds. He reportedly ran his 40-yard dash in 4.55-seconds as well. Williams’ pro day comes on the heels of NFL Network draft analyst Daniel Jeremiah having the North Carolina running back now ranked as his 26th overall prospect, which is up six spots from before on his rankings. Williams, however, is still the third overall running back on his list behind Clemson’s Travis Etienne (20th) and Alabama’s Najee Harris (21st).

Below is what Jeremiah penned about Williams on Monday.

“Williams is a thick, compact running back with outstanding vision, power and quickness. He is quick to find/attack the hole with a bounce in his step on inside runs. He has tremendous lateral quickness to make defenders miss in tight quarters. He runs with a low pad level and accelerates through contact. Williams has the burst to get the edge on outside runs and he’s elusive once he gets into the open field. He is effective as a checkdown option in the passing game and flashes some route polish on angle routes in the middle of the field. He has reliable hands, although you will see some double catches. He is aware in pass protection and can squat and absorb blitzers. Overall, Williams is a complete player and could emerge as the best running back in the 2021 class.”

We will keep checking the Monday reports and the picture and video from the North Carolina pro day to see if we can find any evidence of Colbert and Tomlin being there. For now, however, it sure looks like they chose not to attend the event.