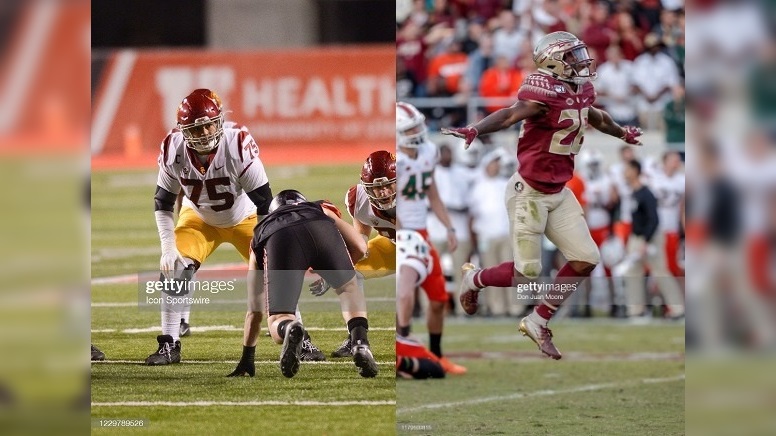 The 2021 pro days are now underway, and the 2021 NFL Draft is less than 60 days away as well. This obviously means the 2021 mock draft season is in full swing and Chad Reuter of NFL.com is the latest to release one on the major media level and it is four-round offering at that.

In the first round of his four-rounder, Reuter has the Pittsburgh Steelers selecting USC offensive lineman Alijah Vera-Tucker at 24 overall. Below is what he wrote about the underclassman and his reason for mocking him to the Steelers.

Left tackle Alejandro Villanueva will be a free agent, and Vera-Tucker played well enough at left tackle for the Trojans to project there in the NFL.

We have yet to profile Vera-Tucker on the site but should have a report done on him soon. Vera-Tucker, listed at 6’4, 315, has extensive starting experience at left guard and left tackle. He played left tackle for the Trojans in 2020. He won the Morris Trophy in 2020, awarded annually to the best offensive and defensive linemen in the conference, as selected by opposing players. He was also named first-team All-PAC 12 in 2020 and was selected as second-team All-PAC 12 in 2019.

In the second round of his latest mock, Reuter has the Steelers selecting Florida State cornerback Asante Samuel Jr. at 55 overall.

Another player that declared this year as an underclassman, Samuel registered 30 tackles, three interceptions, and six passes defended in eight games this past season for Florida State. He had 97 career tackles, four interceptions, and 29 passes defended throughout his three seasons with the Seminoles. He is also the son of former NFL cornerback Asante Samuel.
We have a profile already done on Samuel and you can read it below.

In the third round of his latest mock, Reuter has the Steelers selecting Stanford center Drew Dalman at 87th overall.

At Stanford, Dalman earned a grade of 84.8 from Pro Football Focus and that was the highest among all centers in the Pac-12. He started 18 consecutive games for Stanford to end his career. Dalman also earned first team All-Pac-12 honors in 2020 after earning second team recognition in 2019. His father is Chris Dalman, who also played at Stanford before going to play seven seasons in the NFL with the San Francisco 49ers.

Center Drew Dalman is fun! Undersized but plays well on the move and latches onto blocks. pic.twitter.com/kiJhuIUQjM

Finally, Oregon State running back Jermar Jefferson and North Texas wide receiver Jaelon Darden are Reuter’s choices for the Steelers in the fourth round.

During his three years at Oregon State, Jefferson registered 2,923 rushing yards and 27 touchdowns. He averaged 5.7 yards per carry and was good for 108.3 yards per game over his three seasons. As a pass catcher in college, Jefferson caught 43 passes for 299 yards and two touchdowns. Below is our draft profile on Jefferson.