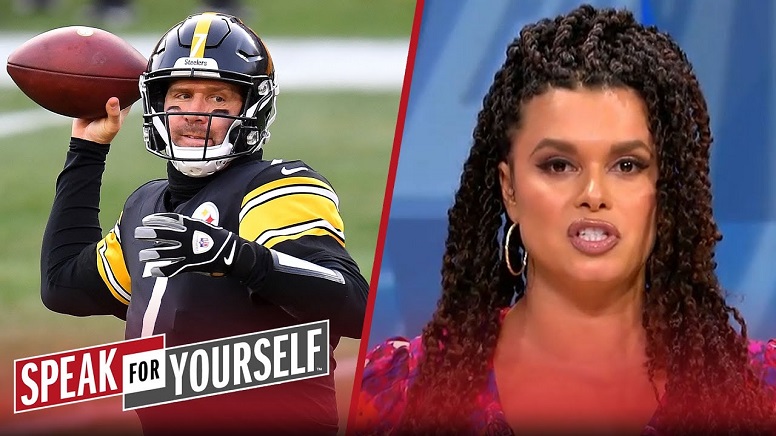 With the decision now made by the Pittsburgh Steelers to bring quarterback Ben Roethlisberger back for the 2021 season, it isn’t hard to find the topic being discussed on the major media sports talk shows and that includes the ones with the mostly hot, yet uneducated takes. Not surprisingly, most of the national media is not a fan of the Steelers decision to bring back Roethlisberger and most believe the organization, in the process, is being too loyal to their franchise quarterback. ‘Speak For Yourself’ host Joy Taylor, who is a Pittsburgh native, said Thursday she thinks the Steelers have lost their way by settling on Roethlisberger for the 2021 season.

You could tell during her Thursday rant about Roethlisberger that Taylor read the comments made recently by team president Art Rooney II regarding the decision to get something done with the veteran quarterbacks contract this offseason that would allow him to return for an 18th season with the team.

Even though the Steelers did get off to an 11-0 start in 2020 and wound up winning the AFC North division, all Taylor can remember is how the team and Roethlisberger played down the stretch and more importantly, how they got blown out at home in the playoffs by the Cleveland Browns. She doesn’t think that the fact that Roethlisberger gave up $5 million of the $19 million he was originally due to make in 2021 was a good enough of a reason to bring the veteran quarterback back.

“We are a loyal city, and they are a loyal organization,” Taylor said as her being a Steelers fan. “So, they’re going to try and make it work with Ben one more year. I think it’s nice of Ben that he restructured and gave them some money and some flexibility, but no, it’s time to move on from Ben Roethlisberger. Apparently, I was the only one that watched the end of that Pittsburgh Steelers season, because while that winning streak was great and it was fun and I certainly enjoyed it, the end of the season was an utter collapse and Ben did not look right. He did not put up great numbers and Ben is at the end of the road.”

Taylor is also cognizant of the fact that the last playoff game that the Steelers won was way back in 2016 when they beat the Kansas Chiefs 18-16 in the Divisional Round.

“When was the last time they won a playoff game?” Taylor asked. “2016? They’ve lost three straight playoff games. You want to talk about Russell Wilson and Deshaun Watson and the value that they have to these organizations, what is Ben bringing to the organization? He’s not a workout guy. He’s not a huge culture guy. His teammates like him, the city likes him, but he’s blocked them from moving forward at the quarterback position and bringing in his heir parent for whenever he decides to retire, which he’s been talking about for three or four years now. They need to make an aggressive move for whoever is up next at the quarterback position.”

The steelers, at least on paper and based on last year’s records of all 32 NFL teams, re set to play the toughest schedule in 2021. That schedule obviously will also include six games against the other three teams in the AFC North.

“And the most important thing since we’re talking about winning the division, is all the other quarterbacks in this division, which by the way, three of those teams were in the playoffs this year, so it is the best division in football, are all young men, Taylor said. Joe Burrow is going to be back next year. We know what Lamar Jackson is capable of. Baker Mayfield is solid.

“What are you guys going to do going into the future after this year? Because if you bring Ben back, that’s great. Cool. Maybe he wins another division. I don’t think he’ll win another playoff game because I think that that time has passed, and the AFC is getting better as we speak. But what are you going to do next year? Are you willing to make a trade to bring someone in like Sam Darnold? Are you willing to make some moves to ensure that you have the next guy that’s going to come in after Ben Roethlisberger eventually does retire? Probably not. I don’t see them making those kinds of aggressive moves.”

Taylor, as you can tell, was pretty fired up about the Steelers deciding to bring Roethlisberger back for the 2021 season and she reiterated one last time how she truly believes the team made the wrong decision in doing so.

“So, no, I don’t think it was a good idea. They’re just keeping a little Band-Aid there,” Taylor said. “They’re being soft. They want to like ease him into retirement or whatever, but I don’t think this is a good move for the Steelers.”