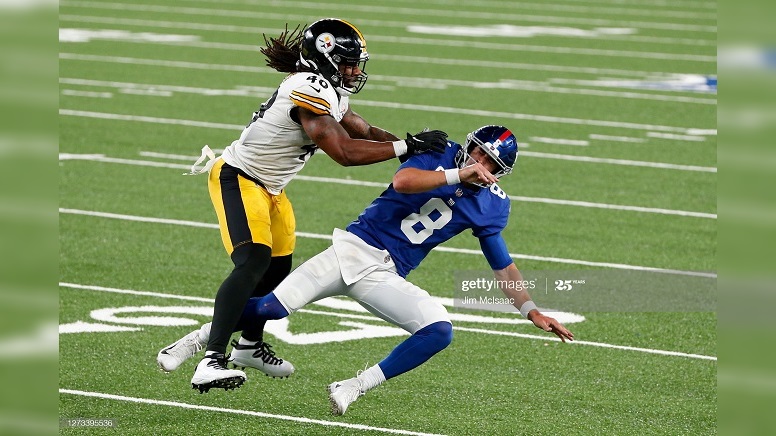 While it might not quite be a forgone conclusion in the eyes of some that the Pittsburgh Steelers will certainly lose wide receiver JuJu Smith-Schuster to free agency in the next three weeks, it pretty much is for sure when it comes to outside linebacker Bud Dupree.

While Dupree’s market value probably took some sort of hit back in December when he suffered a torn ACL in his right knee, it’s still very doubtful that the Steelers will ultimately be able to re-sign their former first-round draft pick out of Kentucky this offseason. That has been my take all offseason and during his Monday interview on 93.7 The Fan, NFL insider Jeremy Fowler of ESPN pretty much said the same thing when asked if gives the Steelers any shot whatsoever at re-signing Dupree.

“No,” Fowler said. “I would be pretty shocked. I don’t know if he’s going to hit like the $18 million number or whatever, but I mean, if his knee checks out, and from what I’ve heard he’s already running around and he’s ahead of schedule already, he should get a massive payday. And they know they can’t really keep up with that. The franchise tag is going to be $19 [million], or whatever it is, they don’t expect to do that.

“So, I think they’re sort of hopeful and they’re going to try just out of courtesy and would love to keep him, but it’s very unlikely when you have to pay a T.J. Watt at $28 million a year. I mean, that’s the reality, right? Like, Myles Garrett, Joey Bosa, they set the market for him and he is outperformed those guys in his first four years. So, you have to make that work.”

Fowler is very much on the money with his assessment of the Dupree situation when it comes to the Steelers. While the team most certainly would like to have Dupree back in 2021, it’s just not feasible from a salary cap perspective and especially if it were only to be a one-year deal.

The only really mystery at this point when it comes to Dupree is seeing which team signs him away from the Steelers and at what price and length of contract. At a minimum, Dupree is probably worth $10 million on a one-year deal. If, however, his knee rehab is going as well as Fowler alluded to on Monday, perhaps Dupree will ultimately sign for $15 million or more and for multiple years at some point this offseason.

In 27 games over the past two seasons, Dupree recorded 19.5 sacks along with 32 hits, 99 tackles, six forced fumbles, two recoveries, and five passes defensed, along with 24 tackles for loss. He was well on his way to a second double-digit-sack season in 2020 before suffering his right knee injury in early December. His 2020 season ended with him having registered 31 total tackles, eight sacks, 15 quarterback hits, two passes defensed and two forced fumbles.

According to a Monday Instagram post by Dupree, he’s in Phoenix, AZ this week. Perhaps he is training there the remainder of the offseason.