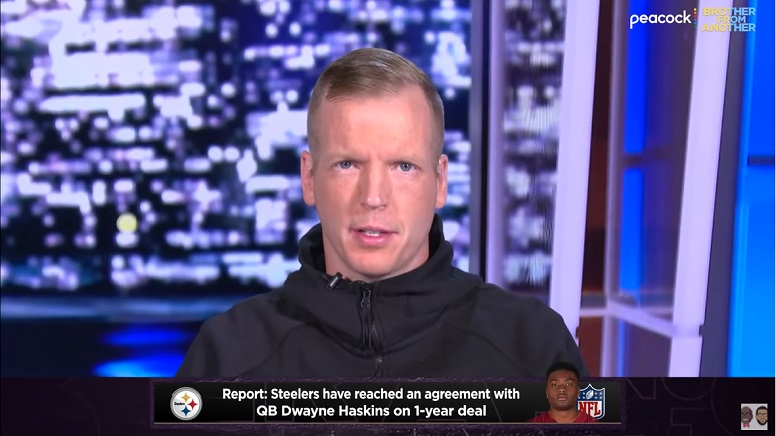 How will things go with new Pittsburgh Steelers quarterback Dwayne Haskins now that he has landed with his second NFL team? It’s hard to say for sure at this point. That said, the Steelers signing of Haskins was a zero-risk deal as evidenced by the former first-round draft pick of the Washington Football Team signing for the NFL minimum. Not that most care, but former NFL quarterback Chris Simms of Pro Football Talk was recently on the Brother From Another show and he thinks Haskins landing with the Steelers was a good move for both parties.

“I mean, I think it’s a very smart signing by the Pittsburgh Steelers,” Simms said of Haskins landing with the Steelers. “You know, I heard everything you guys talked about in that conversation. You brought up a lot of good points, you know, hey, we don’t know what he’s going to be yet. Yeah, he’s a first-round pick. First-round picks, yes, sometimes they can be bust, sometimes they’re superstars. We know that. They’re picked because of elite traits, right? That’s the thing. You’re a first-round pick because evaluators look at you and go, ‘Whoa, he has one or two things that are elite, and he could become a superstar.’ Now, whether that person works and does all the right things to accomplish and really take advantage of his own skills, hey, that’s on the coaching staff, the player, all of those type of things.”

Simms went over the key traits he believes Haskins showed evaluators and scouts that resulted in him being a first-round draft pick a few years ago.

“Dwayne Haskins, to me right off the bat, has two elite traits, right off the bat,” Simms said. “One is his size. Size is a skill, right? Big quarterback, Big Ben, Tom Brady, they can make throws in the pocket that Kyler Murray couldn’t dream of or won’t even attempt. Then the other thing is he does have a big arm. There’s no doubt. It’s a big-time arm. I mean, he can flick the ball all over the field with great ease.”

Simms believes something in Haskins’ favor this upcoming season is the fact that he will likely sit and learn in 2021 and thus not play much outside of during the preseason.

“But the big issue with him and why I like this signing, too, is I don’t think he’s going to be expected to play this year,” Simms said. “I expect us to see big Ben back one more year. That’s what I’m expecting. And this’ll give him a year to mature to what you guys are saying. This is a young kid who didn’t play a lot of college football. He only played one year, and they were the most talented team and they kept things very simple for him when he was playing.”

The biggest chore for Haskins right now is making sure he shows enough during the offseason practices to make the 53-man roster. If he does that, it will be a huge move in the right direction for him. It certainly sounds like he is excited to learn from starting quarterback Ben Roethlisberger in 2021 as well. Assuming Haskins makes the 53-man roster as the Steelers third-string quarterback later this summer, then we can go from there.

Haskins is now on a one-year contract and thus can be easily retained by the Steelers this same time next offseason with a low original round restricted tender. Assuming the Steelers get to that point of needing to decide whether to restricted tender Haskins, that will be a great problem for them to have. In the meantime, however, Haskins just needs to start putting in the work and dedicating himself to the process of living up to him being a first-round draft pick.

“And I heard some of the same things you guys heard from people I really trust,” Simms said of the reports on Haskins not taking things seriously so far in his NFL career. “You know, just immature ways about how he approached the job. You know, last guy in the building, first one to leave. Just didn’t know exactly what it took to be a franchise quarterback yet. I think this kid’s a good kid. I think he does love football and you get to get around a guy like Mike Tomlin and a bunch of other crazy alpha loving football guys, that could get him changed and get him going right in the right direction. I think it’s smart for both sides here.”