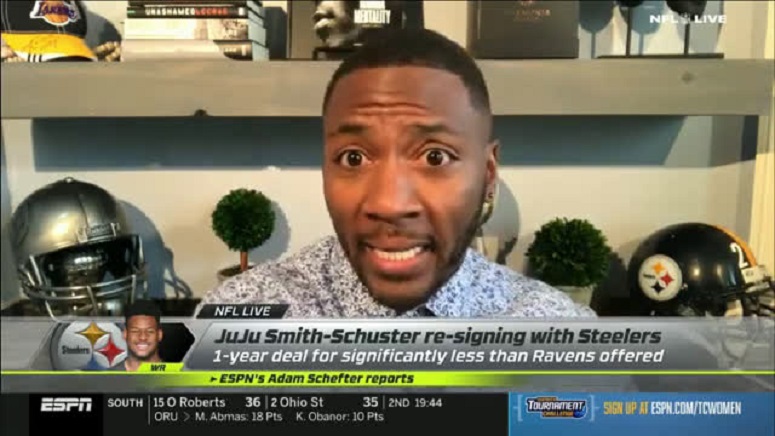 Topic Statement: Ryan Clark was out of line with his criticism of wide receiver JuJu Smith-Schuster, essentially claiming that he doesn’t deserve to be called a Steeler, as though he does not fit the criteria to be worthy of the distinction.

Explanation: If there’s one thing we know about Ryan Clark, it is that he likes to talk as much as he likes to hit. I doubt anybody was surprised when he transitioned into the media when his playing career was over. In such capacity, he has very frequently commented on Steelers matters. Most recently, he took current Steeler JuJu Smith-Schuster to task for things that he views as un-Steelers-like, and rejects his claims that he wanted to stay in Pittsburgh.

For all we know, Clark came closer to leaving the Steelers in free agency than Smith-Schuster ever did. He was once on his way to sign a contract with the Miami Dolphins before he had a change of heart. It’s a nice story and all, but the reality is he damn near left over money—the same thing he’s accusing Smith-Schuster of wishing he had the chance to do.

There is no contradiction between wanting to be with a certain organization but also wanting to be paid in correspondence to your job performance, even if the end result is that you must leave that organization in order to achieve the second desire. Smith-Schuster was offered more to leave Pittsburgh, even if it wasn’t dramatically more, and he chose to return. I’m sure the deal the Dolphins offered Clark wasn’t significantly more than the one he signed to come back to Pittsburgh, so he has no place to talk and was way out of line.

Smith-Schuster is a media personality who (usually, anyway) understands how to play up angles and present himself in the best light—perhaps something that he learned from Antonio Brown, who used to have his own documentary crew follow him around.

It reads well when you choose to stay where you started, even if the reason you choose to stay is actually business and not sentimentality and loyalty. He knows his best shot at cashing in next offseason is to come back to Pittsburgh where he can be a clear top target in a familiar offense.

And Steelers fans will be the first to tell you that he doesn’t fit the conventional ‘Steelers’ mode. He’s not the first California boy to ever play for the team, but he doesn’t carry that humble, blue collar attitude with him when he’s off the field, or at least in front of the cameras, which is too often for the likes of many.

In other words, he’s really not a ‘Steeler’ insofar as there is such a thing as being a Steeler beyond what it says on your contract. He’s talented, and he’s been productive, but he doesn’t embody and personify that qualities that are associated with the organization outside of that—and outside of his charity work.