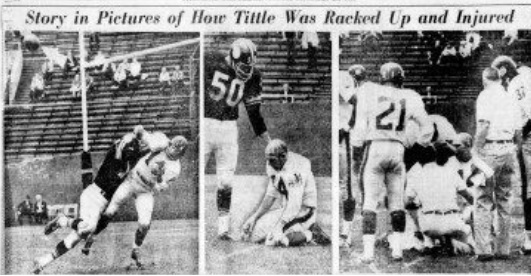 Some Steelers’ fans and football historians may know the story. But many don’t. Walking through the Western Pennsylvania Sports Museum in the Heinz History Center yesterday, there was a photo of Y.A. Tittle. He never played for the Steelers, spending his career with the Colts, part of the 49ers’ Million Dollar Backfield, then ending his career with the New York Giants. But there it was, sandwiched in-between photos of Bill Mazeroski home run trot and Super Bowl XL’s parade.

Those who know the photo know the photo. The veteran Tittle, kneeling in the end zone, helmet off, blood running down his face, effectively marking the end of his career. This award-winning shot was captured by the Post-Gazette’s Morris Berman. 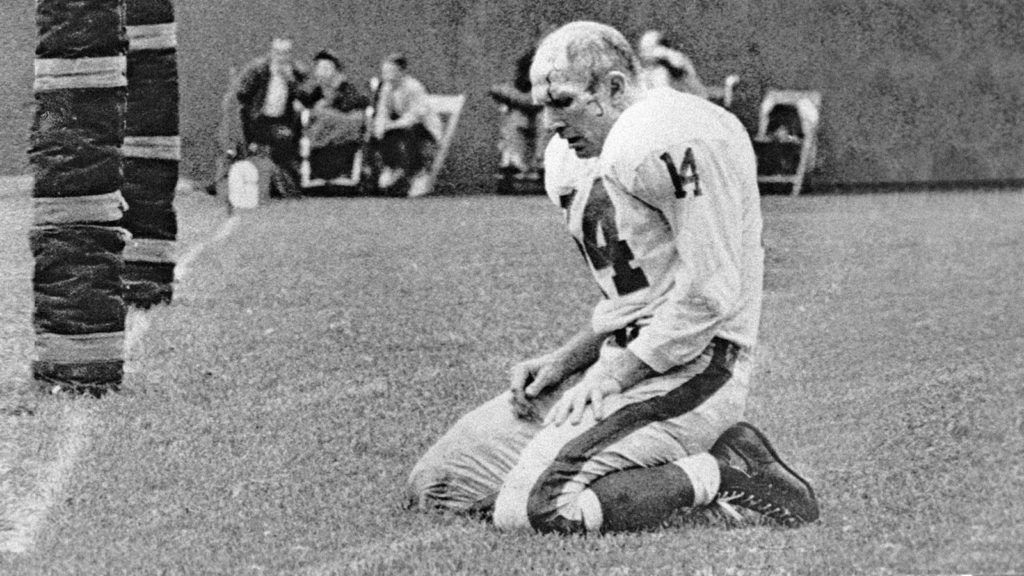 What many people don’t know is the man who inflicted such damage. That was Pittsburgh Steelers’ defensive linemen John Baker.

That game came in 1964. Finding footage from that era can be tough. But there’s at least one clip floating around online. The terrific football Twitter account Old Time Football posted a clip of the game, and specifically of that hit, about a year ago. I’ll include it below.

That play, that hit, was all about revenge. Rewind one year to 1963. It’s the final week of the regular season and the Steelers are coming in hot, sporting a 7-3-3 record, going 3-0-2 over their last five games. A win puts them into the  championship game and second playoff birth in the Steelers’ 30 year history. But Tittle and the Giants dashed those dreams, pummeling Pittsburgh 33-17. Tittle threw for 308 yards and three touchdowns. He went on the be named league MVP. The Steelers went home. Again.

The 1964 rematch had less significant but still important stakes. Week 2 of the regular season. Both teams were coming off losses to start the season. Pittsburgh to the Rams, New York to the Eagles.

The Steelers enacted their revenge. Though the game was close, Pittsburgh’s defense tormented Tittle all game. He completed fewer than half his passes, failed to throw a touchdown, and was intercepted.

It was the interception that followed Baker’s famous hit. On their own eight yard line, Tittle dropped back to his goal line. Baker came screaming off the Giants’ right side, splitting the combo block of the tight end and swimming over the right tackle. Tittle saw Baker bearing down on him and turned to his left to throw a screen to his halfback. He never had the time. Baker hit him as Tittle released the ball, causing it to flutter short. As Baker pile-drived Tittle into the Earth, RDE Chuck Hinton tipped and then intercepted the pass, racing into the end zone for an eight-yard pick-six. That began the Steelers’ 14 point comeback, winning the game 27-24. Tittle was replaced for Gary Wood, who would fare no better.

Here’s the clip with some great quotes from Baker. “I completely attempted to annihilate him. That’s what DL’s are paid to do.”

The next season the #Steelers were out for revenge.
John Baker unloads on Tittle.
“I completely attempted to annihilate him, that’s what DL’s are paid to do”#HereWeGo#BigHitsThread pic.twitter.com/oe6IGGKY1J

Tittle would play in the second regular season meeting that year. But Pittsburgh blew him and the Giants out 44-17. Just a year removed from being named NFL MVP, Tittle retired after the ’64 season.

That play, that hit, that photo, was referenced in both men’s obituaries. The Associated Press’ headline photo announcing Tittle’s death showed that shot while Baker’s obituary mentions the “famous sack of Giants quarterback Y. A. Tittle in 1964 led to Tittle’s retirement.”

Baker would be traded to the Detroit Lions in 1968, one year before Chuck Noll’s arrival, but had fond memories of playing for the Steelers. And especially playing for its owner.

“The best part of playing pro football was working for Art Rooney. He’s a terrific man. Every opportunity I get, I call him just to say hello. I’ve always stayed in contact with him. He was a fantastic man to work for.”

Post-football, Tittle would briefly serve as a coach of the 49ers before starting his own insurance company. He died in 2017. Baker would go on to become the first African American appointed to the North Carolina Parole Board in 1970. He ran for county sheriff in 1978, using that photo of his hit on Tittle as campaign messaging.

“Look what John Baker did to Y. A. Tittle. He’s going to do the same thing to crime in North Carolina,” the caption reportedly read.”

It worked. Baker won and served as sheriff for more than 20 years, following in his dad’s footsteps.

Baker passed away in 2007. But his legacy lives on. Including in places like the Heinz History Center.