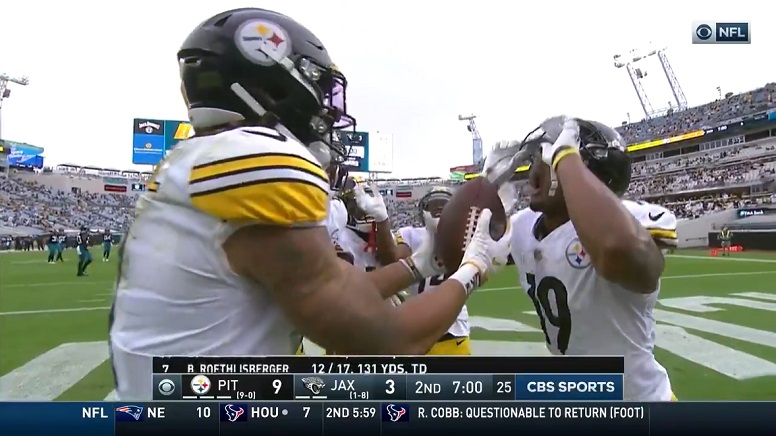 The Pittsburgh Steelers were awarded the Bud Light Celly of the Year on Saturday night during the annual NFL Honors show. The one that won it for the Steelers was the birthday cake celebration in the team’s Week 11 win over the Jacksonville Jaguars.

Following the record-setting 31-yard touchdown reception in the second quarter by Steelers wide receiver Chase Claypool, the team’s entire receiving corps gathered in the end zone. Once together in the end zone, Claypool acted out the lighting of candles on a birthday cake while his fellow eligibles began singing “Happy Birthday” to JuJu Smith-Schuster, who turned 24-years-old on Nov. 22, the day of the game.

After the players all sang to Smith-Schuster, the Steelers wide receiver lifted his helmet and pretended to blow out the candles on the make-believe birthday cake, which Claypool pantomimed by holding up the football.

The touchdown scored by Claypool was his tenth through his first ten career games. The Steelers went on to win the game 27-3 to move to 10-0 on the season.