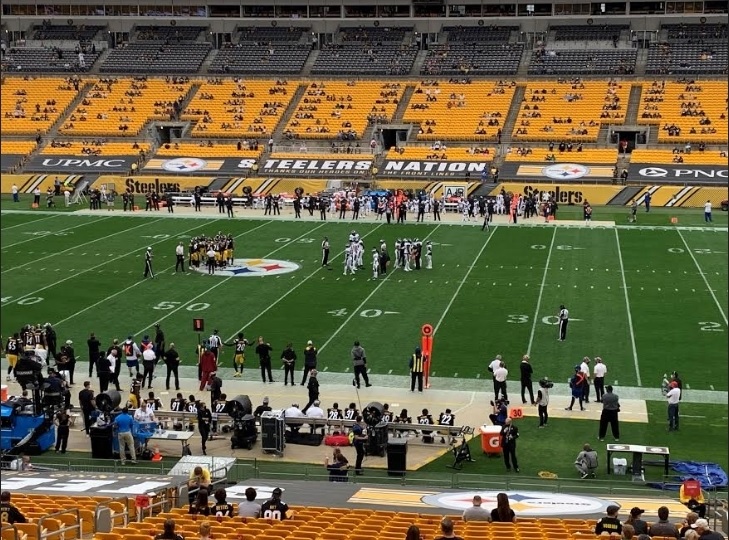 Though predictable given the COVID pandemic, putting a specific number to the Pittsburgh Steelers’ 2020 attendance shows just how unique of a season this past year has been. The Business Journals crunched the numbers for NFL attendance, showing a dramatic drop at Heinz Field from last season to this one.

From the Business Journal.

“Pittsburgh’s Heinz Field saw an average of under 2,000 people for each game it hosted in 2020, a drastic decline from year’s prior. In 2019, the stadium averaged more than 62,000 attendees across its eight home games for a total of more than 497,000 fans, according to figures from ESPN.”

About 5500 fans were permitted starting with the October 11th game against the Philadelphia Eagles and again for the next two home games, the following week versus Cleveland and a final time a month later versus Cincinnati. Fans were prohibited from attending games starting with the rescheduled Baltimore matchup in early December after new statewide restrictions limited attendance before the holidays. Those restrictions were lifted by the end of the regular season but Pittsburgh was unable to get the green light to have fans for their Wild Card game, the only team not to have fans for the playoffs. Including the postseason, Pittsburgh went 7-2 at home.

Of teams who allowed fans at any point during the season, Pittsburgh had the fifth-lowest attendance. Only Minnesota, Arizona, Baltimore, and Washington had fewer. Thirteen teams, including Philadelphia, didn’t have fans at any point over the course of the year.

On the other end of the spectrum, Dallas had the most fans in the stands in 2020, though their attendance drastically fell too. Under 200,000 fans attended games throughout the year, down from 727,000 the year before, over a 70% decrease. Tampa Bay had the fourth highest attendance of just over 100,000. At Super Bowl 55 held in Tampa, over 20,000 fans, 7500 of which were vaccinated health care workers, watched in person.

These hopefully unrepeated low attendance numbers help add perspective to the league’s revenue crunch. Attendance is one reason why the salary cap will fall in 2021, likely landing in the $180-185 million range.

Attendance will likely increase for the 2021 season but it’s unclear by how much. Millions more will hopefully be vaccinated by the start of the season and the United States should be in a better place pandemic-wise by late summer. But there’s no guarantee attendance numbers will reach normal levels. In fact, it’s likely attendance will be capped in most if not all stadiums. 50% capacity may be the norm for teams throughout the year.