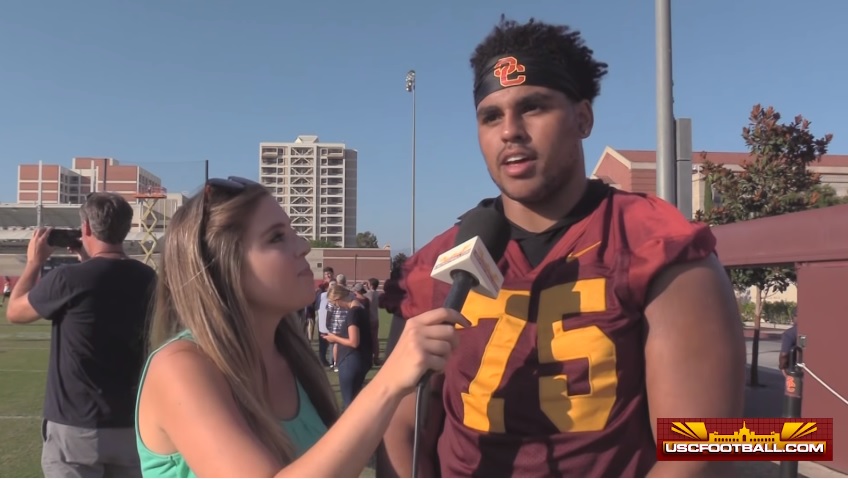 In his latest mock draft, NFL.com’s Chad Reuter is placing a predictable, heavy emphasis on improving the Pittsburgh Steelers’ offensive line and run game. In his league-wide, three round mock draft, he has the team taking USC offensive tackle Alijah Vera-Tucker at #24 overall. Here’s his brief explanation for the pick.

“The Steelers are looking to get tougher up front. Vera-Tucker will certainly do that at left tackle, if Alejandro Villaneuva leaves as a free agent.”

There’s no question the Steelers are likely to have holes along the offensive line prior to the draft. At tackle. Alejandro Villanueva is likely to leave via free agency. Matt Feiler, Zach Banner, and Jerald Hawkins are all slated to do the same though their chances of returning, especially for Banner and Hawkins, are much greater. But as of now, the only tackle under contract for the Steelers whose played on Sundays is Chukwuma Okorafor. Pittsburgh is all but guaranteed to take a tackle a draft during the draft. It’s just a question of when.

Vera-Tucker, listed at 6’4, 315, has extensive starting experience at left guard and left tackle. He played left tackle for the Trojans in 2020. He’s projected to go late on Day One, putting him in play for the Steelers’ at #24.

In the second round, Reuter focused on the Steelers’ defense, mocking them North Carolina LB Chazz Surratt at #55. His mock doesn’t include any analysis or explanations beyond Round One. Undersized at 6’1/4, 227 with 30 inch arms, Surratt did have a productive past two seasons for the Tar Heels. In 2019, he recorded 115 total tackles while picking up 91 in 11 games in 2020. All this after beginning his college career as a quarterback, throwing eight touchdowns in 2017 for UNC. Inside linebacker could be bolstered if the team is able to find a highly athletic player but unless Vince Williams is cut, it’s not one of the team’s most pressing needs.

Finally, Reuter circles back to the offensive side of the football by mocking Pittsburgh Jaret Patterson in round three at pick #87. The Steelers love college production out of their running backs and few boast Patterson’s numbers. In just three seasons at Buffalo, he ran for over 3800 yards and 52 touchdowns, averaging 6.1 yards per carry. In 2020, he had one of the wildest stat lines for any running back in college football history, running for over 409 yards and eight TDs to beat Kent State. Patterson rushed for at least 298 yards on three different occasions in his career and in four games, he rushed for at least four scores. Size (5’9, 195) and versatility (he didn’t catch a single pass in 2020) are his question marks along with obvious competition concerns.

Overall, Reuter’s projections are relatively sound for a big-media mock. He highlights two of the teams biggest needs are positions they’re likely to address within the first two days of April’s draft. The Surratt selection is the most debatable of the three. Look for scouting reports on all three names throughout draft season.