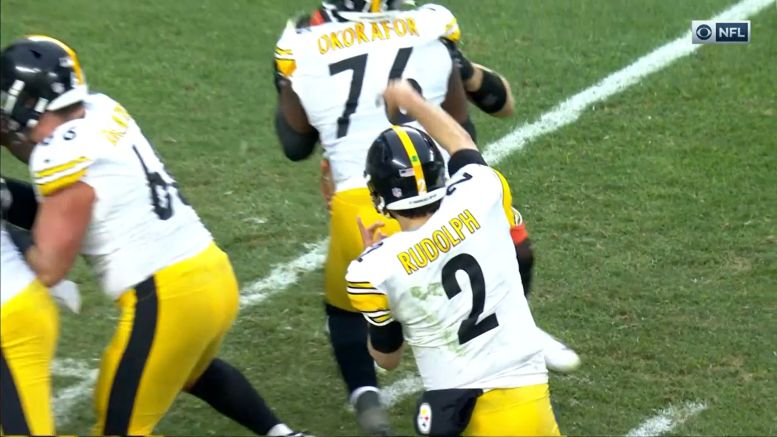 The youngest of the Steelers’ starting offensive linemen at just 23 years old (yes, he is, in fact, younger than 2020 rookie Kevin Dotson, before anybody thinks to say anything), Chukwuma Okorafor entered the starting lineup last season in his third year through the back door.

The team held a competition for the starting right tackle position after they kicked Matt Feiler inside to guard, with Okorafor competing with fourth-year Zach Banner. The two, along with Jerald Hawkins, were all part of an open competition for the job the year before, which Feiler won.

Banner beat out Okorafor this year, and started the opener, but he suffered a torn ACL late in the game. That left Okorafor to play the rest of the year. While he did not play spectacularly, by any means, he did at least hold up, for the most part.

It must be said that run blocking was not his strength. That could be said for any of the starting offensive linemen, but it was of particular concern for Okorafor, who could clearly stand to grow in this area. Pass protection was also occasionally a mixed bag, but the short time-to-throw helped.

Entering the final year of his rookie contract in 2021, will Okorafor retain a starting job? It kind of depends on what else happens. If they re-sign Banner, he could start at right tackle. In that event, they could move Okorafor over to the left side to replace Alejandro Villanueva. Or Feiler could be brought back instead.

Or they could draft a rookie who comes in and takes over one of the starting jobs and pushes Okorafor back to a reserve role, which is where he spent the majority of his first two seasons. Through three years in the league, he has so far shown that he’s a player with whom you can get by, but which you might be looking to upgrade. Of course, there’s always room for growth, and perhaps a new offensive line coach could get more out of him.