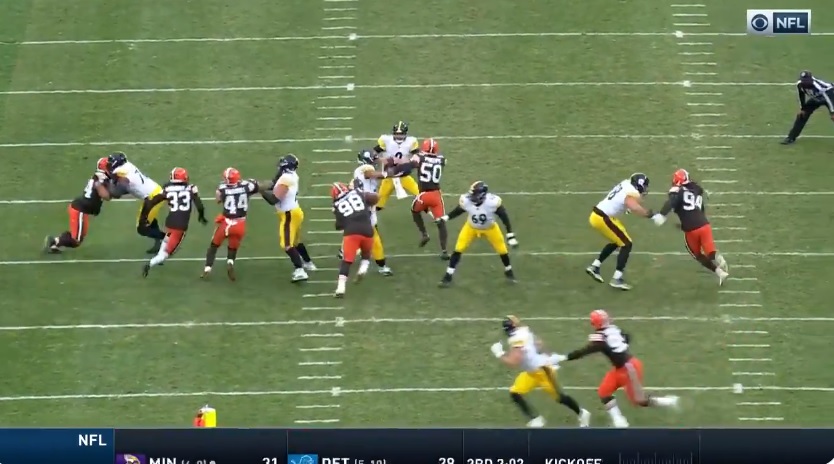 Winners and losers from the Pittsburgh Steelers 24-22 loss to the Cleveland Browns Sunday.

Chris Wormley: Team run defense wasn’t great today but I can’t pin all that on Wormley. Wormley made an impact as a pass rush, recording the defense’s first sack of the day to extend their sack streak to 73 games. He applies pressure later in the half that Alex Highsmith cleaned up. Wormley’s depth is worth keeping around on a cheap, two-year contract in the offseason.

Alex Highsmith: Gets better and better with each game. He set the edge, got off blocks, and performed well against LT Jedrick Wills, whose having a stellar first season for Cleveland. Highsmith finished with a sack and his pressure caused another one, finished off by Stephon Tuitt.

Little question he’ll be the Steelers’ starting ROLB Week One of next season.

Kevin Rader: Rader played like a dude getting the chance to suit up for the first time in his career, as he was today. Dude was amped up. Might be the best blocking TE on the roster already who finished his blocks, pushed the pile, and had two tackles on kick coverage.

Matthew Wright: Wright’s kickoffs are underwhelming but as a kicker, he was excellent Sunday. Booted a pair of 46 yarders with room to spare on each. Leg strength was his biggest concern coming out of college. Steelers still better with Chris Boswell and hopefully he’ll return next weekend, but Wright is offering some level of confidence if Boz can’t.

Chase Claypool: Claypool hit some of those records Matthew Marczi wrote about earlier in the week. With his fourth quarter touchdown, he tied Franco Harris and Louis Lipps for most TDs by a rookie. That was his 11th score of the season. He also broke Troy Edwards’ record for most receptions by a rookie. Heck of a year for him and that was even with a handful of quiet weeks in the last quarter of the season.

Mason Rudolph: Rudolph’s biggest issue is pocket presence, awareness, and what happens when the pocket is muddied. There’s no question about that. But Rudolph also definitely didn’t look like the same “deer in the headlights” dude last season. Rudolph made more plays downfield than Ben Roethlisberger has in the last month combined, peppering Diontae Johnson and Chase Claypool with targets. It was far from perfect and we can talk about this dude’s warts that may never get corrected – or only slightly improve – but Rudolph was fearless today and throws a pretty deep ball.

Run Defense: Not very good today. Which is no surprise for a lineup missing Cam Heyward and TJ Watt in addition to being without Bud Dupree or Devin Bush for weeks/months. Nick Chubb busted a big 47 yard TD for the game’s first score thanks to missed tackles by Cam Sutton and Minkah Fitzpatrick. And Chubb consistently found yards against the Steelers’ backup linemen. It’s only surprising Cleveland didn’t run him more.

Offensive Tackles: Mason Rudolph’s pocket presence is still his biggest flaw but Alejandro Villanueva and Chukwuma Okorafor weren’t stellar. Villanueva had his usual fits with Myles Garrett while Okorafor was beat by Oliver Vernon for a sack.

First Quarter Offense: Ends on the same note they’ve been playing for the last two months. With nothing. Today was more understandable without Ben Roethlisberger but the Steelers have now gone seven straight first quarters without a single point on offense or special teams. Their only points have come from Joe Haden’s pick six against the Ravens. The offense has just one touchdown in their last ten first quarters and the offense has scored just one opening drive touchdown in the last two seasons. That’s going to have to change for the playoffs.