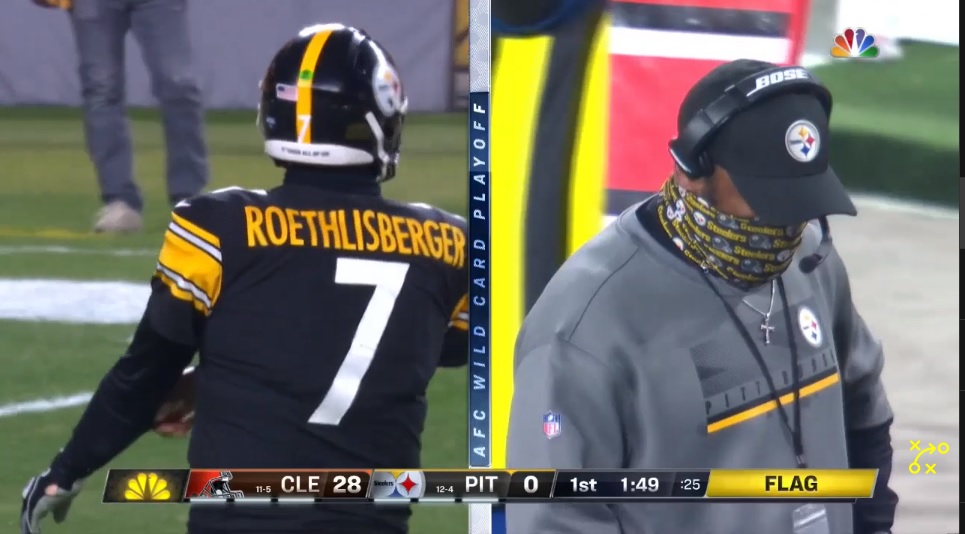 It’s been ten seasons since the Pittsburgh Steelers last trip to the Super Bowl. Despite having a Hall of Fame quarterback and generally regarded as one of football’s best organizations, they don’t have much to show for it. Only six playoff berths. Just three playoff victories. One AFC Title Game. No returns to the big game.

There’s no arguing the Pittsburgh Steelers are one of the league’s most stable organizations. Same head coach since 2007. Same GM since 2000. Same ownership since the day the franchise was founded.

But over the last decade, they’ve also become one of the most static organizations. This team is good, not great. Always the bridesmaid, never the bride. Every season plays out the same. Limitless hope come August, in the playoff mix come December but either falling short at the end of the regular season or when they’ve made it, a quick exit from the playoffs when they’ve made it.

Retool for next year. Forever the mantra.

It’s difficult to buy into that philosophy for this upcoming offseason. As we wrote about at the beginning of the year, right before the Week One opener against the Giants, 2020 was the best chance to make a Super Bowl run. All the pieces were in place. A healthy Roethlisberger and his weapons. A defense that played out of its mind in 2019. Special teams that wouldn’t cost you games.

But the ending remains the same. It’s remarkable how similar 2017’s loss to Jacksonville and Sunday night’s defeat to Cleveland are. Offenses digs a big hole early thanks to turnovers. Defense struggles to get a stop, generates zero pressure, and a second half surge once Roethlisberger figures things out isn’t enough. Both games even had the garbage-score TD to make the game appear closer than it was.

So it’s been three years? And ultimately what changed? Nothing.

This isn’t the defining legacy of Ben Roethlisberger or Mike Tomlin. Long after their careers end, most will focus on the successes of the front-half of their tenure. Roethlisberger’s quick rise to stardom, winning Super Bowl XL for Jerome Bettis in 2005. Tomlin for becoming the youngest head coach in football, quickly capturing a Super Bowl to prove all the doubters of the hire – at the time, there were many – wrong.

But this era feels like the start of a really great book someone forgot to finish.

It’s hard to believe with so much talent the Steelers have, they’ve done so little. At one point, they had Roethlisberger paired with Antonio Brown and Le’Veon Bell. Brown was a walking, talking circus but the best receiver in football. Bell was one of the top backs, if not the best back who fit the offense perfectly. And the offensive line was a fantastic, cohesive starting five.

Couldn’t win with them.

Present day, the Steelers’ defense is littered with unbelievable talent. Cam Heyward is one of the most complete defenders to ever don the black and gold. TJ Watt and Minkah Fitzpatrick may legitimately end up in the Hall of Fame someday and I promise my black and gold colored glasses are only influencing that statement like, 10% max. They have all the makings of what defenses need to be successful.

Haven’t won with them.

A shorter timeframe than the AB era but the future doesn’t look as promising as the present.

When the roster gets worse next season, where will the Steelers end up? The AFC North might be football’s most competitive division. Baltimore’s probably going to get better. Lamar Jackson will improve. The Browns will certainly improve. Those teams are on the upswing. Even Cincinnati will improve, though to what degree remains to be seen.

In the rest of the Roethlisberger era and the years after it, what’s the best case scenario for them? Squeak into the Wild Card at 9-7, 10-6, going on the road as a 6th/7th seed? Some years fail to make the playoffs at all?

2020 was Pittsburgh’s best shot. They came up way short.

Let’s say you wanted to torch the roster. Push Roethlisberger off the team. Fire Tomlin. Turn the page. What’s the plan to build back? There’s no cap space. No marquee draft picks – Pittsburgh’s selecting 24th come April. Tons of holes that are about to start leaking. They’ll need to address the offensive line, likely looking for Alejandro Villanueva’s replacement at LT and Maurkice Pouncey’s eventual successor at center. David DeCastro isn’t getting younger and coming off a poor season, especially by his standards, though early-year injuries may have played a factor. There’s openings at running back and wide receiver if James Conner and JuJu Smith-Schuster are gone. Pittsburgh has plenty of talent at wideout even if Smith-Schuster walks but there’s no easy transition to Smith-Schuster’s slot skillset. Defensively, nickel corner is up in the air with Mike Hilton and Cam Sutton looking to cash in. And Justin Layne isn’t looking like Joe Haden’s heir while Steven Nelson’s deal expires after the 2021 season.

None of these problems are new or surprising. They’re issues we’ve foretold for months now. The aim was to deal with those issues on the back of a Super Bowl contending season. It makes the medicine of “how to fix half this roster” go down a lot easier.

Tomlin has his work cut out for him.

With Roethlisberger, the Steelers will always have a chance. Always. They’re not going to be a terrible team. And unlike others, I’m not advocating for the Steelers to move on from him. He should be the Steelers’ starting QB as long as he’s capable.

But it’s looking like the final ten years of his career were an afterthought. Mediocre resume, a whole three playoff wins, for a Hall of Fame talent.

Since 2011, the Pittsburgh Steelers have had a great quarterback. But they’ve only ever been a good team. There’s one word to describe this era.

Roethlisberger was supposed to get another ring. Now, it’s unlikely to happen.

And when he’s gone, good luck predicting when the Steelers will ever be in the hunt for another.