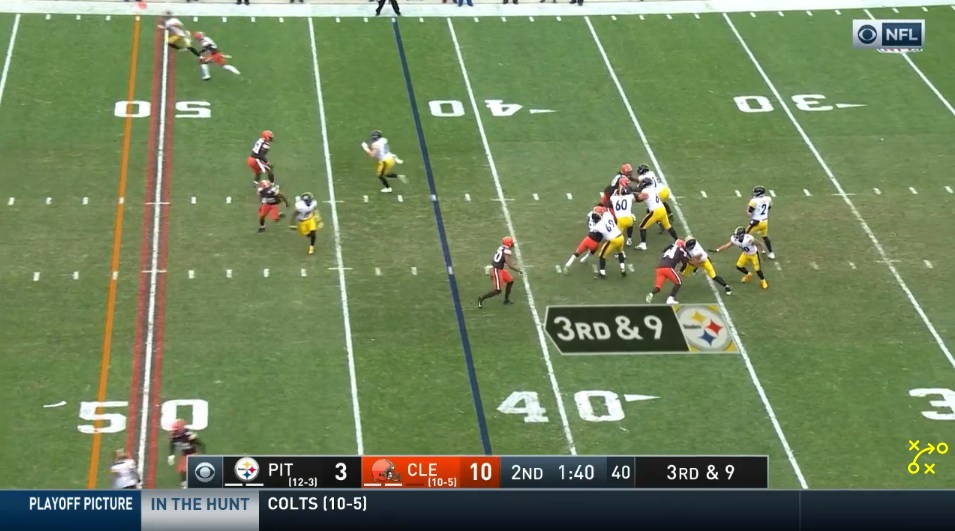 Credit whoever you want. Whether that’s Ben Roethlisberger and his quick release, receivers who get open, or the offensive line. Really, every unit deserves ginormous amounts of credit. The result is the same. At a time where maybe it’s as difficult as ever, the Pittsburgh Steelers are a historically good pass protection unit.

Defenses are built around one thing. Getting after the QB. That’s why the top players in football are pass rushers. It’s why the Steelers will back up the money truck to TJ Watt’s house this summer. It’s why every single week, we’re talking about some element of pass rush. Either the importance of Pittsburgh generating it or the importance of the Steelers preventing it.

And teams are throwing more than ever. Ben Roethlisberger still finished third in the league in pass attempts this year despite sitting out yesterday’s finale. Almost every offense is designed to win through the air. If you don’t have a franchise QB, if you don’t have a team where the passing game is driving the bus, it’s hard to be Super Bowl contenders. That makes every offense’s mission to protect their QB.

No one did it better than the Pittsburgh Steelers. Their QBs were sacked just 14 times in 16 games. Not only was that the best mark in the league, it’s the fewest they’ve allowed since the 1970 merger.

Credit three areas for that. Start with the obvious. The offensive line. Those guys get killed for one sack allowed, one pressure given up. It’s nature of the job. Only bad things occur when you hear their name. This group went long stretches of flawless football, even without a run game and Ben Roethlisberger slinging the ball all day. Here are some of their attempt-to-sack numbers throughout the season.

Check out those mid-season numbers. Collectively, the Steelers set the second longest sackless streak of the past 50 years. And that’s not all Roethlisberger either. Overall, Rudolph was well-protected yesterday against the Browns’ impressive rush. They play in an AFC North facing two aggressive, talented fronts in Cleveland and Baltimore and they’ve held those guys in check. Over an entire season, one as long and tiring as what Pittsburgh experienced (and linemen don’t get the luxury of coming out of the game), this group held up extraordinarily well.

Of course, this stat wouldn’t be true without Roethlisberger’s evolution. You know his story. Came into the league as gunslinging Big Ben, willing to take a sack (or twenty) as the cost of doing business for his wacky, sandlot plays. That strategy is possible when you’re 24. Not so much when you’re 34 and your knees have had a dozen surgeries. Roethlisberger evolved into a QB more dangerous from within the pocket than outside of it.

In 2007, he had the league’s second highest sack rate (10.4%). In 2020, he led the league with the lowest sack rate (2.1%). I don’t know if there’s been another QB in history with that kind of contrast. It’s no secret his lightning quick release, fastest in football, reduces the odds of getting sacked.

For Roethlisberger to get the ball out so quickly, receivers need to get open, too. And this team is full of them. Whether that’s Diontae Johnson and his ability to win in space, the trust that exists in JuJu Smith-Schuster to make the play even in the most contested situations, the big-play ability of James Washington, or Chase Claypool’s record-setting rookie season, this team is loaded at receiver. Eric Ebron made an overall positive impact on the passing game as well. Life is easier when you have those kind of weapons to throw to. Night and day difference from last year when Johnny Holton and Tevin Jones were trying to get open.

Offensive line. Quarterback. Receivers. Having just one or even two of those elements isn’t enough for a historic season like the Steelers are enjoying. All three facets have to come together. Line protects, quarterback reads, receiver gets open.