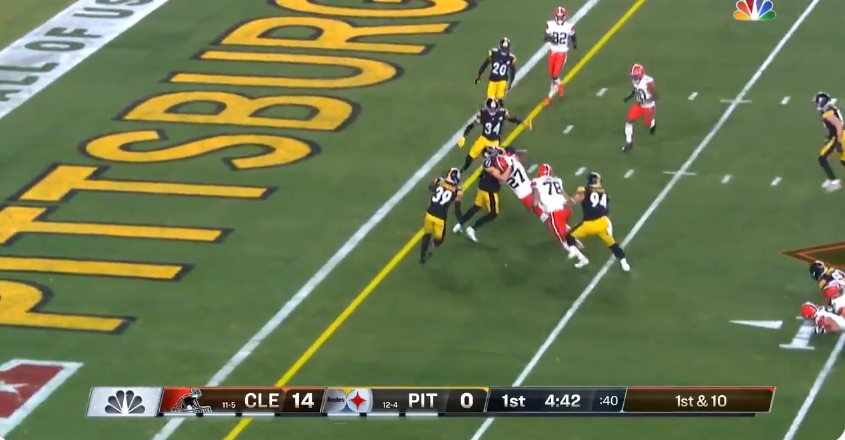 A high snap that immediately swung the momentum from the beginning led to the downfall of the 2020 Pittsburgh Steelers playoff run in the Wild Card round. The Cleveland Browns started fast, and outlasted the Pittsburgh Steelers, 48-37.

As mentioned above, the Steelers had one of the worst starts to a game all season, as Center Maurkice Pouncey snapped the ball over quarterback Ben Roethlisberger’s head on the first play of the game. The ball was recovered by the Browns for a touchdown. The Browns led 7-0, just 14 seconds into the game.

On the Steelers next possession, they picked up one first down before trouble struck again. This time, Roethlisberger’s pass was intercepted by M.J. Stewart Jr., giving them the ball in Steelers territory.

The Browns offense only needed three plays on the ensuing drive, as Baker Mayfield connected with Jarvis Landry for a 40 yard touchdown. The Browns extended their lead to 14-0 with 9:46 left in the first quarter.

The Steelers offense could not get in sync and forced into a three and out, giving the Browns the ball back quickly on the next drive.

Big runs of 17 and 20 by Browns running back Nick Chubb would put them in the red zone on the ensuing possession. A few plays later, Kareem Hunt would find the end zone for an 11 yard touchdown. The Browns expanded their lead to 21-0 with just five minutes left in the first quarter.

Big Ben would make another mistake, as he was intercepted on the next drive by Browns defensive back Sheldrick Redwine. Redwine would return in 30 yards to put the Browns at the Steelers 17 yard line. Hunt would finish that drive off with an eight yard touchdown, giving them a huge 28-0 lead with under two minutes left in the quarter.

The Steelers offense would settle in, and bleed some clock. They moved the ball into Browns territory, but the drive stalled. They would punt, and just a few plays later, the Browns would punt back to the Steelers/

After the Steelers got the ball back, Roethlisberger was intercepted for the third time in the first half, this time by Porter Gustin. However, the Browns would not capitalize, as they ended up punting.

The Steelers offense finally made some big plays halfway into the second quarter, as Big Ben and James Washington would connect for three consecutive completions for big yardage. After a Diontae Johnson first down, the Steelers would inch closer, and finally got on the board with a touchdown on play 13 of the drive. James Conner scored from a yard out and the Steelers cut the lead to 28-7 with under two minutes left in the second quarter.

The Browns would answer, however, in just over a minute drive that resulted in a touchdown. Baker Mayfield found Austin Hooper for a seven yard touchdown. The Browns led 35-7 with 34 seconds left.

However, the Steelers would get into field goal range and connect on a 39 yard field goal to cut the Browns lead to 35-10 at the half. Remember that field goal, as it served as the Steelers momentum swing in the second half.

The Steelers made a statement coming out of halftime, forcing the Browns to punt to start the second half. The Steelers wouldn’t take long to score on the ensuing drive, as Big Ben methodically moved them down the field. He found Eric Ebron from 17 yards out for a Steelers touchdown. They attempted a two point down conversion and failed, making the score 35-16 just over seven minutes left in the third quarter.

The Steelers would force a Browns three and out on their next possession, giving the Steelers the ball right back. Diontae Johnson and JuJu Smith-Schuster would make big plays on the next drive, moving the ball near the red zone. On a fourth and goal, Big Ben would find Smith-Schuster for a touchdown, cutting the Browns lead to 35-23 with under three minutes left in the third quarter.

The Browns would take advantage and score on a 40 yard Nick Chubb touchdown on play six of an 80 yard drive. The score gave the Browns a 42-23 lead early in the fourth quarter.

But the Steelers would not go away. A 27 yard catch by Smith-Schuster the following drive gave him 100 yards on the night and moved them deep into Browns territory. The next play Big Ben found Chase Claypool for a 29 yard touchdown. The Browns lead was cut to 42-29 after the Steelers missed their two point conversion attempt.

The Browns would chew up six minutes of game clock on their next drive. Timely completions to Landry and Hunt help the Browns move the ball into Steelers territory. Their drive would stall after earning a first and goal, but a Cody Parkey 24 yard field goal gave the Browns breathing room with four minutes to play.

As hard as the Steelers fought in the second half, the game was all but sealed after Big Ben threw his fourth interception late in the fourth quarter. Sione Takitaki would catch it and return it into field goal range. The Browns would add another field goal to extend their lead to 48-29 with three minutes to go.

Big Ben would engineer one last drive and throw a short touchdown to Chase Claypool, his second of the day. The Steelers would convert the two point conversion, pushing the final score to be 48-37. The Cleveland Browns move on to face the Kansas City Chiefs.