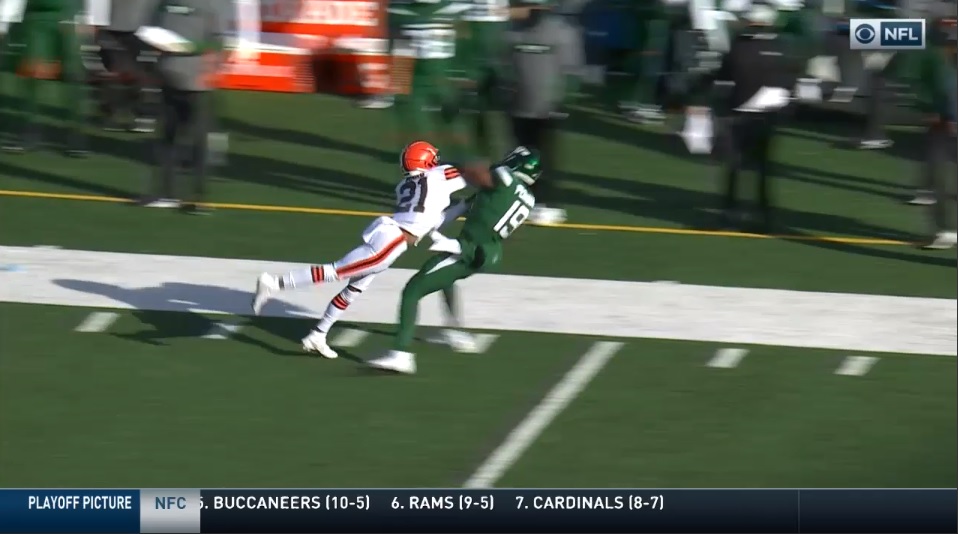 Cleveland’s run defense has been average to slightly above. Allowing 4.3 YPC, 13th in football, and 16 TDs, which is squarely average. They run an even, 4-3 front with plenty of talent up front. Guys like Sheldon Richardson, Larry Ogunjobi, and Myles Garrett.

They will be without several key pieces who are part of their front seven/run stopping front. They’ll be without their top three leading tacklers Sunday: LB BJ Goodson (91 tackles), LB Malcolm Smith (72 tackles), and SS Andrew Sendejo (67 tackles). Big losses across the board.

With those guys, they’ve been one of the better run defenses in terms of not allowing big plays. Their 42 runs of 10+ yards allowed are tied for 8th fewest while their six runs of 20+ yards are tied for fifth best.

Getting the run game going versus the Browns starts with controlling NT Larry Ogunjobi. That’ll be tougher presuming Maurkice Pouncey doesn’t suit up, leaving JC Hassenauer to start at center. Ogunjobi is a strong player whose hard to reach. Watch the Jets’ center be unable to cut him off here and Ogunjobi blows things up.

Small thing to note. Here’s one way they play any down block from the backside tackle, like on zone plays away. The DE will immediately crash as he sees the tackle block down and the WILL linebacker will scrape to play any cutback or split zone action, like you see here.

Some other defensive stats for you. Tied for the 21st ranked scoring defense, allowing 26.5 points per game. Like their offense, they’ve had some really good performances but also some forgettable ones. Seven games this year allowing 30+ points, tied for 6th most in the NFL. Below average third down defense (43.6% conversion rate – 22nd) and slightly above average performance in the red zone (61% – 14th).

An average to slightly below average group missing a couple pieces in the secondary. In addition to missing Sendejo as we mentioned above, they could also be without S Karl Joseph and definitely will be without CB Denzel Ward. So this is a pretty good matchup for Mason Rudolph, all things considered.

Some numbers. They’re 17th in YPA allowed at 7.2, and an ugly 24th in allowing 29 passing touchdowns this season. They are getting an above average amount of sacks with 37. That, of course, is led by Myles Garrett’s 12. He’s 6th in the league and done that in just 13 games after missing time earlier in the year on the COVID list. Predictably, he also leads the team with 18 QB hits, though that’s a lower number than what I would’ve guessed.

What’s interesting is despite their decent sack numbers and overwhelming talent up front, their pressure rate is paltry. Just 28th in football. Perhaps one reason for that is their ultra-low blitz rate. Similar to the Colts and like a lot of 4-3 defenses, the Browns don’t send much additional pressure. They rank just 30th, blitzing 21.1% of the time. It’s seemed to be effective when they do call on DBs to attack the QBs, just in the way the Colts lone sack last weekend come on a safety blitz. Cleveland DBs have totaled four sacks this season and they’ve come from multiple sources.

In the pass game, they do a respectable job keeping a lid on things. Tied for the top ten in passes of 20+ allowed (44 this year) and tied 11th in completions 40+ yards (only seven).

Quick look at their scheme. Play a lot of man coverage, specifically Cover 1, on third down. Want to force a tight-window throw. Usually have a LB lurking underneath since they don’t blitz much.

Steelers like to run plenty of trips bunch sets to try to create picks and free releases. Here’s an example of Cleveland’s “box” call, 4 over 3, to try and combat it. In these situations, QBs are better off throwing to the backside X receiver.

And a pretty healthy amount of Cover 4/quarters. Safeties have less ground to cover and can line up closer to the LOS to support the run.

We’ve reached the final game of the regular season with the division title wrapped up.  The Steelers plan to rest some starters but the Browns don’t have that luxury still fighting for playoff spot. The Browns have also been dealing with their own Covid issues this week so who actually ends up playing this week is still up in the air. Let’s take a look at the Browns defenders.

The defensive tackles are a four man rotation. Sheldon Richardson is a force up front with very good play strength and quickness. He diagnoses plays well with eyes always on the ball and sheds blocks well.  He has a good bull rush and good quickness on twists and for good measure he blocked two kicks last week. Next to him is Larry Ogunjobi who has a great motor and anchors well able to stand his ground and split double team blocks. He has very active hands and likes to use a club/swim getting after the quarterback.  Behind them is rookie Jordan Elliott who shows good burst at the snap with good lateral agility. He has the strength to shed blocks and has a good motor.  Vincent Taylor is a big bodied, stout defender with good agility, solid use of hands and pursues all over the field.

Richardson (98) is on the right hash. He will slide to his left and hold off the (364 lb.) tackle with his right arm before shedding him to the inside to make the tackle.

The defensive ends are led by impressive pass rusher Myles Garrett. He has very good quickness at the snap and uses his hands well to disrupt blockers. He is athletic and can win with speed or power. On the other side is Olivier Vernon who is more effective with power rushes including a bull rush and push/pull move. Against the run he has good quickness to get in the inside gap but can be walled off on the edge. Adrian Clayborn displays solid mental processing and a high motor getting after the quarterback. He likes to use a rip rushing around the edge and will kick inside on passing downs. Porter Gustin is a high effort player with solid strength and adequate athleticism. He his better against the run than pass and is best playing from the backside of the play.

Vernon (54) is on the left side of the screen. In this pass rush he will start with a bull rush, then yank the jersey of the tackle and then rip with the inside arm to get the sack.

The linebacker position has been shuffling a lot of players due to Covid issues.  B.J. Goodson, their MIKE linebacker, is currently on the Covid list. He is solid at processing plays and smoothly flows to the ball. He works through traffic well, is a good tackler and takes good angles in space. Mack Wilson has played SAM and WILL linebacker and has very good aggressiveness to fight through gaps and shed blockers. He diagnoses plays well and flies to the ball wherever it goes. Sione Takitaki has good athleticism and gets downhill quickly to fill gaps. He has the speed to chase across the field and is solid setting the edge. Malcolm Smith played the MIKE last week and the veteran has adequate athleticism and poor change of direction but is solid filling gaps and constricting running lanes. Jacob Philips is also on the Covid list and he has good athleticism and speed, can play all three linebacker spots but will overrun gaps in the run game. Elijah Lee is a good athlete and fluid mover who is strong on special teams. Tae Davis likes to hit, closes on the ball quickly and has solid coverage skills.

Wilson (51) will diagnose this play quickly and finds the correct line into the backfield to make the tackle for a loss.

Safety has also been hit by the Covid issues. Karl Joseph and Andrew Sendejo are both on the list. Joseph is a box safety that plays like a linebacker, diagnosing well against the run and is a good tackler in the short areas. He has solid awareness in Zone and is adequate in Man.  Sendejo is usually the deep safety and is better when playing downhill against the run or on crossing routes. Hiss range is adequate and he’s a solid tackler.  If they are out the safeties will likely be Ronnie Harrison who was just activated from injured reserve (shoulder) and Sheldrick Redwine. Harrison has good versatility to play Cover 1/Cover 2 or in the box. He is aggressive against the run, has good awareness in Zone and the speed to close on the ball. Redwine has good size and has adequate range. He looks hesitant playing deep and wasn’t very physical as a tackler in the games I watched. They also have Jovante Moffatt and Montrel Meander on the roster but neither has gotten many snaps on defense. Both have very good size and are special team contributors.

Harrison (33) is in the slot to the right and will drop into Zone coverage. He picks up the crosser coming from the other side of the field and hangs back to bait the QB into making the throw. The result is a pick 6.

Denzel Ward is the headliner of the cornerbacks. He has a very good athlete, can play in just about any coverage and supports the run. He loves to attack the ball has good speed to click and close leading to 18 pass break ups this year. Terence Mitchell plays on the other side and is usually in Press or Off Man coverage.  In Press he can be beat over the top (see Chase Claypool in week 6) and in Off Man he gives up space in front of him. He goes after the ball after the catch forcing three fumbles.  Kevin Johnson is the veteran nickel corner and he is often in Off Man coverage, has solid awareness in Zone and likes to hit. Tavierre Thomas has solid speed and adequate agility and has struggled in coverage this season.  M.J. Stewart rounds out this group and is a good tackler, has solid footwork and likes to undercut routes but can get grabby in Man coverage.