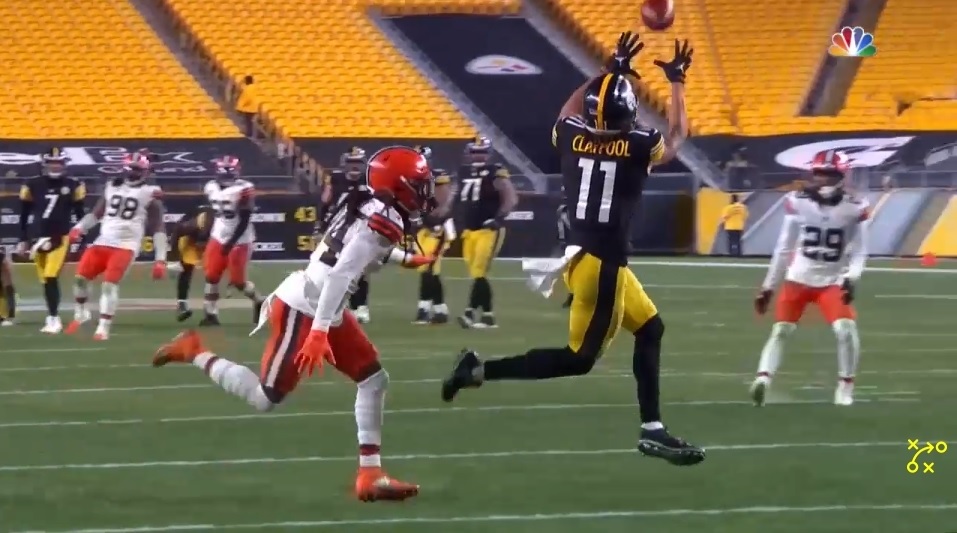 Claypool set a career high with seventy snaps in the Wild Card game.  His route tree was more diverse in this game. Normally it is tilted toward the deep routes but with Cleveland playing a lot of Zone coverage he ran more underneath routes.  He ran at least seven different routes at least three times and Curl routes led the way. He made good use of his size and strength to create space at the top of shorter routes.

He would have had an additional target on a play where the quarterback wanted to make a quick pass but he never looked for the ball as you can see in the video below. When they ran this formation again he had a chance to make a block to help James Conner but did not engage.

His first reception was on a whip route where he caught the ball at three yards, ran backward four yards and was gifted a one yard gain. He made a smart play at the end of the second quarter making a catch and getting out of bounds to set up a field goal attempt.  He added a catch early in the third quarter where he lowered a shoulder and got eight yards after the catch.

His final receptions were both touchdowns. The first he ran a nice route pressing to the outside and cutting back in on a skinny post. He got help when the safety to that side came down toward a shorter route to open up space for Claypool. His final reception was a quick out using his body to get the defender off of him.

One critique I have for him is his blocking both on offense and on special teams.  He has the ability and size to control defenders and he just doesn’t sustain blocks.

Here is the play where Claypool (11) didn’t look at the quarterback who is looking to make a quick pass. He is stacked at the bottom of the screen and heads toward the safety looking to block.

It was a quiet game for Highsmith and ended poorly when he had to leave the game with an ankle injury.  Cleveland made some big runs to his side but not due to his play. He was doing his role on the edge but there were big gaps inside of him. He did make two tackles. The first came on a short pass to the left that he hustled over and attempted to punch out the ball. The second came when he was able to violently shed a blocker and make a quick stop inside. There was a play on touchdown run by Cleveland where he looked like he was going to drop into coverage initially but then couldn’t get off or around the block to cut off the running lane.

He only had a handful of pass rush attempts and tried cross chops, stabs and ghost rushes but is best rush came from a bull rush and if not for a quick pass he would have driven the tackle back to the quarterback.  He also had one drop into Zone coverage but the pass did not come his way.

On this play the tight end will motion to the right. Highsmith (56) drops his right foot looking like he is going to drop into coverage but it’s a run play. He is unable to get off or get outside of the block to cut off the runner.

Earlier in the game it looked like Highsmith might have been leg whipped on a play but this is his last play. I slowed it down and I don’t really see anything that would cause the injury but maybe he tweaked it something that had happened on the earlier play.

There was some speculation if he would start this playoff game but the nod went to Matt Feiler. He did enter the game on the field goal unit lining up in the right tackle spot.

Davis saw five snaps late in the fourth quarter.  The first two were from the right defensive end and both plays started to his left and both went back to his right. One was a cut back by the running back and the other a bootleg by the quarterback.  He showed solid pursuit but was not involved in either play. His other three snaps were the kneel downs at the end of the game.

In a bit of surprise Pierre saw 8 snaps on defense as the left corner back in Dime personnel.  He played mostly Off Man coverage but did play some Zone and Press as well.  He was targeted once and showed good speed and body control on a deep route and got his head around and was able to break up the pass.

On special teams he contributed two tackles. The first came on a punt in the first quarter where he beat the blocker with straight speed to the inside and made a nice tackle on the returner who had caught the ball on the run.  In the second quarter, his tackle came on kickoff coverage where he worked back to the returner and made a nice tackle to save what could have been a big return.

Here is the pass breakup by Pierre (42). He’s at the bottom of the screen flips his hip to run with the receiver and importantly gets his head around to find the ball and break up the pass.