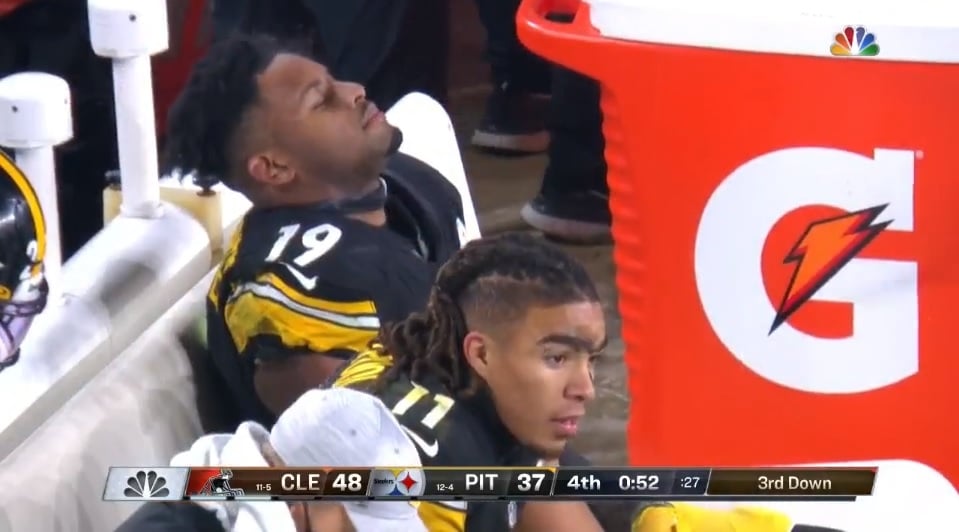 At this point, I’ve run out of words to describe December collapses and playoff embarrassments at Heinz Field with this franchise.

Sunday night in prime time was more of the same, a nearly carbon copy repeat of the last time the Steelers were in the playoffs, a 45-42 defeat to the Jacksonville Jaguars in 2017.

The 48-37 loss to the Cleveland Browns at home on Sunday night was a disaster from the get-go with a high snap from Maurkice Pouncey that resulted in a Browns’ touchdown, four interceptions on the night from Ben Roethlisberger, and a lackluster defensive performance that came from a non-existent pass rush or run defense, missed tackles galore, and — somehow — linebackers on slot receivers AGAIN!

Let’s get to grades.

Sure, Roethlisberger threw for 501 yards and four touchdowns, but before anyone could blink it was 28-0 thanks to two Roethlisberger interceptions and some dreadful misses.

It had a strong déjà vu feel of the Colts’ game in Week 16, but this time the Steelers couldn’t get stops defensively.

It’s magical when the offense opens things up and goes up-tempo and takes shots down the middle of the field.

Roethlisberger eventually carved up a soft Browns’ secondary, but it was too little, too late. The interceptions early were killer. The one to Takitaki late might have been the worst one.

If that’s it for Ol’ 7, thanks for the ride all these years. A true legend and a first ballot Hall of Fame quarterback. We’ll see what the off-season brings.

I was impressed with the way the Steelers started the game on the ground. James Conner looked really good and was chewing up yards.

But as the Steelers fell behind, they moved away from the run game – and rightfully so.

That said, if that’s the last time Conner is in a Steelers uniform, he looked good throughout the game. While the rushing numbers might not show it (37 yards and a score on 11 carries), he consistently moved the chains and had successful runs left and right.

Benny Snell Jr. looked good in limited action too, rushing for 13 yards on two totes. Even Derek Watt moved the chains once on a surprise carry. The second carry though made no sense as the Browns knew it was coming on third and short, forcing a punt.

As a receiver, Conner was strong once again, finishing with five catches for 30 yards, adding a 2-point conversion late in which he made a defender miss at the line before driving into the end zone. Snell added one catch for 4 yards.

The numbers look awesome, and guys really stepped up. All of it was with the Steelers down big.

It looks great on paper that JuJu Smith-Schuster and Diontae Johnson combined for 24 catches for 274 yards and a score, but it just doesn’t matter in the end.

Smith-Schuster was a monster over the middle of the field and really backed up his talk leading up to the game, but those numbers are meaningless at this point.

Johnson had a ball bounce off of his hands for a pick early in the game but bounced back to put up good numbers. Again, meaningless.

Chase Claypool added five catches for 59 yards and two scores and helped make a game of it on the scoreboard.

James Washington got in on the action too adding five catches for 72 yards. This was all done in trail mode though against a poor secondary. Would have been nice to have those numbers in a win.

I counted two drops for Eric Ebron and one drop for Vance McDonald.

Add in my disdain for Ebron celebrating into the camera down 28-7, and well…yeah.

Ebron hauled in seven passes for 62 yards and a score in likely his final game as a Steeler. He stretched the middle of the field fine.

McDonald had some impact in the run game, helping open some holes, but the drop in the end zone was tough to see.

When you have a quarterback attempt 68 passes in a shootout, one would expect some sacks and quarterback hits allowed, no?

But what we can’t look past is the bad snap on the first play of the game by Maurkice Pouncey that resulted in a Browns touchdown 14 seconds into the game. He had snapping issues all night and looks just about washed.

I thought the rest of the offensive line overall was fine. Matt Feiler had a rough holding call early in the game that put the Steelers behind the chains, which ultimately ended in a Roethlisberger interception.

The OL looked good on the ground early, but once they fell behind they had to abandon the run.

With the Browns down a key lineman, and then losing multiple guys in the game, Cam Heyward, Stephon Tuitt, and Tyson Alualu were non-existent. That’s tough to see from big money players in obvious mismatches.

Put it to you this way: Maurkice Pouncey made more tackles than Cam Heyward on Sunday night.

Tuitt and Alualu combined for 10 tackles, but they didn’t play much of a factor against the run, or rushing the passer. Same for Heyward; a game to completely forget.

TJ Watt is the likely Defensive Player of the Year, but the Browns did a great job neutralizing him, running the ball away from him and getting the ball out quickly in 2.5 seconds or less.

Watt had just one tackle for loss on Sunday night.

Once Alex Highsmith left the game with injury it was down to Cassius Marsh and Ola Adeniyi. Not great! Marsh was terrible against the run and was not a factor at all rushing the passer.

Adeniyi broke up a pass late in the game on a good rep, but wasn’t a factor either.

Inside, Robert Spillane returned from injury and was dreadful. Sure, he led the team with nine tackles, but he was a liability against the run and was asked to cover Jarvis Landry often in the slot. You know how that went.

Vince Williams was poor against the run as well, and came off the field in obvious passing situations for Avery Williamson, who didn’t make a single play on the night.

Terrell Edmunds might have just gotten his fifth-year option declined with his dreadful play on Sunday night. Edmunds missed a tackle on Landry’s catch-and-run touchdown, missed a key tackle in space on Nick Chubb, and was a liability all over the field.

Edmunds even had a chance for a big shot on Mayfield near the sticks in the first half and came up soft to nudge him out of bounds. So disappointing.

I thought Cam Sutton and James Pierre played well in place of Joe Haden, who sat out due to COVID-19 regulations, but on the other side Steven Nelson had the chance to make some plays and simply couldn’t. At one point in the first half, Pierre was the lone defensive player to make a play. An undrafted rookie free agent in a playoff game with all that talent!

Mike Hilton, likely in his last game as a Steeler, was bad in coverage early, getting cooked by Landry, and later left the game with an injury.

I thought Minkah Fitzpatrick was fine overall. He supported the run well, tackled in space and did his job. But the miscommunication with Sutton on the Austin Hooper touchdown was tough to see. The same mistakes popping up over and over and over again. Mayfield carved up the Steelers, which was so disheartening knowing how shorthanded the Browns were offensively.

Ray-Ray McCloud was pretty darn effective on kick returns Sunday night, but penalties put the Steelers in poor field position a lot. McCloud looked solid on punt returns too, not that it really mattered much.

Chris Boswell was perfect when called upon Sunday night. Not much more to say there.

I was pretty disappointed in Jordan Berry overall. He punted on some short fields and failed to pin the Browns deep. He has to be better there.

The play calling early on offense was so darn frustrating, none more than the second third and one fullback dive to Derek Watt that the Browns snuffed out with ease.

Defensively, Keith Butler ran into the same issues that have plagued him since 2018: empty formations when the Steelers are in base. Spillane on Landry gave me PTSD to Keenan Allen carving up Jon Bostic a few years ago. Just like TJ Watt covering CeeDee Lamb earlier in the year did.

As for Mike Tomlin, for a guy who doesn’t “live in his fears” he sure did Sunday night. He punted from the Browns’ side of the field on fourth and short twice and both ended up in Cleveland touchdowns on the ensuing drive.

He needs to make some serious coordinator and position coaching changes, and he needs to start being more aggressive and innovative.

I refuse to blame him for the five offensive turnovers – four in the first half – that put the Steelers behind the 8 ball. But I think the defense coming out flat potentially speaks to him not having the guys juiced up for the start of the game. That’s disappointing.