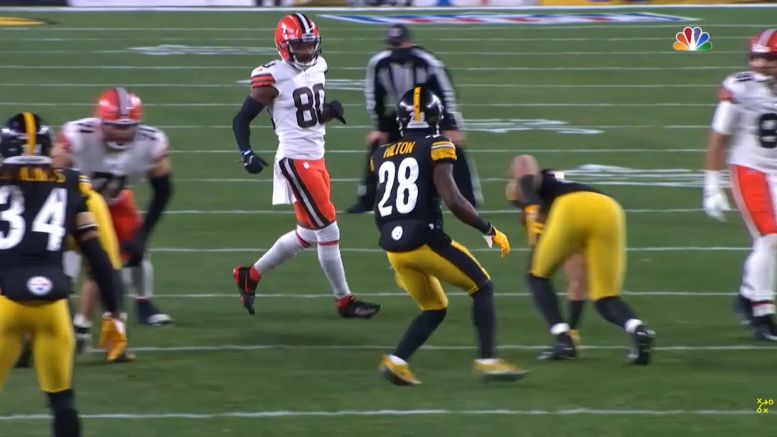 Topic Statement: The defense was the bigger problem for the Steelers last night compared to the offense.

Explanation: The Steelers’ offense ultimately put up 37 points on the board, but only after trailing by 28 and spotting the Cleveland Browns seven points on the first play. Ben Roethlisberger (and Maurkice Pouncey) turned the ball over five times, giving Cleveland several short fields, but the defense didn’t get any pressure or takeaways and couldn’t keep the Browns out of the end zone.

Everyone understood entering this season that it would be up to the defense to carry the load. They failed that last night. There would be times they would have to pick up the offense’s slack, and they didn’t. They allowed the Browns to score touchdowns on each of their first three drives, and then four more times throughout the game, including two more touchdowns.

Even when considering the offensive turnovers, it’s incumbent upon the defense to hold them to a field goal. They allowed four scoring drives of at least 59 yards over the course of the game instead. You can’t climb out of a deep hole when your partner is still digging underneath you.

There is no escaping the five turnovers. Four interceptions and a fumble that directly led to a defensive touchdown. Four drives that started inside of Steelers territory. You can’t put that kind of pressure on your defense.

It’s easy to try to let them off the hook because they still ended up putting 37 points on the board, but that was against a defense that was playing with an insurmountable lead, when the reality is that they never even game within a one-score game.

Everything that was wrong with the offense at any point of the season, seemingly, was wrong on this day, whether it was dropped passes or miscommunication or an inability to pick up short-yardage conversions, and on and on. Both sides of the ball own a ton of the blame, but if the scale tips slightly in one direction, it’s the one that turned the ball over five times and led to a 28-point deficit.