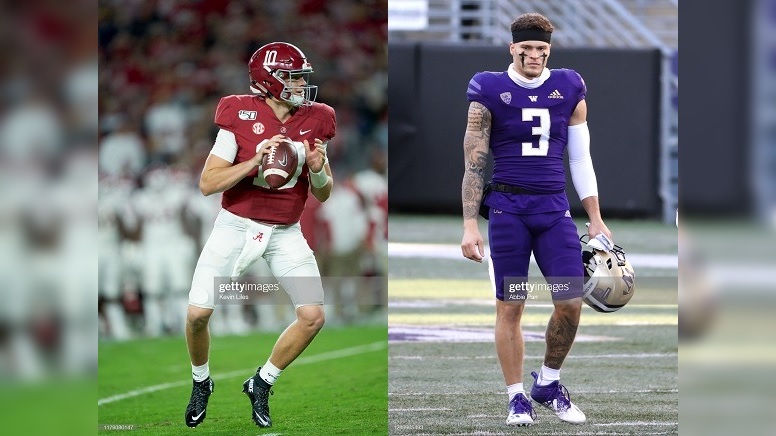 While the end of the 2020 NFL season is still several weeks away, the 2021 mock draft season is well underway. Several initial major media draftnik mock drafts are slowly trickling out and on Tuesday, Dane Brugler of The Athletic released another offering with this one encompassing the first two rounds. To cut right to the chase, Brugler has the Pittsburgh Steelers selecting Alabama quarterback Mac Jones in the first round at 24th overall and Washington cornerback Elijah Molden in the second round at 55th overall.

Below is what Brugler wrote about regarding the Steelers possibly selecting Jones in the first round:

Ben Roethlisberger’s future in Pittsburgh is uncertain and the Steelers already know his successor isn’t on the roster. Jones is a tough prospect to evaluate because of the perfect situation around him at Alabama, but he deserves credit for his poise in the pocket and consistent decision-making.

That’s not much from Brugler on Jones, who led Alabama to another National Championship Monday night against Ohio State. Jones completed 36 of his 45 total pass attempts against Ohio State Monday night for 464 yards and five touchdowns. He also did not throw an interception in that game. For the season, Jones, who was a junior in 2020, completed 311 of his 402 total pass attempts for 4,500 yards with 41 touchdowns and just four interceptions. He has yet to announce if he’ll declare for the 2021 NFL Draft.

Would the Steelers seriously consider drafting a quarterback this year in the first or second round? That’s certainly plausible as we sit here today and especially with the immediate future of longtime starting quarterback Ben Roethlisberger currently up the air. Currently, both Roethlisberger and his backup Mason Rudolph are under contract through the 2021 season. In short, a quarterback drafted in the early rounds this year would be primed to become the team’s new franchise signal caller in 2022 at the latest.

I’ve yet to take a deep dive into Jones’ tape and probably won’t be able to for at least another week. We will, however, have a full scouting report of Jones on the site in the coming weeks, assuming he soon declares that he will forgo his senior season, and obviously way before the 2021 NFL Draft takes place.

Jones, by the way, is the fifth of five quarterbacks that Brugler has mocked in the first round of his latest offering.

As for Brugler mocking Molden to the Steelers in the second round, he offered up no reason for that in his post. Molden is, however, seemingly regarded by many draftniks as one of the top five cornerbacks in the 2021 draft class. He seems ideal to play in the slot at the NFL level and Washington has him listed on their website at 5’10”, 190-pounds.

‘Like Jones, we will have a scouting profile of Molden on the site in the coming weeks. The Steelers might very well be in the market to draft a cornerback or two in this year’s draft and especially if they lose Mike Hilton and/or Cameron Sutton in free agency during the early portion of the offseason.