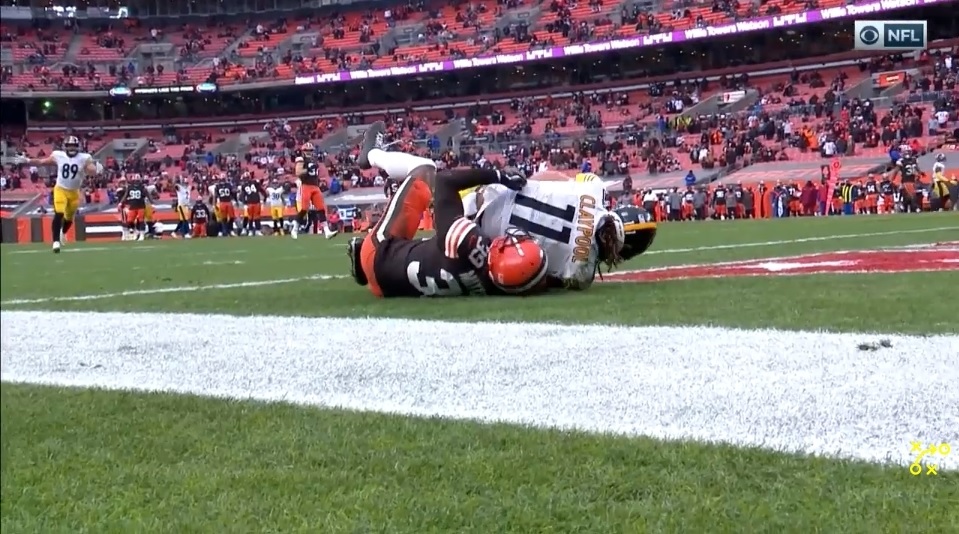 Dallas has one receiver to the left and three to the right with a running back to the right of the quarterback who is in shotgun.  The Browns had five defensive backs on the field and look to be dropping into a Cover 3 look.

Michael Gallup (13) is split wide to the left and he is going to run a fade route while being covered by Terrance Mitchell (39). To the right they have CeeDee Lamb (88) in the tight slot, Amari Cooper (19) and Dalton Shultz (86) wide to the right.

The Browns keep Denzel Ward (21) outside and he will follow Shultz on his quick in route. The Browns will blitz nickel corner M.J. Stewart (36) from the slot and B.J. Goodson up the middle. Sione Takitaki (44) will cross the defensive formation to fill the area left by the blitzing defenders.

This leaves safety Andrew Sendejo (23) to attempt to split the difference between the Seam route from Lamb and the Out route from Cooper. Both receivers end up open and quarterback Dak Prescott (4) will look left to hold the safety to that side before choosing Lamb for an easy 43 yard touchdown.

Steelers Scenario – The Browns only blitz about 20% of the time but that may increase with the loss of Olivier Vernon. Put Chase Claypool to the left. He will draw the attention of the corner and safety to that side. Eric Ebron will be split wide with JuJu Smith-Schuster in the slot. Put James Washington in the tight slot where he is likely to draw the least attention.

The Jaguars had two tight ends on each wing and a receiver in the tight slot to each side with a running back behind the quarterback who is under center.  The Browns are in their base defense with three linebackers and four defensive backs on the field.

To the left Jacksonville has Keelan Cole, Sr. (84) and tight end Eric Saubert (85). To the right they have tight end Ben Ellefson (86) and wide receiver Collin Johnson.  This formation and personnel grouping would lean toward a running play.

Quarterback Mike Glennon (2) will take the snap and open to his right to hand it off to James Robinson (30) with the offensive line along with Saubert sliding to the right to block.  Ellefson will come across the formation to become a blocker. It is actually a fake hand off and it sucks up the three linebackers.

The alignment of the receivers brings the corners in closer to the middle of the field.  Cole will angle his route inside to the near hash before breaking out to the corner taking defensive back Kevin Johnson (28) and safety Sendejo with him. Johnson will run a deep over route to get behind the linebackers and run to the area vacated by Johnson. Mitchell will try to keep pace and safety  Karl Joseph (42) who was in the box will try to get back but Johnson is too far ahead leading to a catch and run for a 46 yard touchdown.

Steelers Scenario – Out of twelve personnel the Steeler throw it (53%) slightly more often than running it (47%).  The majority of time they use Smith-Schuster and Johnson as the receivers in 12 personnel. Use Johnson on the Corner route and Smith-Schuster on the over route and have Ebron and a running back as your check downs.

Tennessee ran basically the same play (play two above) as Jacksonville right before this play.  The Titans start with two tight ends to the left and two receivers to the right with one in the slot and one outside. The running back is to the left of the quarterback who is in shotgun. The Browns are in their base defense and are going to play Man coverage.

Quarterback Ryan Tannehill will look right from the get go but the play is designed to go back to the left. Tight end MyCole Pruitt (85) is lined up inline and has linebacker Mack Wilson (51) in his face in choke coverage.  The tackle David Quessenberry (72) will fire out into Wilson and Pruitt will release inside of the left tackle. Pruitt will release up the seam uncovered and take a pass from Tannehill into the end zone for a 22 yard touchdown.

Steelers Scenario – This is a nice play design.  The Steelers could run Smith-Schuster on the Out route and Johnson on the In route. Ebron runs the Post to the middle and you sneak out Vance McDonald up the seam.