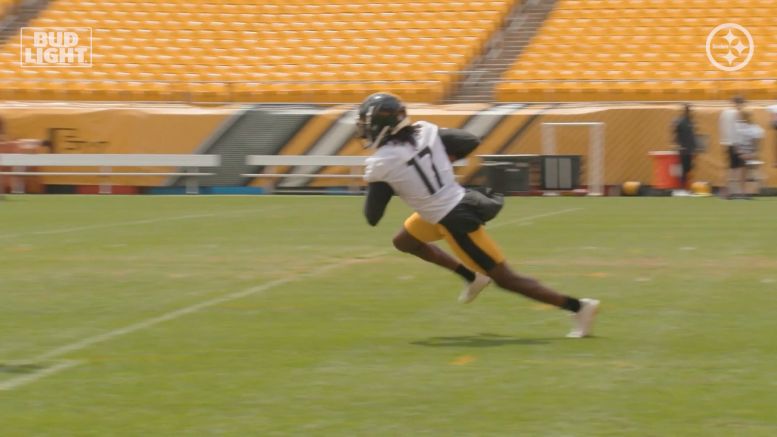 Reasoning: Despite the fact that he spent time on the 53-man roster in 2019 and remained on the practice squad all of 2020—even elevated for action in a game—the Steelers have not, as of yet, reached an agreement with Deon Cain on a Reserve/Future contract.

Like yesterday, I have to warn that this can very well be a temporary situation, but at least for the time being, Deon Cain is not a member of the Pittsburgh Steelers organization, and we currently do not know the reason why.

A veteran receiver with some playing experience who has size and speed, Cain did not make the 53-man roster in 2020 when many expected him to, having chosen to only carry five at the position, but he did remain on the practice squad all year.

Earlier this week, the Steelers retained nearly all of their practice squad players on Reserve/Future contracts, but Cain was not among them. It could be that they decided to move on. It could be that Cain decided that he doesn’t want to tie himself up yet and make himself available for other opportunities.

As we saw yesterday, they are not done making signings. They added two more players to the Reserve/Future contract list, including running back Trey Edmunds, whom they previously had just waived from the Reserve/Injured List, so it remains very possible that we haven’t seen Cain’s name for the last time.

Originally signed off the Indianapolis Colts’ practice squad in 2019, he played in six games at the end of that season. He caught five passes for 72 yards, and he also drew multiple defensive penalties, as it was looking like he might have a future.

A former sixth-round pick out of Clemson, Cain spent his rookie year on injured reserve before playing in three games for the Colts in 2019. He would later be demoted to the practice squad, where he became available to Pittsburgh. He is currently available to anybody.