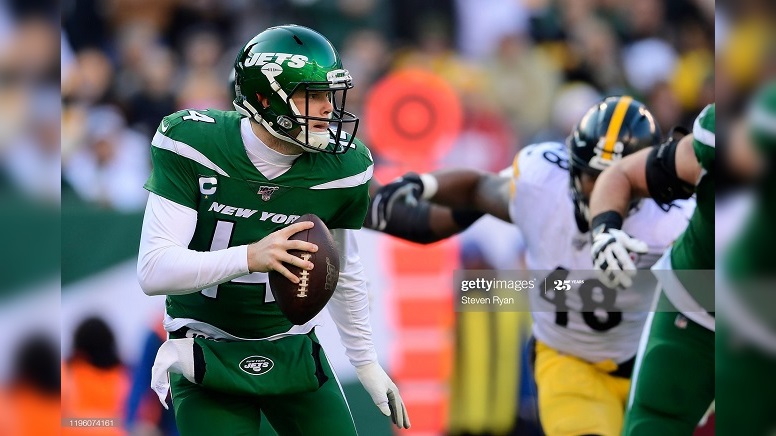 What does the future hold for Pittsburgh Steelers quarterback Ben Roethlisberger past the 2020 season? Will he retire? Will he have his contract that expires after the 2021 season extended? We’ll get a better idea come March as that is when Roethlisberger is due a $15 million roster bonus. Until then, however, speculation seems to be heavy that the Steelers might acquire another young quarterback to succeed Roethlisberger either via the draft or an offseason trade. Not surprisingly, several people are attempting to connect the Steelers dots to current New York Jets quarterback Sam Darnold as a potential offseason trade acquisition. In fact, one unnamed NFC exec has now gone on record as suggesting that Darnold to the Steelers via an offseason trade should be explored.

“Darnold needs to be repaired and that would help a team buy low,” the unnamed exec said, according to recent article on espn.com. “It probably wouldn’t cost a team much draft capital, and he could use a year behind the scenes with an established organization, but there’s still talent there. A lot of people are high on his skill set. That’s [a setup] that would keep Roethlisberger and the Steelers together without the long-term commitment.”

While that all sounds good in theory, and by the way, I had Darnold as my top-rated quarterback in his draft class in 2018, it’s just so unlikely that he’ll land with the Steelers during the offseason barring the team cutting ties with Roethlisberger in some form or fashion come March. I listed several legitimate reasons months ago as to why Darnold jetting to the Steelers after the 2020 isn’t likely to happen.

To refresh everyone’s memory, the Steelers aren’t going to be in great shape salary-cap wise come March if Roethlisberger is retained. Additionally, trading for Darnold means they would acquire not only the final year of his rookie contract, but the rights to decide to pick up his fifth-year option for the 2022 season this coming offseason, which should be around $25 million and, per the new CBA, fully guaranteed. In short, and assuming Roethlisberger is retained in 2021, Darnold will have cap charge of $4,774,685 and as a backup to boot. Even if he doesn’t play a down in 2021, the Steelers would be on the hook for his $25 million salary and perhaps with him not already playing very many snaps for them in 2020.

The above scenario is just not how the Steelers do business. They just can’t afford to have Roethlisberger and Darnold on the roster at the same time. If they want Darnold badly enough and truly believe him to be the longtime heir apparent to Roethlisberger, they’ll need to cut ties with Big Ben before his roster bonus is due in March, and currently there are no signs of them doing that. There are also no signs that Roethlisberger will be willing to retire.

On top of everything else, the Jets are going to push hard to get great compensation for Darnold via a trade and that’s even if they plan to draft another top-rated quarterback in 2021. Will the Steelers really want to give up a first or second round draft pick that might need to be cut after the 2021 season? I kind of doubt it. The Jets would be silly to accept anything less than a second-round draft pick for Darnold. on top of that, there will likely be a few teams willing to give the Jets a first or second round draft pick for Darnold in hopes of getting a winning golden lottery ticket that just needs to be shined up and put in a fresh scenery.

Once again, I think Darnold might still have some better years ahead of him in the NFL as a starting quarterback. That said, however, for me to push the idea that the Steelers have a legitimate chance of landing him just because some unnamed NFL exec thinks that’s a great landing spot for him would be me doing the readers a huge disservice. I just can’t push scenarios that will get the fan base excited if I dint really believe they will ultimately happen.

Now, if Roethlisberger retires or the team cuts him by March, come talk to me then about the possibility of Darnold possibly landing in Pittsburgh at that point.

Should the Steelers ultimately have a new young quarterback on their roster come the start of the 2021 OTAs, that quarterback will likely be one that was drafted or one that has some NFL experience that signed a one-year deal for about the NFL minimum.