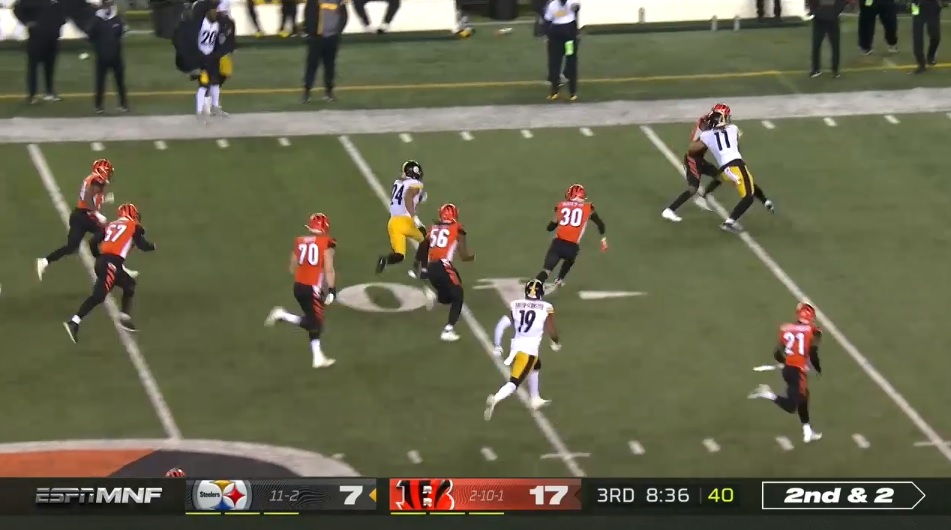 About the only positive Mike Tomlin could take from Monday night’s upset loss to the Cincinnati Bengals was the play of Benny Snell. Snell breathed life into the Steelers’ run game for the first time in months, carrying the ball 18 times for 84 yards and a touchdown. He’s the first Steelers’ back to run for 80+ yards in a game in almost exactly one month, the last being James Conner on November 22nd.

Though Mike Tomlin seemed optimistic Conner would return after missing last night due to a quad injury, he made it clear Snell won’t revert to his clear-backup role.

“You gotta admit that Benny was an awesome element of play for us in the last game when we didn’t have a lot of awesome elements of play,” Tomlin told the media during his Tuesday press conference. “His efforts were appreciated. So I’m sure he’ll have an opportunity to be impactful in this one regardless of James’ availability.”

Snell’s downhill nature pairs well for a run scheme that hasn’t found much success this season. Rarely will Snell break off the big play, though he had an impressive 29 yard carry against the Bengals, but he’s largely able to avoid negative runs and pushes the pile forward to keep the offense on schedule. Though the difference isn’t huge, they’re both running behind a line struggling to run block, Snell has a lower negative run percentage on the season.

The same is reflected in their numbers over the past two seasons. Here’s their negative run numbers in 2019.

“I was impressed with the efforts of Benny Snell and what we’re able to do in that area of play.”

While Snell played well against the Bengals, the Colts will be a much tougher task. Cincinnati came into the game with a bottom third run defense. Not Indy. They rank in the top five in yards per carry allowed (3.8) and yards per game given up (98.1). The Steelers will have to prove their one-week resurgence is a product of them getting their own house in order. Not just a reflection of their opponent.

Tomlin has always been a fan of Snell and his brand of Benny Snell Football™. With Conner almost certainly playing his final two regular season games as a Steeler, giving Snell a longer look is a preview of what’s to come in 2021. At this point, Pittsburgh’s best offseason strategy is to let Conner sign elsewhere, draft a playmaking/receiving back on Day 2 of the draft and have a three-headed attack of Snell, Anthony McFarland, and that rookie for next season. That will probably end the Steelers’ feature back days, using much more of a specialized committee, but that’s the way the league’s been trending for years.