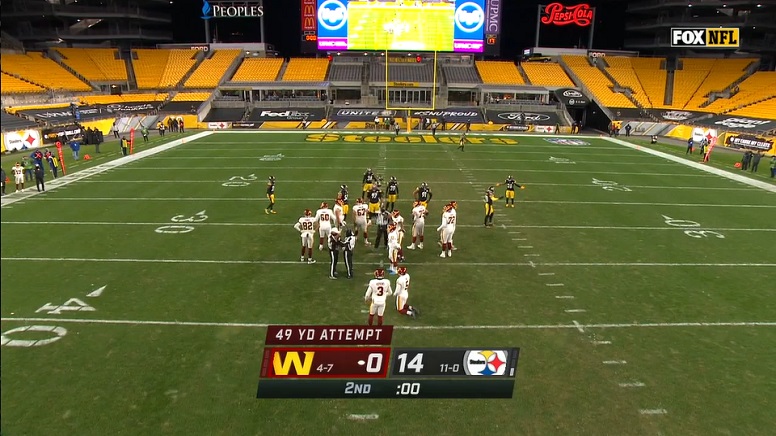 The Pittsburgh Steelers lost to the Washington Football Team by six points Monday night and there’s a long list of reasons why they did. Way down that list of reasons was Washington kicking a field goal, their first points of the game, right before halftime, but only after the game clock had been stopped following quarterback Alex Smith being sacked on third down with 18 seconds left and his team out of time outs.

That unprecedented clock stoppage to ensure a kicking ball was inserted into the game after Smith ran off the field with the one he was sacked with allowed Washington an opportunity to attempt a 49-yard-firld goal with 5 seconds left in the first half. On Tuesday, Tomlin was asked during his weekly press conference if he had been given any sort of explanation for that clock stoppage late in the first half so that a kicking ball could be inserted into the game.

“I didn’t need any explanation,” Tomlin said. “I knew they were wrong. I was trying to help them get it right. I’m not looking for explanations.”

Not long after that chain of events transpired in the Monday night game and Washington had their 49-yard field goal, retired NFL referee Terry McAulay, who now serves as the on-air rules analyst for Sunday Night Football on NBC, took to Twitter to basically explain how the Steelers got screwed right before halftime. You can see his tweeted explanations below.

My take on the #WASvsPIT end of half: Teams know that in a last second FG situation, officials will use the ball from the previous play. When Smith took the ball off the field, any delay in getting another ball in is on WAS.

This is no different than a normal 2-minute drill when the same ball is used and players get the ball to the nearest official to help get the ball spotted. If they force officials to get a new one, the time it takes to do that is on them.

So, there you go, the first half clock should have been allowed to continue to run while an effort was made to get any ball on the field and placed properly for the start of play so that Washington could attempt a last-second field goal. Had that been what transpired, Washington would have never gotten the attempt off in time thanks to Smith carrying the football off the field with him after the sack.

Did the Steelers ultimately lose the Monday night game because of what transpired at the end of the first half? No, because they had a full second half to overcome that referee blunder. Even so, giving Washington three-points that they didn’t earn did impact the game to some degree just the same. They didn’t deserve those three-points and the Steelers should have gone in at halftime leading 14-0, instead of 14-3.