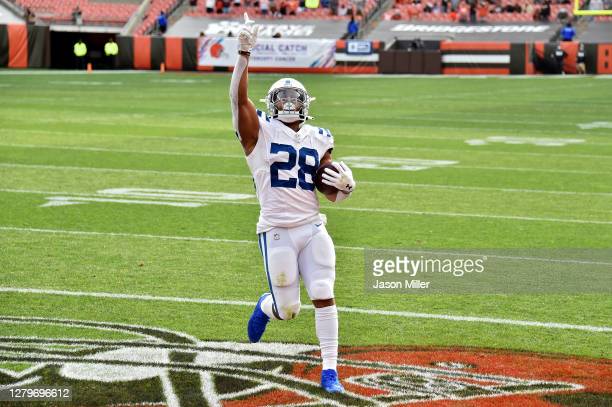 First, Tomlin was asked about the rookie Taylor.

“He’s got a good skillset,” Tomlin said. “We looked at him coming out in the draft. He’s good on the interior. He’s good on the perimeter. He has good speed when breaks in the open spaces. He’s a tough tackle. He’s just a really talented guy and they’re doing a good job of opening holes.”

Taylor has been the Colts’ leading rusher with 842 yards, a healthy 4.6 YPC, with seven rushing touchdowns. Of rookies, only Jacksonville’s James Robinson has more rushing yards and only Washington’s Antonio Gibson has more touchdowns. Taylor’s seven scores are tied with Robinson and Detroit’s D’Andre Swift. Taylor’s playing some of his best ball lately, running for 80+ yards in four straight games. Two weeks ago, he put up 150 yards on the Las Vegas Raiders.

As Tomlin mentioned, the team showed pre-draft interest in Taylor, holding a virtual meeting with him before this year’s draft. They ultimately never had the chance of drafting him. Taylor went 41st overall, eight picks ahead of Pittsburgh’s 49th slot, where they selected WR Chase Claypool. The Steelers ended up drafting RB Anthony McFarland in the fourth round.

Taylor’s backup is an excellent complement. Nyheim Hines functions as the team’s third down/receiving back. Tomlin’s been impressed by his game, too.

“He’s always been a really dangerous tandem runner. I’m very familiar with him. He was a running mate and running partner of Jaylen Samuels at NC State when they came out a couple of years ago. So I looked at a lot of his tape and he’s doing similar things in that offense, working in tandem that you saw on the NC State tape.”

Hines was drafted one round ahead of Samuels in the 2018 draft, taken by the Colts in the fourth round. His 53 receptions this season leads the Colts, making him just one of two running backs (the Saints’ Alvin Kamara the other) to lead his team in receptions. Hines has seven total touchdowns on the season. Three rushing, four receiving. He’ll be a challenge for a Steelers’ team still feeling the loss of Devin Bush, though they will return Vince Williams. Williams missed the last two games while on the Reserve/COVID list.