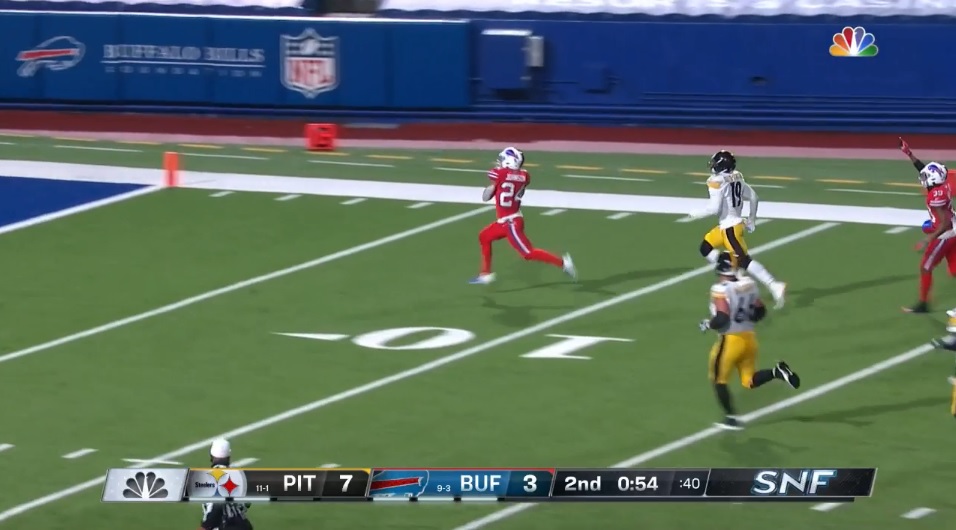 The Pittsburgh Steelers had the lead. And the ball.

In one play, both those things were no longer true.

Ben Roethlisberger’s pick six at the end of the first half gave the Buffalo Bills a lead they wouldn’t give back. Roethlisberger’s pass intended for JuJu Smith-Schuster was thrown behind and intercepted by Taron Johnson, who raced the other way into the end zone.

After the game, Mike Tomlin discussed how critical of a play it was.

“There’s no question,” he told reporters in his postgame press conference. “We made a few plays in the first half defensively. They made a few plays. Their plays were more significant than ours. That pick-six was the significant play. And so, you have to give them credit.”

Johnson clearly anticipated a quick-breaking route out of the Steelers’ bunch set. Roethlisberger’s poor placement only made matters worse and led to the Bills’ touchdown.

That gave Buffalo a 9-7 lead. Instead of the Steelers trying to restart the offense late in the half, they sat on the ball going into halftime. Buffalo got the ball to begin the third quarter and put together an eight play, 68 yard drive to go up 16-7. From that point on, the game felt pretty much over.

Roethlisberger analyzed the error after the game.

“I saw them go into a kind of a zone coverage,” he told reporters after in his postgame presser. “And so I tried to keep Juju from going out to the corner to get blown up. I put it a little bit on his body behind him and the guy made a good play. And it’s just a bad throw on my part.”

As Tomlin alluded to, the Steelers’ defense made plays of their own in the first half. But Johnson’s pick six was a major swing. Instead of Pittsburgh potentially going into the half up 14-3, or 10-3 should they have gotten into field goal range, they went into the half trailing.

Roethlisberger struggled on the night. Early drops didn’t help him but his ball placement wasn’t as strong and his deep ball floated far too often. Pittsburgh went just 1/10 on third down and was completely out of sync in the second half. This unit has also struggled to start fast. They have just six points in the first quarter over their last four games. That came via a defensive score, Robert Spillane’s INT versus the Ravens.