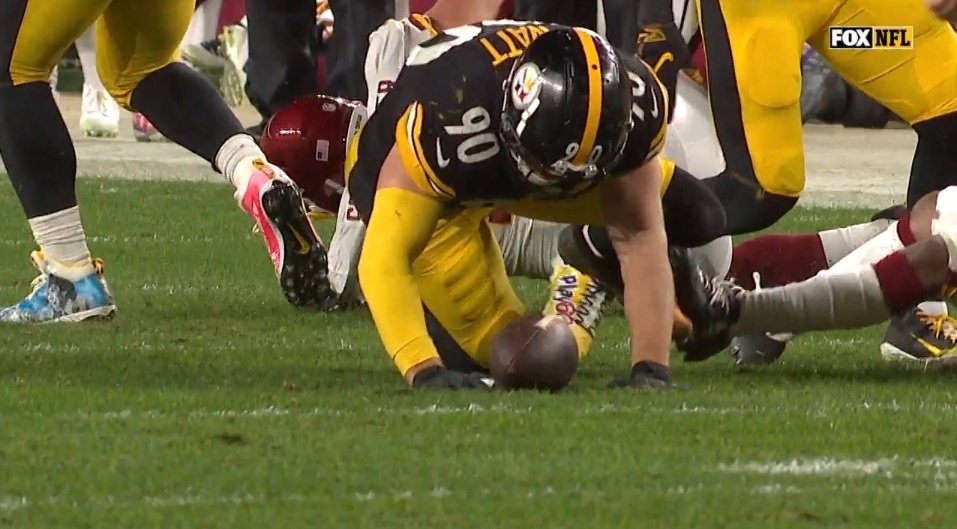 He should’ve had his first fumble recovery, too. He didn’t.

Watt ripped the ball out of Washington back JD McKissic’s hands early in the fourth quarter. He nearly picked up the ball too but instead of falling on it, he attempted to pick it up and run. Unable to get ahold of the ball, he missed the recovery, and the ball was fallen on by TE Logan Thomas.

After the game, Watt admitted he was trying to make the big play instead of simply landing on the ball.

“Yeah, trying to scoop and score,” he told reporters after the game. “Make a play for my team. Just didn’t work out, didn’t get enough hold on it. The other guy made a good play and recovered it.”

Thomas’ recovery was less about any great play he made and more about Watt trying to do too much. Here’s a look at the play.

Check out the picture in the headline. And tell me how that ball isn’t recovered by the Steelers. Funny enough, Washington had their own problems trying to capitalize on fumbles. TE Jeremy Sprinkle somehow let a chance slip through his hands after Ray-Ray McCloud fumbled a punt early in the first half.

Washington ended up punting on the drive but had Watt landed on the ball, Pittsburgh could’ve put the game away. They would’ve had the ball up 17-10 on Washington’s 36 yard line. Getting into field goal range would’ve been more difficult with Matthew Wright instead of Chris Boswell but any points there makes it a two-possession game.

Instead, Tress Way’s punt pinned the Steelers at their own 10. They went three and out, punted it right back, and Alex Smith marched his team down the field for the game-tying touchdown, benefitting from great initial field position at their own 47.

Pittsburgh finished the game without a takeaway. They should’ve had at least that one. Failing to do the thing they teach you in Pop Warner – fall on the ball – may have cost the Steelers their 12th win. Watt’s miscue here was far from the only issue and otherwise, Watt had a strong game. But it was one of the fundamental miscues that’s plagued this team for the last two weeks.