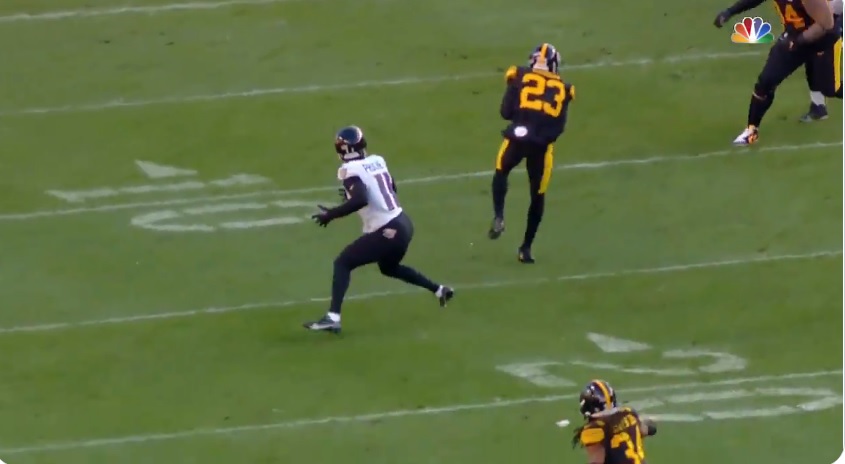 Winners and losers from the Pittsburgh Steelers 19-14 win over the Baltimore Ravens.

TJ Watt: Baltimore might want to think about blocking that #90 guy. One of his sacks came unblocked, a great scheme by Keith Butler, but Watt was a predictable problem for the Ravens all day. Baltimore was left with playing rookie Tyree Phillips at right tackle, clearly overmatched from the second he stepped into the lineup. The box score changed one of the sacks mid-game, crediting Watt with two of them on the day.

Minkah Fitzpatrick: Fitzpatrick made the play of the half, saving six points and the Steelers’ narrow halftime lead. Great job to rally and break up an end zone throw to tight end Luke Willson, knocking the ball out on the way down. Fitzpatrick has elite ball skills and he never panics when the ball’s in the air. Trusts his technique and finishes the play.

Joe Haden: Haden got the first points of the day for the Steelers, notching his second pick six of his career. Great job to trap and jump #2 running an out route and housing it the other way. Haden, as he always does, played the run tough and limited the Ravens’ meager passing attack.

Cam Heyward: Heyward overwhelmed an undermanned and out-classed Ravens’ line. Constant pressure (even if one was a terrible call for roughing the passer) and he only got better as the game went on. Finished the day with a full stat line. Two tackles, one sack, one TFL, and one QB hit.

James Washington: Solely for bailing out Ben Roethlisberger on that wild third down grab at the end of the game. Because that pass is intercepted 99% of the time. Washington always coming up with clutch plays.

3rd/4th Down, Red Zone Offense: Continued struggles here. Twice, the Steelers threw on 4th and 1. Twice, they failed. Overall, this group went 6/16 on 3rd and 4th down, struggling to sustain drives and finish with points. The Steelers came into the game with the 7th best red zone offense. They began the game 0-3, coming away with just six total points.

WR Hands: At times, it looked like the Steelers were the team who didn’t practice for over a week. Lot of Steelers beating Steelers, especially when it came to drops. JuJu Smith-Schuster, Diontae Johnson, Chase Claypool, and Eric Ebron all had at least one. A couple came on third down and in the red zone, robbing the offense of points and keeping the game close for a good chunk of the game. Johnson in particular struggled with drops and overall ball security. So much up and down with his game.

Ray-Ray McCloud: McCloud didn’t have a drop on offense. But he had one on special teams, muffing a punt he should’ve fair caught early in the game. It set up Baltimore’s first TD of the day. Just a mistake you can’t have in a game where you’re the better team. Doesn’t mean you bench him, and the team didn’t, but those are errors that can’t be repeated.

Terrell Edmunds: Will have to look at the All-22 but felt like one of Edmunds worst games of the season. Several missed tackles for a player who hasn’t missed many this season. And a terrible angle on Hollywood Brown’s 70 yard TD that gave the Ravens new life.