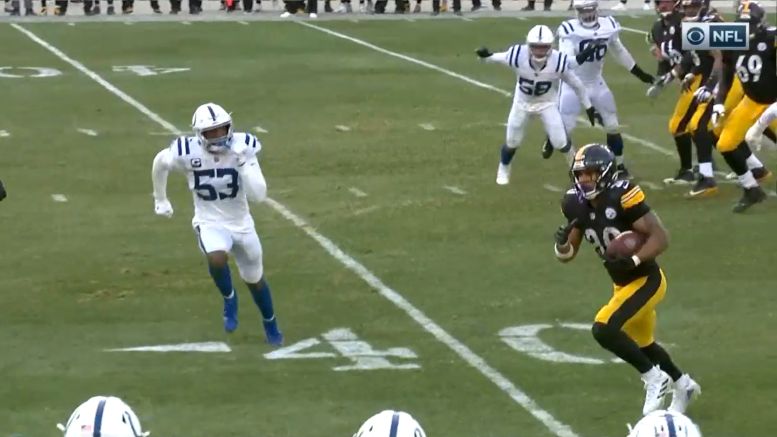 There are few things Pittsburgh Steelers fans are more fickle about than running backs and inconsistency, and unfortunately for James Conner, that has been the story of his career—but it’s more often been about inconsistency of availability rather than performance.

Even though the Steelers have had one of the very worst rushing attacks for about three quarters of the season, Conner hasn’t been the issue. Coming into today’s game, he rushed for 663 yards, but only on 155 carries, averaging 4.3 yards per rush. It was Benny Snell’s 3.5 yards per carry on 102 attempts dragging the average down.

And with the Pro Bowl back unavailable for most of the past four weeks—he missed two games due to Covid-19 and then suffered a quad injury that limited him in one game and missed the last one—things didn’t get any better.

They didn’t run the ball much, or particularly well, today against a good Indianapolis Colts team, but, again, Conner wasn’t the issue, and he still found ways to make plays. And it’s hard to run much down multiple touchdowns.

“No question, he brought an energy and an intensity and a demeanor that was contagious, but he always brings that”, head coach Mike Tomlin said of the impact on the team Conner’s return gave them. “That’s consistent with who he is. He just hadn’t been very available of late”.

He only carried the ball five times, but picked up 20 yards. More significantly, he gained 45 yards on five receptions, which are season-highs for him as the offense got away from using the running backs in the screen game.

“Having James Conner back has been a great help to us in our backfield in running the ball, doing screens with him”, said wide receiver JuJu Smith-Schuster, who came into the league together with Conner in 2017 and made the Pro Bowl with him in 2018. “He had a tremendous game, just helping to get us moving the chains”.

He also scored the Steelers’ only points of the first half, and had the only rush of the game of more than two yards. Snell totaled zero yards on six attempts, after there was talk coming into the game of him having a larger role, and many fans believing that he should get the chance to be the featured runner.

But as happens frequently, when Conner gets back from missing time and is healthy and ready to go, he shows that he shouldn’t be counted out, that he has the talent to make plays.