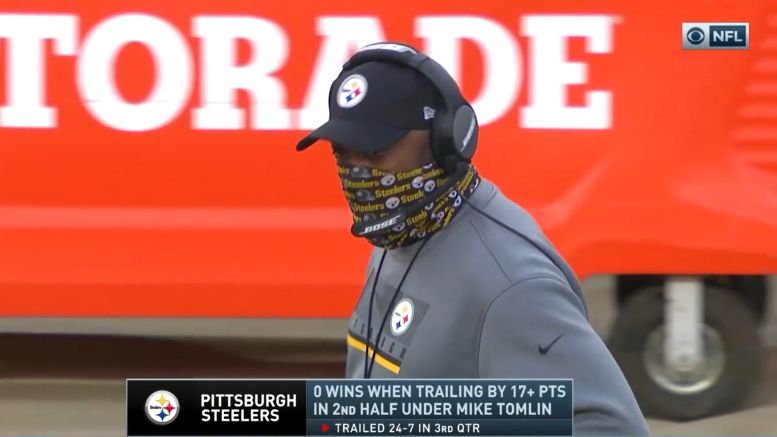 The Pittsburgh Steelers did something on Sunday in the second half against the Indianapolis Colts that they have never done before in the Ben Roethlisberger era. They overcame a deficit of 17 or more points in the second half of a game. A Roethlisberger-led team had only overcome a 17-point deficit twice before, most recently against the Cincinnati Bengals a few years ago, but that deficit was shortened by the end of the first half.

The Colts quickly marched down the field and scored a touchdown on their opening drive, with rookie running back Jonathan Taylor leading the way, and then capping off the possession with a six-yard touchdown run. The Steelers were able to match back after a T.J. Watt strip sack gave them the ball in a goal-to-go situation, James Conner eventually finding the end zone from one yard out.

Then Indianapolis would score 17 unanswered points, with Taylor scoring again, this time from one yard out, in the middle of the second quarter. A short time later, on a short field, Philip Rivers hit Zach Pascal for a 42-yard score, beating Joe Haden on play that the defense sent the blitz.

That 21-7 score stood through halftime, but the Colts began the second half with the ball and effortlessly worked their way down the field to open the third quarter. It wasn’t until they got toward the goal line that they met resistance, and a Stephon Tuitt sack on third down that forced them to settle for a field goal began to turn the tides.

The offense would ultimately squander a golden opportunity to punch it in on their opening possession, turning the ball over on downs from the two, but the defense provided them with a short field on the ensuing possession, which led to a Ben Roethlisberger-to-Diontae Johnson 39-yard touchdown.

They would go on to score three touchdowns in 11 minutes of game time, Roethlisberger finding tight end Eric Ebron for a short score at the top of the fourth quarter, and then utilizing a wicked pump fake to freeze the safety and connect with JuJu Smith-Schuster on the 25-yard eventual game-winner halfway through the quarter.

They ultimately won the game by a 28-24 margin, the defense preserving the offense’s gradual gains, chipping away at the deficit over the course of the second half, for which both sides of the ball need to be commended.

The last time that the Steelers overcame a 17-point deficit in the second half of a game? You have to go all the way back to the postseason in 2002 against the Cleveland Browns, which is actually the last time the Browns were even in the playoffs. It was 24-7 early in the third quarter, but Pittsburgh responded with four second-half touchdowns, including three passing touchdowns from Tommy Maddox, to win the day 36-33. A three-yard Chris Fuamatu-Ma’afala score with 54 seconds to play would be the game-winner.

With their win, the Steelers have clinched the AFC North.

According to @EliasSports – today was the Steelers’ 5th win in franchise history when overcoming at least a 17-point 2nd-half deficit.

It is their 1st such win since the 2002 Wild Card vs the Browns. pic.twitter.com/2JfFQYZHhk