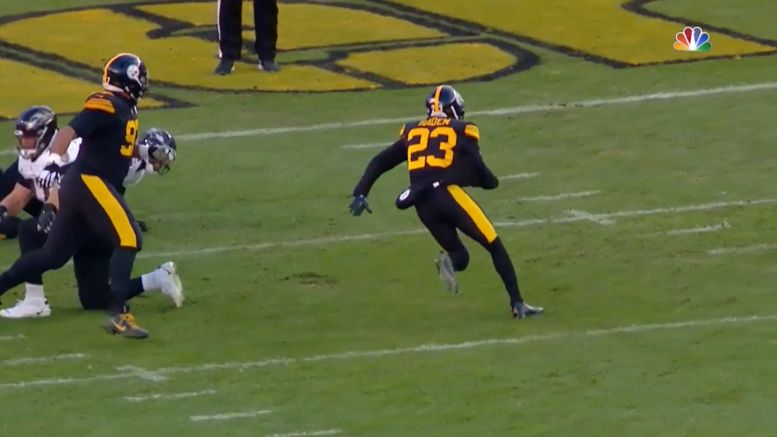 The Pittsburgh Steelers got on the board to start the game with points off of turnovers, but it took two turnovers to get it. After Robert Griffin III fumbled a read-option keeper, the offense stalled in the red zone, with Ben Roethlisberger throwing an interception. But shortly thereafter, Joe Haden would pick off Griffin and return it for a score.

It was the third defensive touchdown of the year, the third pick six, with linebacker Robert Spillane and safety Minkah Fitzpatrick claiming the other two. But on their 23rd takeaway of the season—which leads the league—they also broke a tie with the Tampa Bay Buccaneers for the most points off of turnovers in the NFL.

This is, of course, a huge part of the Steelers’ story in 2020. The turnovers are the reason why the offense ranks 10th in points per drive despite being one of the most inefficient in terms of time, plays, and yards per drive. It’s also why they own the second-best average starting field position in the league.

It’s not just defensive touchdowns here, of course. It’s gaining the ball, ideally with good field position, and carrying the momentum of the takeaway all the way into the end zone. It helps that the Steelers’ one area of efficiency on the season has been in the end zone, coming into the game ranked seventh, though this game did that number no favors.

The Steelers have scored 317 points on the season, so nearly 30 percent of their points scored in 2020 have come either directly off of turnovers or following drives that began with a turnover. Needless to say, they’re ability to take advantage of the turnovers they get has been pretty important.

Following the game, the Steelers lead the NFL both in takeaways with 23 (nobody else has more than 20) and in turnover differential at plus-12. They still rank in the top five in terms of the fewest giveaways on the season, even after having two yesterday, now with 11 on the season, averaging one per game while averaging better than two takeaways per game.