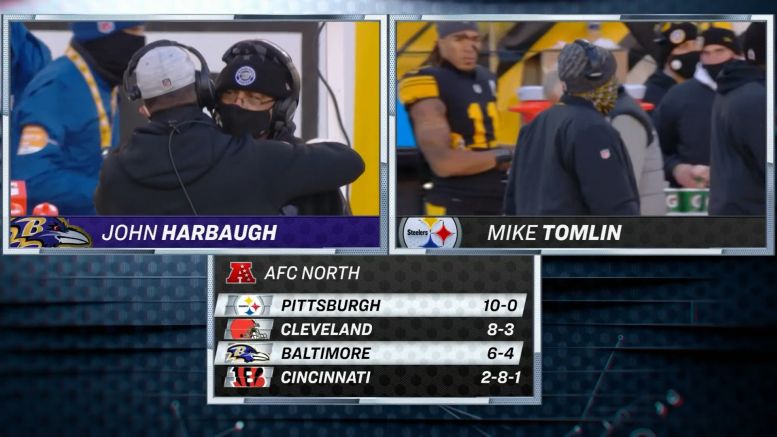 There are a lot of things that one could say about today’s game. But the majority of them can probably be summed up by a simple phrase: Wednesday afternoon football. As weird and awkward as that sounds, it reflects the weirdness and awkwardness that we saw on the field today—and in the week-long buildup, as well.

As a bonus, they even had their starting center knocked out just before the game after he was placed on the Reserve/Covid-19 List following pre-game point-of-contact testing. They were also, of course, without James Conner and Stephon Tuitt, and their absences were felt.

The first half was defined by three things: turnovers, red-zone failures, and the Ravens running the option. Robert Griffin III fumbled early on an option keeper, giving the Steelers great field position, only to see Ben Roethlisberger throw an interception on fourth and goal. Then Joe Haden would come back with a quick pick six.

The Ravens would briefly take the lead, working off of great field position after Ray-Ray McCloud was forced to muff a punt due to a great play by Baltimore. McCloud should have called for a fair catch, and it’s not clear why he didn’t, but the Ravens were able to get into the end zone off of that possession and go up 7-6.

By and large, it was really a game that reflected the circumstances under which it was played—a thrice-postponed affair for which there was a limited amount of on-field participation, and played with a number of inexperienced and new components.

Perhaps nothing illustrates that better than the simple fact that both teams players rookie or first-year centers making their first-career start. Rookie undrafted free agent Trystan Colon-Castillo played his first-ever snaps for Baltimore. J.C. Hassenauer, a first-year player who played in the AAF, got some garbage time snaps in recent weeks.

It’s fair to say that this game would not go down in the annals of history as a classic installment of the Steelers-Ravens rivalry, which has frequently been appointment viewing over the course of the past two decades. But it certainly was a product of its circumstances. We even got a Tracy McSorley 70-yard touchdown pass and a 3rd-and-1 Benny Snell conversion that was subject to booth review to end the game.