The Pittsburgh Steelers are emailing season-ticket holders regarding the possibility of having a small number of fans in attendance for their postseason run. The team sent an email out to holders outlining their playoff plans. Here’s what the team said.

“We are preparing for the possibility of hosting fans at Heinz Field for the postseason after the current State orders expire in Jan. 4, 2021,” Steelers’ spokesman Burt Lauten said in a statement. “Our goal is to use our previous stadium model and manifest from earlier this year to host approximately 7,500 people at the stadium in January.

“We appreciate those fans who have attended games this year for their support and cooperation in adhering to the policies and protocols that made Heinz Field a safe place to attend a game. We have communicated with our season ticket holders and suite holders about the potential return of fans to Heinz Field in January, and we look forward to hopefully having fans back in the stands for any potential playoff games.”

As the his statement indicates, the team hopes to have 7500 fans at Heinz Field for when the playoffs begin.

Here is one portion of the email sent out to ticket holders. 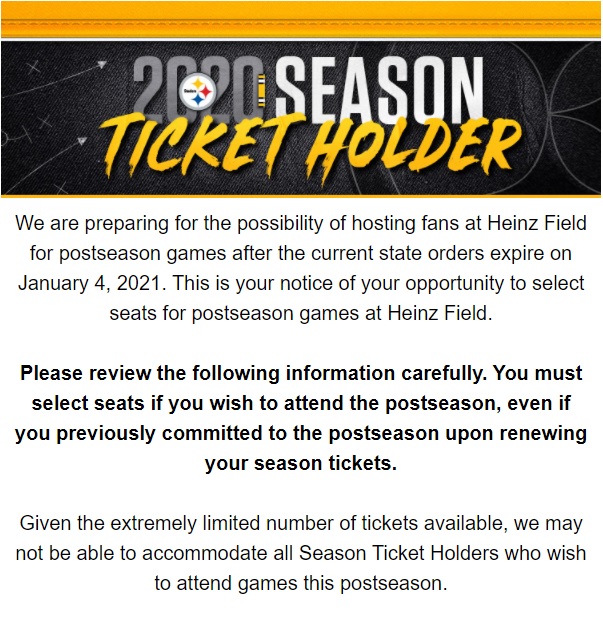 There haven’t been fans in attendance since for Steelers’ home games since Week 10. Since, new Pennsylvania COVID restrictions have greatly reduced the number of people allowed for outdoor gatherings. The team won’t have any fans at Heinz Field for their final home game on the 27th versus the Indianapolis Colts.

But the latest order runs through January 4th, one day after the regular season ends. Unless a new order is issued or the current one extended (two things entirely possible) the team could get the green light to have a small portion of the fanbase attend.

There’s also an outside possibility the NFL would go to a bubble model for the playoffs, similar to the NBA and NHL, though likely not to such a secured extent. But the league has downplayed the idea and that’s a suggestion more likely to manifest for the Super Bowl, not the entire postseason.