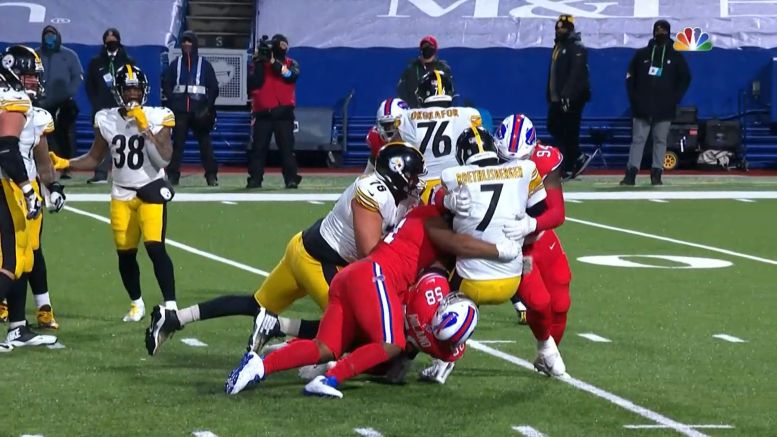 The Pittsburgh Steelers went five consecutive games without allowing a sack. It was not only the longest streak in team history, but in terms of the number of dropbacks between sacks, it was the second-longest streak in the history of the NFL—but it was nowhere close to first place. Dan Marino and the Miami Dolphins spent a streak of more than 700 pass attempts without taking a sack over a two-year span in the late 80s.

Pittsburgh has not allowed a sack in 261 consecutive pass attempts, which is the second longest streak since the 1970 NFL-AFL merger. Miami (775 pass attempts, 1988-89) is the only franchise to own a longer streak…#BertschyBits#HereWeGo #PITvsBUF

For this 2020 Steelers, there were 275 pass attempts from Roethlisberger between the last time that he took a sack and the first sack that he took on Sunday night against the Buffalo Bills, which came on 3rd and 9 in the early stages of the second half.

The last time that Roethlisberger was sacked before Sunday night’s game was on November 1 six games ago against the Baltimore Ravens. Baltimore got to him twice in that game, last taken down in the second half by Jaylon Ferguson. It was the 10th sack of the season that he had taken, and it would take a long time before he would be brought down again.

The Steelers offensive line gets a lot of criticism, and not without merit, for the lack of a run game, but they have also been one of the top teams in pass protection in the NFL. Yes, Roethlisberger gets the ball out very quickly, it’s true, but he has also worked out of a lot of clean pockets.

That one sack would prove to be the only sack Roethlisberger would take during the game, so he is still at just 11 sacks on the season, even while having now attempted 521 passes. That is a sack rate of 2.07 percent, which is by far the lowest in the league. The closest are Aaron Rodgers and Philip Rivers at 3 percent.

Considering the fact that he used to be sacked on six to 10 percent of his dropbacks routinely during the early and middle stages of his career, it really is quite remarkable. The lowest sack percentage that he ever had prior to this year on anything approximating a full season was in 2016 when he was sacked 17 times on 516 dropbacks for a rate of 3.2 percent.

Of course, avoiding sacks doesn’t do you much good if you’re still not moving the ball and putting points on the board, and the offense hasn’t been doing that much lately. They have been held to 17 points and under for three consecutive weeks now.