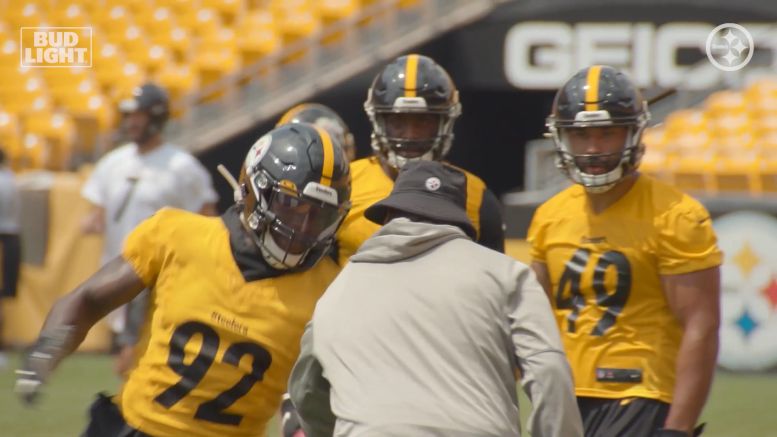 The proverbial ball is in rookie outside linebacker Alex Highsmith’s court to assume the mantle on the right edge of the Pittsburgh Steelers defense for the remainder of the 2020 season. He will be called upon to take over for veteran Bud Dupree after the latter suffered a torn ACL in the team’s last game.

The third-round rookie, who came out of a small school and had no Spring practices or preseason games, has played all of 139 defensive snaps, and hasn’t seen more than 25 snaps in any one game, but he will be asked to take on a much larger load going forward.

His teammates and coaches have expressed confidence in his ability to do just that, but also with the understanding that the job won’t be his alone. They also mentioned Olasunkanmi Adeniyi, the third-year former undrafted free agent who once had a good preseason, which has basically served as his defensive resume—though he has since made himself into a strong special teams player.

“We’ll rally around Alex Highsmith and Ola, and we expect to get positive contributions from those guys”, head coach Mike Tomlin said on his show last night. “They may not necessarily be Bud, but they can be positive contributors to our efforts, and we anticipate them playing better than we expect”.

I’m not quite sure how you can anticipate someone doing better than you expect, since you generally anticipate what you expect, but nevertheless. The reality is that Adeniyi, and perhaps Jayrone Elliott, will be a part of the solution as well, as T.J. Watt talked about.

“Bud’s such a big impact on our team. Like I said, it’s not just from a playmaker’s standpoint, but from a leadership role as well”, he said. “I feel like Alex can do a great job of that, but I also think we’re gonna have to lean on Ola to step up and have some bigtime playing for us”.

Defensive coordinator Keith Butler also mentioned both Adeniyi and Elliott in referring to the outside linebacker depth as a whole as needing to step up in order to fill the void left by Dupree, who had eight sacks prior to his injury. The other three behind him currently have one, though of course they also have under 200 defensive snaps played.

“We think Ola can step up for us”, Butler said. “All three of those guys I just mentioned have got to step up and play well for us in order for us to do what we want to do”. So far this season, Adeniyi has only played 64 snaps on defense, but that is actually more than he played all of last season. He only played nine defensive snaps as a rookie. He is also about the pass 200 snaps played on special teams this year.