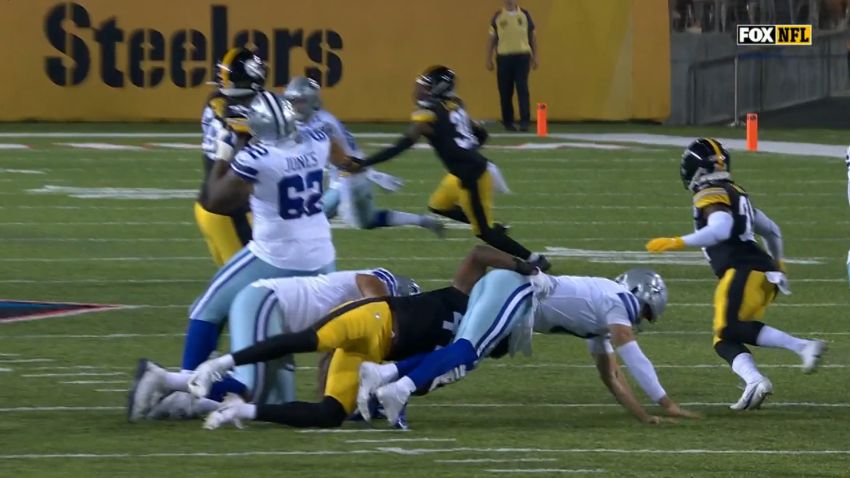 It was announced yesterday that the Los Angeles Rams had claimed outside linebacker Jamir Jones off waivers. The Pittsburgh Steelers waived him earlier this week with the presumed intention of signing him to the practice squad, after determining that Derrek Tuszka, at the time himself on the practice squad, was a better fit for the 53-man roster.

Jones now joins an oddly growing list of young Steelers pass rushers who grew a cult following in the preseason, only to accomplish little or nothing in Pittsburgh before finding his way out one way or another; he is now in the subset that includes those claimed off waivers.

For me, the real cult following in recent years began with Adrian Robinson. A Harrisburg native graduating out of Temple, he signed with the Steelers in 2012. After playing very well in the preseason, he made the 53-man roster, and dressed for 12 games, but only played on special teams. He was traded a year later for veteran running back Felix Jones; he would eventually meet a tragic end two years later.

Howard Jones was another diamond-in-the-rough prospect a couple of years later, coming out of Shepherd. He once again made an impact on special teams, but would never spend time on the 53-man roster. He did end up having success as a situational pass rusher for the Tampa Bay Buccaneers in 2015, recording five sacks that year. He last played in 2017.

Olasunkanmi Adeniyi and Tuzar Skipper are the more recent names. Both coming out of Toledo, Adeniyi was first signed as an undrafted free agent in 2018, Skipper a year later. Adeniyi has spent all of his time on the 53-man roster, but primarily played on special teams, having little impact on defense.

You may have heard some buzz around him recently, as he has recorded two and a half sacks over the course of the past two weeks for the Tennessee Titans, signing there as a free agent after the Steelers chose not to offer him a restricted free agent tender. He failed to record a sack in 200-plus defensive snaps in Pittsburgh.

As for Skipper, who recorded five sacks during the 2019 preseason, he made the initial 53-man roster, but was quickly waived and then claimed off waivers by the New York Giants. He spent a good chunk of the season there, sharing in half a sack, before being waived again, even briefly reuniting again in November, but he didn’t make the roster last year.

He then also wound up in Tennessee, but primarily on the practice squad. He only played 44 snaps last year. He has not been on a roster since the end of August and is currently available. Given that they just lost Jones, might the Steelers be interested in bringing him back a second time? They do have Taco Charlton on the practice squad as well.