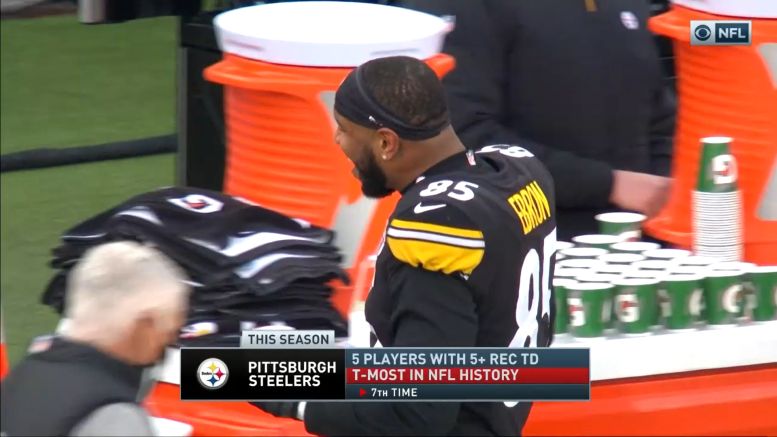 It might not seem like it, because they certainly have all kinds of shortcomings, but this has been a very interestingly productive skill position in 2020 for the Pittsburgh Steelers. In fact, they just duplicated a rather rare feat in the history of the NFL, something that has been done now just seven times.

With quarterback Ben Roethlisberger’s second-half touchdown to tight end Eric Ebron, his second of three touchdown passes on the day to give him 33 for the season, the Steelers became just the seventh team in NFL history to have five different players record at least five receiving touchdowns in the same season.

That’s actually a pretty remarkable feat when you think about it, as evidenced by the fact that it so rarely occurs. It really shows how much the ball is being spread around, and yet they still have three players this season who have scored seven or more times, so it’s not as though nobody is putting up numbers.

That year, though, Antonio Brown set a franchise record with 15 receiving touchdowns. JuJu Smith-Schuster had seven, but the third-most on the team was tight end Vance McDonald with four. Interestingly enough, next was Jaylen Samuels with three, and Jesse James had two. Each of James Conner, Ryan Switzer, James Washington, and…Alejandro Villanueva, the latter coming from Chris Boswell on a trick play, had one.

This year, nobody has hit double-digit receiving scores, but both Smith-Schuster and rookie Chase Claypool have eight, while Diontae Johnson now has seven on the season. Both Ebron and Washington has five.

But that accounts for the entirety of their receiving scoring. No running backs have gotten into the end zone on a reception this year. No other tight ends aside from Ebron. Just five players have caught a touchdown pass. The 2017 team had 10 different players catch one. The 2016 team had 12.

It’s actually quite unusual to have so few targets, and hasn’t happened since the 2008 Super Bowl season, a year in which Roethlisberger was banged up all year and only threw 17 (out of 19 total) touchdown passes.

But this year, it speaks to the production, health, and stability of their core investments in the receiving game that they have all produced. All of them have at least 30 receptions, and four out of the five have over 500 receiving yards. The Steelers put together what they thought would be a talented group, and they were proven right.