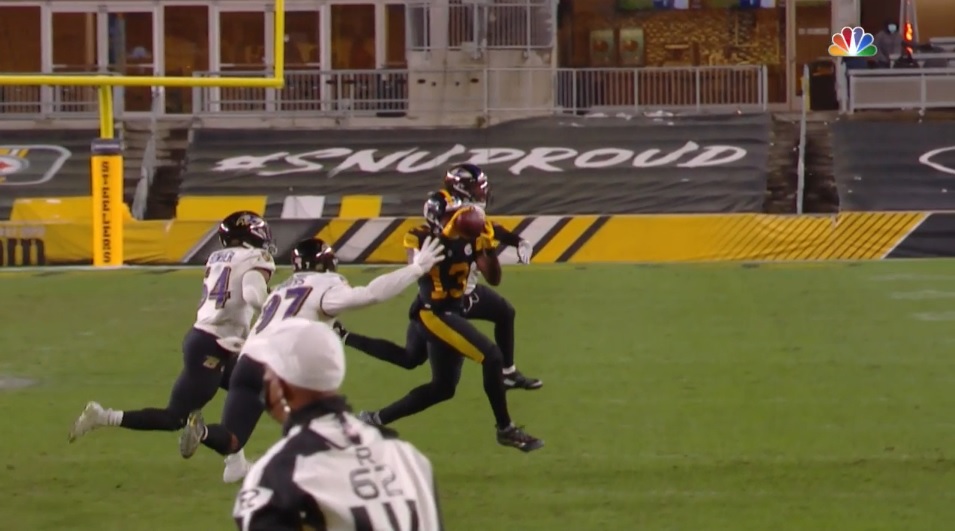 Announcer Cris Collinsworth summed it up well. Every breath in Pittsburgh was held as Ben Roethlisberger fired a lollipop over the middle of the field, in triple coverage, on third down late in the game. It could’ve – probably should’ve – been intercepted. But James Washington somehow came down with the football, another example of him maximizing the limited opportunities he’s been given.

After the game, an overall disappointed Mike Tomlin praised Washington for coming up big in a critical moment.

“He answers the bell when called upon,” Tomlin told reporters after the game. “And we’re appreciative of that. Week to week, we make plans that benefit us in terms of the matchup. Sometimes it includes him and includes him heavily and sometimes it doesn’t.”

Check out the play.

Ben to JW on the big 3rd down play.

If you listen to the podcast, you know Dave Bryan’s applauded Washington’s hands and those “lobster crackers” he’s displayed time and time again. Most games, Washington functions as a #4 or even #5 receiver in this offense. But he always seems to make the sure-handed play, particularly on a day where seemingly every other player was dropping passes.

Washington has only 23 receptions through eleven games. But three of those have found the end zone and 14 of his catches have gone for first downs. Clearly a guy making plays count. Duck Hodges and Zach Banner were quick to shoutout Washington on Twitter after his clutch catch.

Most underrated WR in the league!!!!!!!! @JamesWashington
Quiet. Works his ass off. Reliable

The first time ever we agree on something… https://t.co/L8ORgRVxfY

Washington’s work ethic has been praised by players and coaches. He got himself in much better shape for his sophomore season in 2019 and was one of the only bright spots of the offense, catching five touchdowns on 44 grabs. The health of guys like JuJu Smith-Schuster and drafting of Chase Claypool has reduced Washington’s role to backup duty. But he’s also giving the Steelers some of the best depth at the position in football. And for that 4th down moment, he gave them the biggest play of the game.