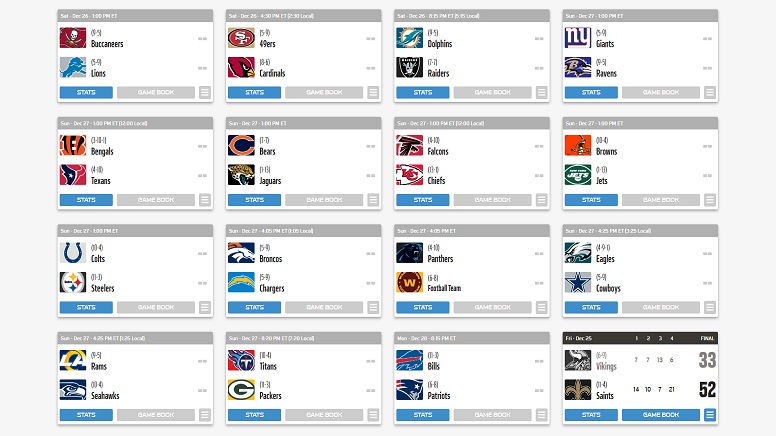 The Pittsburgh Steelers remain the AFC North leaders entering Week 16 and they can wrap up the division in a few different ways on Sunday. Winning the top seed in the AFC is no longer a concern thanks to their loss on Monday night, however. The Steelers play Sunday afternoon against the Indianapolis Colts so that means we all get to sit back and watch all the Saturday Week 16 action. So, with that, here’s a look at a few other games Steelers fans might want to pay close attention to on Saturday and Sunday.

If the Dolphins are to make the playoffs and help keep the Baltimore Ravens out of them, they need to first win their final two games. The Raiders are likely to be eliminated in some way, shape or form in the final two weeks so root for the Dolphins to deliver the final blow on Saturday night in Las Vegas. A loss by the Dolphins Saturday results in the Ravens jumping into the No. 7 seed in Week 16 if they win their Sunday game.

The Ravens playoff hopes are very much alive entering Week 16 even with them on the outside of the seven-team bubble at the No. 8 spot. There are six teams battling for four remaining playoff spots entering Week 16 and that list is sure to shrink by one this weekend. The Ravens path to a playoff spot is very strong if they win their final two games with the first of them being at home on Sunday against the New York Giants. A Sunday loss to the Giants, however, would really cripple their chances. There’s never been a better time to root against the Ravens. If they make the playoffs, there is a good chance they will play the Steelers in the Wild Card round.

The Steelers can get the No. 2 seed in the AFC by finishing a half game or better ahead of the Bills. Is that a big deal? I guess it depends on which team is ultimately the No. 7 seed. If you would like to see the Steelers play the Dolphins in the first round of the playoffs, the Steelers will likely need to be the No. 2 seed for such a matchup to occur. The perks of having the No. 2 seed aren’t that great so if the Bills beat the Patriots Monday night, it won’t be the end of the world.