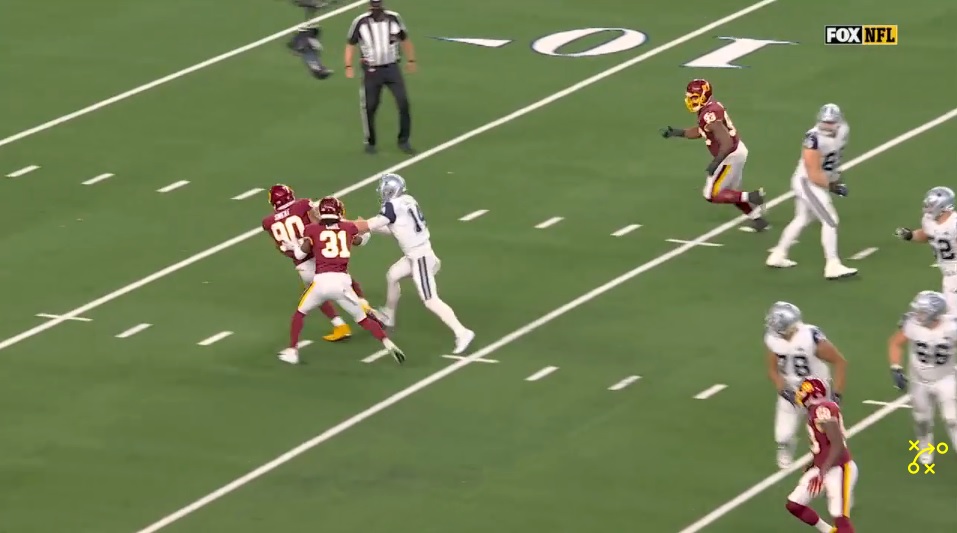 A decent group overall, putting up above average numbers. They’re allowing 4.3 YPC, 12th best of any defense, and top ten in TDs with just nine rushing scores allowed. They are a little below average when it comes to explosive runs. 32 of 10+ (tied 18th) and seven of 20+ (tied 20th). Former Steeler Jon Bostic leads the team with 76 tackles which is honestly shocking for fans who watched him play in Pittsburgh, I’m sure. Most weeks, he’s been their every down player though he’s been under 66% of snaps the past two weeks. Second on the team in tackles is safety Kameron Curl. Their safeties do a great job in run support which we’ll touch on in just a moment.

Washington runs a 4-3 front with plenty of talent up front. Good mix of young (Chase Young) and vets (Ryan Kerrigan) with high pedigree across the board. Tons of former first rounders make up this group: Young, Kerrigan, Jonathan Allen, Da’Ron Payne, and Montez Sweat. All first round guys. Allen has 45 tackles, a high number for a defensive linemen. In fact, his 37 run tackles are tied for most by any NFL big man alongside Indy’s Grover Stewart.

Overall, it’s a stout physical group. Like I mentioned above, their safeties do a great job filling the alley in the run game. Curl, Troy Apke, the whole group comes downhill and puts their face in the fan.

Some other defensive stats. 7th best defense in terms of points allowed. 22.1 per game, an excellent number in a year where offenses are scoring more than ever. That’s been aided by a strong third down defense (37.9% – 8th best) and the NFL’s #1 red zone unit. Offenses are finding paydirt just 48.4% of the time in the red area against Washington’s defense. One downside with this unit? Missing plenty of tackles. 85 of them, 6th most in football.

Perhaps the most underrated pass defense in football. Not many sexy, standout names here. But the results have been excellent. Believe it or not, the #1 pass defense in football in terms of total yards allowed. Just 194.6 per game. But their other stats are very good too. Only 7 yards allowed per attempt, just outside the top ten, while they rank tenth in INTs with ten and second in sacks – only behind Pittsburgh – with 36.

One weird Simpson’s Paradox-ish thing going on with their explosive pass defense. They are sixth in passes of 20+ yards allowed. Just 28 of those. Great number. But they are next-to-last in completions allowed of 40+ yards with six of them. So when they got chunked, they get chunked in a big way. Hard to explain or detail why.

Back to the most eye-popping stat I discovered. The sacks. Just two fewer than Pittsburgh. Three players have 5+ sacks on the season while twelve guys have 1+. Montez Sweat leads this group with six followed by Ryan Kerrigan’s 5.5 and Tim Settle’s 5. Chase Young right behind them with 4.5. And they’ll be aggressive with their DBs, who have combined for 5.5 sacks this season. That’s despite an average blitz rate of 28.3%, ranking 15th in the league. They also take the football away: Sweat, Young, and Da’Ron Payne have each recorded two forced fumbles this year. This defense is top ten in pressure, 7th at 23.7%.

It was clear on tape but we can add the stats to it as well. No team runs as much Cover 4/Quarters as Washington. Nearly 1/5 of the time.

Couple examples of it on tape.

They also run plenty of man coverage, especially in the low red zone. You can get after this defense with picks and traditional man beaters.

As a pass rush unit, few teams run as many twists and games as Washington. Probably even more than Pittsburgh. Get them from both sides all the time.

And sometimes they’ll mess with your o-line’s head and try to fake you out. It didn’t work but check out Jonathan Allen (working on Dallas’ LG) fake the stunt here. Turns his head to try and bait the linemen before continuing his rush. Pretty cool.

The Washington Football Team comes to Pittsburgh with a lot of rest after playing on Thanksgiving and on a two game winning streak. The offense has looked better with Alex Smith under center and the defense has given up 25 total points the last two weeks. There is a lot of talent on this defense and they are on their way to becoming quite formidable.

The front four of their defense ranges in age from 21 to 25 and are an impressive young group. At the left defensive end is Montez Sweat who has a good burst at the snap, good length and strength to set the edge and leads the team in sacks (6).  He is also used at times to spot drop in Zone coverage. Jonathan Allen is the 1 tech and has the quickness to shoot gaps in a 1 gap scheme, can stack and shed offensive lineman playing 2 gap and shows very good pursuit all over the field. Next to him is Da’Ron Payne the 3 tech defensive tackle. He has very good balance plays with good leverage and likes to use a hand swipe with a club/rip to the inside when pass rushing. Allen and Payne will slide between the 1 tech and 3 tech spots to keep the defensive over front to the strong side of the formation. On the right side is rookie Chase Young an incredible athlete with a high motor who uses his hands well with a variety of pass rush moves. He can win with power rushes or bend around the edge.

Allen will read the blockers and work through the traffic showcases his speed to his right to chase down the WR on the fly pass.

The backup defensive linemen are led by veteran Ryan Kerrigan who can still get after the quarterback. He does well transferring speed to power or using a stab/rip to the outside and sets the edge against the run. James Smith-Williams is a 3 tech with good length and a solid bull rush and is better as straight line rusher lacking bend and flexibility. Tim Settle is a wide bodied 1 tech inside with very good lateral agility, pad level and quickness.  Casey Toohill rounds out the bunch.  He was with Philadelphia earlier in the year but didn’t play against the Steelers. He has solid hands and good pad level with a good motor.

Kerrigan (91, right side of screen) is only playing about 60% of the snaps compared to starters but he is second on the team in sacks (5.5).  Here he converts speed to power and walks the right tackle back to the QB to get the sack.

At linebacker former Steeler Jon Bostic is the MIKE linebacker and is a strong tackler. He is best between that tackles and is solid in Zone coverage. Cole Holcomb is the SAM linebacker with good mental processing, gets downhill quickly and can cover running backs in space or cover the deep middle in Tampa 2 coverage. Kevin Pierre-Louis is the WILL linebacker and is aggressive filling the gaps, has good athleticism and comes out in Nickel.

Veteran Thomas Davis is in his 16th year and is used in some sub packages and diagnoses plays well, will disrupt screen passes and can cover tight ends one on one. Shaun Dion-Hamilton is one of nine Alabama Crimson Tide players on the team. He reads his keys effectively, has solid hand usage to hold off blockers and pursues the ball well.  Khaleke Hudson was used in a lot of ways in college including rushing the passer. He plays mostly on special teams and is a hardnosed player and willing tackler with solid quickness.

Holcomb (55) beats the RB to the hole near the goal line and makes a tackle for a loss.

Washington lost their strong safety Landon Collins to a torn Achilles earlier in the year. Rookie Kamren Curl has filled in admirably and is second on the team in tackles.  He’s a tough, physical tackler who’s aggressive in the box, will be used to blitz and is better in Zone coverage. Troy Apke is the speedy free safety has good range as the deep safety, is an adequate tackler and his angles in space can use some improvement. Jeremy Reaves is the third safety and diagnoses well versus the run and has the speed and range to chase to the sideline. Cole Luke is a special teamer with good awareness and a solid tackler.

Here Curl (31) is in the box as a linebacker (left side of screen). He processes, gets downhill through the TE’s block and gets in on the tackle.

The starting corners are Ronald Darby on the left and Kendall Fuller on the right.  In the games watched they played a lot of Off Man coverage and Cover 3. Fuller is from a family of defensive backs and is a smart defender with smooth movements. He leads the team with 4 interceptions and they usually come from him knowing where the receiver wanted to go and beating them to the spot. Darby leads the team with 9 pass breakups and is often in off coverage where he can play downhill to the ball.  He gives up a lot of space so think you can attack him with under routes to try and set up the double move. Jimmy Moreland is the nickel corner with good ball skills and solid awareness in Zone. He has good change of direction and will help against the run. Two other corners on the roster are Danny Johnson and Fabien Moreau. Johnson has speed, is best playing on the outside in Zone coverage and is used as the kick returner. Moreau is a former starter that plays with physicality and has solid ball skills.

This is an interception from Fuller (29).  He knows he has help inside and when the WR breaks outside he beats him to the spot and makes nice play on the ball.