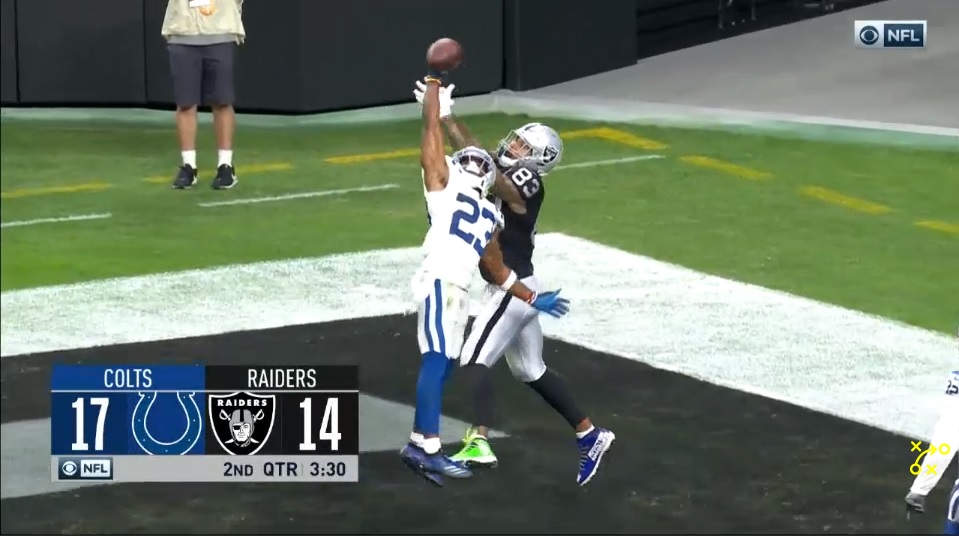 The Colts’ boast one of football’s better run defenses. The 3.8 YPC they allow is tied for the second fewest in the league and the 98.1 yards they give up ranks 5th in football. It’s a stout, 4-3 front led by an excellent DC in Matt Eberflus, whose doing a tremendous job over there in Indy. As you might expect, they don’t give up a lot of big runs either. Rank 4th in both runs of 10+ yards (32) and 20+ yards (only four). So Pittsburgh will have a much tougher challenge running the ball against the Colts than it was against the Bengals, who had a bottom-third unit.

In the middle sits LB Darius Leonard. Tackling machine. He has 109 tackles this season, tied 11th in the league, despite missing two games this season. Injuries have been the only negative mark on his resume and yet, since he came into the league in 2018, he’s 4th in football with 393 tackles. That’s 9.8 per game.

This can apply to the passing game and it’s not breaking news, but when teams use two-back personnel, so a RB and a FB, the Colts almost always play single-high safety and often Cover 1. Bring that SS into the box to defend the run (again, fairly obvious). So if you want to bring a FB in like Derek Watt – looks like he’ll play this weekend – expect to see heavier fronts. But this is a chance to use playaction off it. On this play, the Raiders hit TE Foster Moreau for a 47 yard score down the seam. 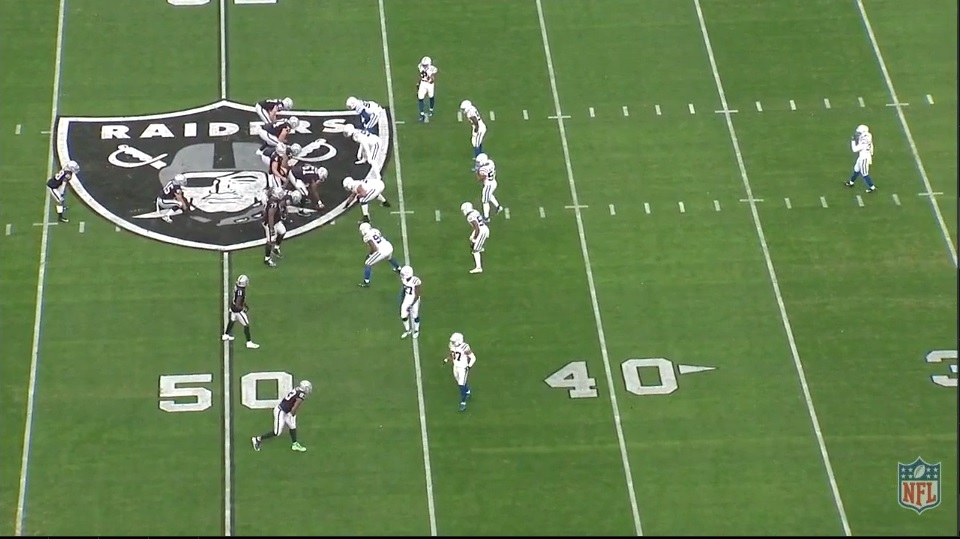 They do tend to crash and flow hard on zone schemes, which creates cutback lanes if the back can see it and hit it. Something to keep in mind.

Overall, this d-line is very good. DeForest Buckner is one guy in particular who worries me. Former first round pick with a ton of size and length. 6’7 with 34+ inch arms. He’s someone who has the potential to get into throwing lanes, knowing how quickly Ben Roethlisberger gets the ball out of his hand.

Some other defensive stats. Nearly a top-ten scoring defense. Allowing 22.9 PPG, tied for 11th best. They have allowed 20+ points in five straight games after giving up that mark once in the first month of the season. The defense and team did have its roster depleted due to a COVID outbreak/injury issues a few weeks ago and they’re a healthier team now.

Pass defense has been highly opportunistic. 15 interceptions as a group, 5th most in football. They do a good job keeping the ball out of the end zone, too. 5th fewest pass TDs allowed at just 19. Some of the other pass defense numbers aren’t as pretty. 24th in YPA (7.5) and 17th in completion % (65.6). Usually higher YPAs correlates to lower completion percentage. Not so much here.

The Colts’ defense has allowed 47 completions of 20+ yards, tied 23rd this season. Only six of those have gone for 40+, which is top ten, so the intermediate areas seems to be where you can hit this team.

The pass rush hasn’t been elite but it’s been good and very dispersed along the front. 33 sacks as a team, that’s right about average, but their pressure rate cracks the top ten at 24.7%. And it’s coming primarily from their front four. Indy blitzes as little as almost any team in the league. Just 17.6% of the time – only the Chargers blitz less. It’s very much an old-school, Dungy-like Tampa 2 defense.

Three Colts are tied for the team lead in sacks: Denico Autry, Justin Houston, and DeForest Buckner. Each have 7.5. They’re just one of three teams to have three players with 7.5+ sacks, joining Pittsburgh and Tampa Bay. So a lot of guys to get after the QB. Someone will be singled up and the Steelers’ o-line will have to win their battles up front. Can’t give everyone help. Buckner has 24 QB hits this year, tied for 5th most, and their defense has recorded three safeties. Two by Houston, one by Buckner.

As I wrote at the top, this defense is taking the football away. 24 takeaways are third most in the league. Slot corner Kenny Moore, a splitting image of Mike Hilton in terms of style, leads them with four. Five DBs though have at least a pair. And they’re pretty good at making house calls. Four pick six’s this season, which leads the league and one ahead of the Steelers’ three.

Schematically, they play a lot of split coverage. Will zone to the trip side and then MEG/lock the cornerback to the X receiver backside.

Or they can play Cover 6, a quarter-quarter-half defense. Play Cover 2 to the X receiver side, Cover 4 to the trips side.

And they run a good deal of traditional, Tampa 2. Against those two-high looks, that’s when you can attack the deep middle of the field. And the Steelers need to.

This is a big battle in the ‘Burgh with the Colts coming to Heinz Field on Sunday.  This game should have implications in the seeding for the playoffs. The sputtering Steelers offense will have their hands full this week against a well-coached Indianapolis defense.

The defensive line as a whole is very good at closing the pocket on the quarterback. They have three players tied for the team lead in sacks with 7.5.  Up front they have DeForest Buckner who has been a big addition this year.  He plays the 3 tech with a high motor and has the quickness and power to give guards fits against the run and while rushing the passer. Next to him is Grover Stewart the 1 tech.  He has a strong anchor vs the run, makes plays in his gaps and can get a good push inside with power rushes. Denico Autry is the left defensive end and uses his hands and length well, shows good backside pursuit and kicks inside on passing downs.  Veteran Justin Houston plays on the right side and sets the edge well, has heavy hands and is a savvy pass rusher.

The rotational defensive linemen include Taylor Stallworth and Tyquan Lewis on the inside.  Stallworth has solid quickness at the snap and solid anchor and fits as a two gap defender.  Tyquan Lewis has a good motor, good play strength and likes to use that strength to yank blockers out of his way. On the edge they have Al-Quadin Muhammad who showed good effort setting the edge and when rushing the passer he likes to use a long arm/stab and a rip. Kemoko Turay has good quickness at the snap and is an aggressive pass rusher almost to the point of out of control at times. Ben Banogu has a developing pass rush plan, good burst and quickness on inside pass rushing moves.

Here is clip of the defensive line closing the pocket. From left to right the have Houston (50), Autry (96), Buckner (99) and Turay (57) and they are able to form a box around the QB and then compress to the middle.

The second level of the defense is strong.  Anthony Walker is listed as the MIKE linebacker. He has good speed, pursues the ball well, is a strong tackler and reads screens well.  Darius Leonard is the WILL linebacker and can move sideline to sideline, diagnoses well, can cover RB/TE in Man coverage and has good awareness in Zone. He is the team’s leading tackler (112) by 27 tackles and he missed two games. He will take on blocks with the wrong shoulder and doesn’t attack downhill as much as you would like. Bobby Okereke is the SAM linebacker and is a very good athlete and is a smooth mover in Zone, processes the play quickly and plays under control. Zaire Franklin is a reserve who is athletic and fast with solid instincts who is better in space.  Matthew Adams is another athletic player who is on the smaller side and is a solid tackler but adequate in coverage.

The tandem of Okereke (58) and Leonard (53) are a really good.  Here you’ll see them both read the play well, slide in sync to the left to fill gaps and then surround the runner.

The safeties are led by strong safety Khari Willis who makes plays all over the field.  He is often in the box and will cover TE’s in Man coverage or split out with RB’s. He forces the plays inside from the edge, is a very strong tackler and is used to blitz. Julian Blackmon is the fee safety and spends most of his time in deep coverage as the single high safety. He has good size and speed is an aggressive tackler but takes poor angles at times. Tavon Wilson is a veteran strong safety and he’s better playing in the box, reads runs well and in coverage is best playing downhill to the ball. George Odum has good size and length, has limited snaps on defense but leads the NFL in special teams tackles.

Willis (37) is lined up in the box as a linebacker. He drops into Zone coverage and reads the quarterbacks eyes and gets additional depth to break up the pass to the crosser coming from the other side.

Rock Ya-Sin plays the left cornerback positions and his best in Press coverage being physical at the line of scrimmage. He has tight hips, will jump pump fakes and is a solid tackler. Xavier Rhodes plays on the right side and shows solid effort vs the run, plays a lot of trail Man coverage and will get out of position playing in Cover 3. Kenny Moore is the nickel corner with solid awareness in Zone, will be used to blitz and has very good ball skills attacking the ball in the air totaling 11 pass breakups this year. T.J. Carrie is a veteran who can play inside or outside and has been splitting snap with Ya-Sin recently.  He is a willing tackler with solid processing skills. Isaiah Rodgers rounds out the group and is fast and undersized with solid ball skills and is a good return man.

Moore (23) is to the bottom of the clip and will have the tight end in Man coverage. He plays with outside leverage and closes quickly once the ball is in the air to undercut the route and knock away the pass. He’s been very good covering the seam route this year.