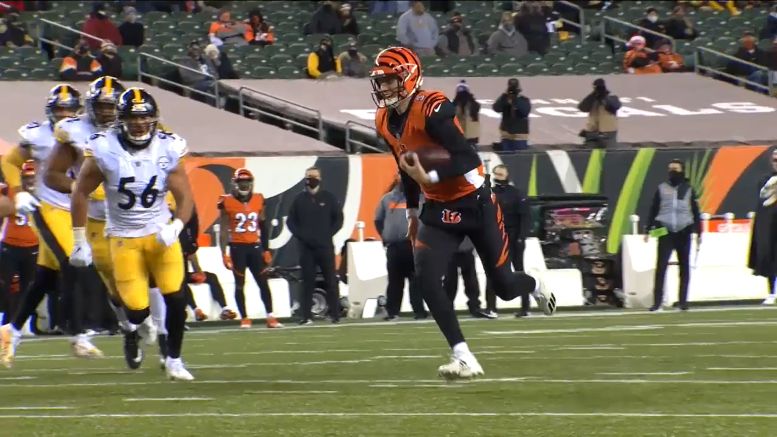 The Pittsburgh Steelers may have thought that they caught a break when it was announced they would be facing the Cincinnati Bengals’ third-string quarterback, Ryan Finley. Even though some Steelers players acknowledged that it can be harder to gameplan for when you’re not familiar with a quarterback who hasn’t played much, they did actually face him in a start last year.

But while he did show some mobility during his three starts last season as a rookie—he had 10 total rushes for 77 yards, though just two rushes for eight yards in his start against Pittsburgh—the Steelers were clearly ill-prepared for the prospect of his mobility.

Not dissimilar to Garrett Gilbert earlier in the year when they faced him with the Dallas Cowboys, Finley’s running and mobility became a major problem for the Steelers’ offense, something head coach Mike Tomlin mentioned after the game.

“I thought the quarterback-designed runs were significant”, he said. “The quarterback draw, I think on third-and-6 when they went empty, was a big play for them. They had a nice plan, particularly in regards to the quarterback runs. I think that guy had 50 yards and a touchdown. You have to give him credit for that”.

In total, he carried the ball 10 times for 47 yards. Some were more effective than others—most notably, a 23-yard touchdown run in the second half that pushed a lead from seven to 14 after Pittsburgh had just scored 10 unanswered points. And that was a play they’d never run before.

“That’s not even a play that normally is a read, but he just tagged the word ‘read’ on it”, Finley said after the game about that playcall. “He said if everything crashes, just pull it. That’s pretty much what happened, and I walked it in. “We had not run that play. That was Zac just being really headsy and tagging it on there. Why not?”.

Why not indeed, because it proved to be a crucial, momentum-killing dagger for an offense that just looked like it had awoken out of a slumber. They spotted Cincinnati 17 points in the first half, and you really have to shut the other team down when you’re trying to catch up from that far back.

“It just kind of came about”, Finley said of their gameplan to have him run the ball a good amount of times. “I thought Zac Taylor called an unbelievable game. It was the type of game we were expecting — gritty at times with a lot of running the ball. It was really well done from everyone involved”.

And it handed the Steelers a gutpunch of a loss that saw them tumble from the second seed to the third seed, eliminated them from contention for the first seed and a postseason bye, and has them scrambling for answers as the AFC North crown remains more up for grabs than it has been since the first game against the Cleveland Browns.