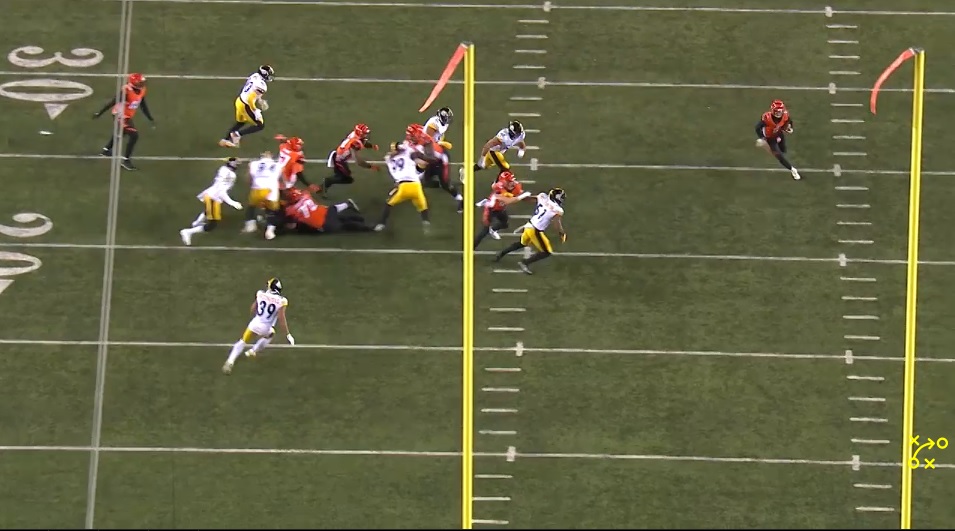 It’s not about the X’s and O’s. It’s about the Jimmy’s and Joe’s. That old football saying means – personnel > scheme. You can have the greatest scheme on paper but if a busload of Alex Kozora’s (all-state team manager, I’ll have you know) matches up against Alabama, it doesn’t matter how good my plan looks on paper.

But in an NFL landscape where the talent margin is thin, even pitting the best teams against the worst, scheme matters a whole lot. And if you win that battle enough, or at least in enough key moments, you can pull off the upset. Just as the Cincinnati Bengals did Monday night.

After their 27-17 shocker of win against the Pittsburgh Steelers, both coaching staffs and teams talked about the Bengals’ QB run game. Mike Tomlin tipped his cap to the Bengals for letting third-string QB Ryan Finley pull the ball and run it himself. And Finley credited the Bengals’ coaching staff, who knew how little the Steelers’ defense were respecting the QB run threat. Pairing their scheme with the Steelers’ inability to adjust in-game is a big reason why the Bengals hung on.

Here’s how the Bengals won with their QB Draw and Zone read concepts.

Twice on third down Monday, the Bengals called a QB draw for Finley. They were set up the same way. In this example from the first half, Cincinnati’s facing 3rd and 5 from the Steelers’ 37. Initial 3×1 alignment with the back motioned to the trips side flat pre-snap in an effort to displace a defender from the box and effectively make it OL vs DL and the QB finding a path once he takes off.

Here’s the first example of it. And Pittsburgh actually stopped it. They’re in a 1-4-6 dime package and blitzing CB Mike Hilton from the trips/field side. Marcus Allen gets pulled out wide by the RB’s motion but gets replaced by Hilton. The Steelers are running a stunt up front (because they assumed pass) and the Bengals struggle to block it. Heyward is able to make the tackle on Finley for no gain.

But they try it again in almost the same situation in the 4th quarter. 3rd and 5 on the Steelers’ 39. Same formation. 3×1 bunch to the field with the back motioning to the flat right before the snap. Pittsburgh’s in their 2-3-6 dime package this time. Again, running a stunt between Heyward and Highsmith.

The back’s motion pulls Marcus Allen out of the box so he can’t be part of the run fit when Finley takes off. The Bengals block it up front a lot better, the Steelers don’t have anyone at the second level (because they only had three linebackers this time, unlike the four they had in their 1-4-6 package in the first example) and Finley runs off left tackle at the failed stunt between Heyward/Highsmith. Gain of eight. First down.

Here’s the one the Bengals really countered Pittsburgh with. All game, Steelers’ outside linebackers crashed down on the back at the mesh point. Not respecting Finley’s ability to keep the football himself. Collection of clips before, even one of Finley carrying the ball, but the Steelers didn’t change the way they attacked the mesh point. TJ Watt, Alex Highsmith, the mission was to drive downhill on the back.

When Finley gave the ball to the back, the Steelers’ run defense held up. That’s the benefit of going all-out on the running back. No one to block them backside, they aren’t allowing themselves to being “read” by the QB and they’re able to fly in to make the play.

And so, as Matthew Marczi wrote about yesterday (linked above), the Bengals told Finley to “tag” the below play with the ability to read the OLB. If Pittsburgh kept crashing the way they had, Finley now had the freedom to pull the ball and keep it himself. Even though the play wasn’t designed that way and the team hadn’t practiced it before.

But it worked. On Finley’s touchdown, Highsmith crashed down to attack the running back. Finley kept the ball for a walk-in touchdown.

I don’t see anyone who is supposed to account for the QB here. So I don’t blame this on Highsmith or an ILB for not scraping over the top. There simply wasn’t a plan for the QB keeping the football. Ryan Finley certainly isn’t Lamar Jackson but the Steelers haven’t had good answers for option offenses. Whether that’s ones they know they’re going to see, like the Ravens, or adjusting in-game, as what happened Monday night.

Speaking broadly, the Steelers’ offense and defense are coached in inverse ways. The offense generally has a poor gameplan, an ugly opening script. That’s why they haven’t scored a point on offense or special teams in the last month (and I mean that literally, they’ve scored zero). It’s why they have just one opening drive TD the last two and-a-half years. But they do better adjusting in-game once they feel out their opponent, even if that sometimes means just letting Ben Roethlisberger run the show.

Meanwhile, the Steelers’ defense tends to come out with great script. A great plan. Even in the losing streak, they’ve dominated the first half against Washington, Buffalo, and really even Cincinnati (three offensive turnovers in the first half put the defense in a tough spot). In the second half, you’re seeing teams do a better job of counter-punching and winning the coaching battle. While the Steelers still have lots of talent that can win out, after all, they did give up just ten second half points to the Bengals, the X’s and O’s are tripping them up.

Cincinnati did a great job of testing the waters with plays early, seeing how Pittsburgh reacted, and then adjusting and countering to win the game late.