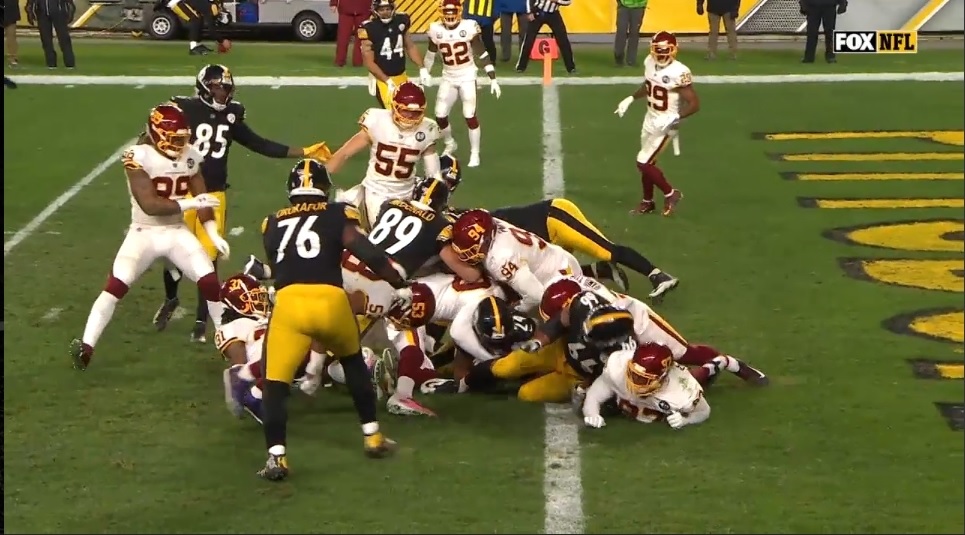 The Pittsburgh Steelers’ game stinks. There’s no getting around it. And it was as obvious as ever in Monday’s loss to Washington. The Steelers ran the ball for 21 total yards, gained just one first down on the ground, and repeatedly failed in short-yardage and goal line situations. To the point where running the ball on third or fourth and short wasn’t even a viable option anymore. Hard to blame them.

What’s the solution? According to Mike Tomlin, the problems are multiple.

“We’re just not doing good enough,” Tomlin said during his Tuesday presser. “I can comb through it with a whole bunch of minutia but the bottom line is popcorn. If it was one identifiable thing, then you would pluck that one thing out and move on with your day. It’s probably a myriad of some of the variables that you mentioned.”

Nowhere was that inability to run the ball clearer than the failed goal line sequence in the first half. First and goal at the Washington one, here’s how the next four plays went.

Three runs, zero yards, and a laughably bad attempt at throwing the ball to an offensive linemen (Hawkins fell down and wouldn’t have scored even if he caught it).

“I live by a coaching creed,” Tomlin said. “If you can’t get a yard, you don’t deserve to win. That was the case for us in this game.”

These problems aren’t new to the offense. After a strong first month of the season, the run game has gone in the tank. Tomlin said the goal is to address the “popcorn” and return to their early-year success.

“We’ve just got to not blink and we’ve got to continue to do what it is that we’ve done to produce quality play in that area in the past. And get ready for our next opportunity to answer those questions.”

During the first month, the Steelers ran for 100+ yards in each game and collectively averaged over 4.5 yards per carry. Since, they’ve been over the century mark just twice and their YPC has plummeted to 3.1 per try. They’ve struggled just as much in situational football, highlighted by yesterday’s repeated failures.

Sunday night’s game against Buffalo will be the next chance to get back on track. James Conner should return off the team’s COVID list and the Bills have one of football’s worst run defenses, allowing 4.7 YPC (tied-28th worst) and 126 yards per game (24th).