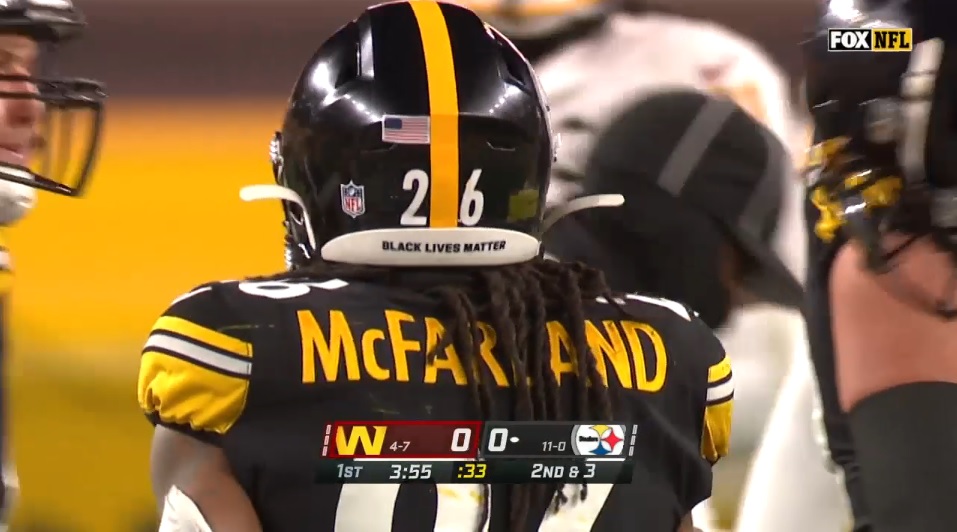 Claypool saw only 44% of the offensive plays his lowest since week two. His two receptions were both helpful to Ben Roethlisberger. His first was and Out route he turned to an out and up before working back to the QB. His second catch was on a Post inside of the safety as Roethlisberger was climbing in the pocket. On both receptions he showcased the ability to adjust up for the ball. He was used to block on 4 different screen/short passes to set up a fake block fade that drew another pass interference penalty. Over half of his routes were deep routes including the fourth down throw to Anthony McFarland.

He played on kick return and the first couple punts as the gunner. On the second punt Washington used 3 people to attempt to block him and he still got downfield with ease.

Claypool (11) is the gunner at the top of the screen. He has two blockers on him and another will come to help.  He shoves one to the ground and another out of his way and it took friendly fire from Ola Adeniyi to take him down.

Highsmith was solid in his first NFL start.  He recorded two tackles early and finished the day with five.  He was strong on the edge holding his ground and only allowed one run to get outside of him. He showed good pursuit chasing from the backside and downfield.

Here is Highsmith’s (56) first tackle doing a nice job setting the edge and yanking the OT out of the way to make the play.

While rushing the passer he looked good, his best game overall.  His burst was good off the edge and he mixed up the rushes in his pass rush plan. Early in the game he was using a lot of outside rushes using stabs, chop/rips and showed good balance while bending around the edge.  He did a nice job using speed to power rushes to get some push in the pocket. He was used as a looper once on a stunt and as the penetrator twice with no success.

Later in the game he sparingly used a club/rip to the inside that was fairly successful on 3 of 4 attempts including on the Stephon Tuitt sack. He also used a spin to the inside once that had potential but he tripped while accelerating after the spin. I would like to see him counter more with his hands when his first move is unsuccessful but that will come with experience.

Highsmith avoids the cut block and keeps his balance while keeping an eye on the QB and finishes with really good hustle to the outside to stop the screen.

McFarland looked like he was going to have a bigger role playing 7 of the first 18 snaps but that was not the case. He played the first play of the second quarter and then only 3 of the next 51 plays. As a runner he was okay.  His first run was off tackle to the right and if he continued outside it may have been more successful but he cut back inside. His second run was good.  It was up the middle and he was patient until the hole opened and he accelerated threw it quickly. Run number 3 was another run to the right side and again instead of accelerating out he cut back inside losing a yard. His final run was a draw through a big hole and he gained nine.

He was kept in to pass block a couple times but was not needed and he motioned out wide a couple times including the fourth down throw late in the game.  He ran a Sluggo route but the ball was thrown behind him and he couldn’t get to it.

McFarland (26) was patient on this run and waited for the hole to open up instead of cutting outside.

Dotson was used on the two extra point attempts as well as the field goal. He was the right guard and twice Washington tested him with two rushers in his face but he held his ground on both.

This was his third game being active but he only got in for one play. He was tasked with covering the tight end in Man coverage on a curl route and he was in good position.

Except for the couple of punt coverage snaps that Claypool played Pierre got his usual special teams snaps.  He was not involved in any tackles but was successful winning reps as the gunner to be in good position on several fair catches. He was strong while blocking on punt return keeping the Washington gunners at bay for most of the game.  On kick cover he was the safety on the kicks hanging back in case a returner broke through.