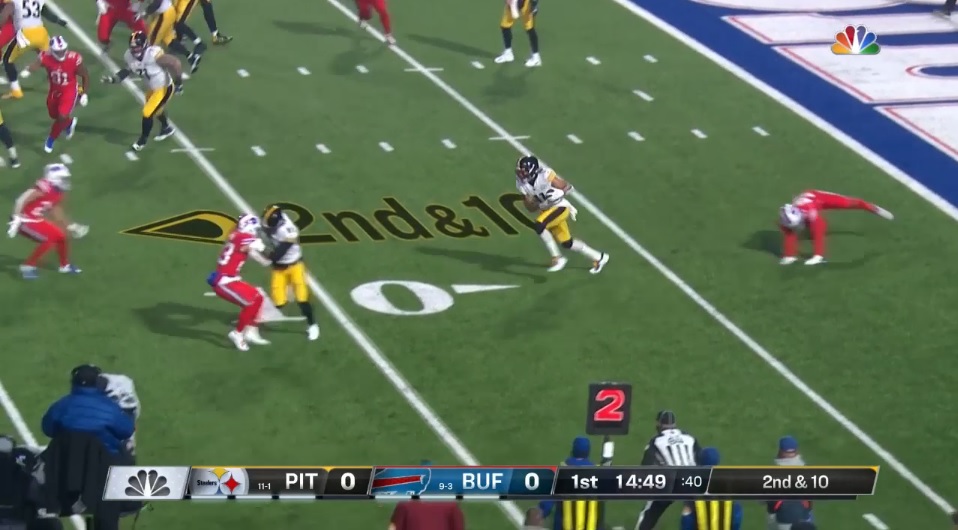 He was used heavily in the first half with Diontae Johnson getting a break.  He ran routes on all three levels with the most common being Out routes followed by Slants and Fade/Go routes.  Tre’Davious White gave him a strong jam early in the game that caused him to stumble backward.

His first reception was on fly motion behind the line of scrimmage. He did well to make one guy miss and gain five yards. His second reception was a quick out in the middle of the first quarter and his final catch came in the middle of the third quarter on a curl. He only played 4 snaps in the second half and we learned from Mike Tomlin this week they are limiting his snaps to try and avoid him hitting the rookie wall. His effort as a blocker on offense was inadequate.  He wasn’t getting himself in position often leading to him lunging and missing.

On the first kickoff he stayed facing the returner too long and by the time he turned around there were tacklers already running by him. The second kick return he did was in better positon to kick out defender.

Here is Claypool (11) on the right side.  His job is to block Taron Johnson (24). If he gets outside he should be able to wall him off easily with his size and 40 pound advantage. But he goes inside of Johnson and he allows Johnson to the outside and he gets in on the tackle.

At the bottom of the video here is the jam from White that knocks Claypool back and he pulls White to the ground with him.

Against the run he looked strong taking on pullers and setting the edge in limited opportunities. Most of the runs went to the middle or away from his side.  He showed good pursuit from the backside but was unable to make any tackles. His lone tackle came in the red zone lined up in the A gap splitting the blockers and tackling the runner in the backfield.  He also limped off with a lower leg issue after this play but was able to return.

Rushing the quarterback was largely ineffective.  The majority of his rushes were attempts around the edge and the Bills left tackle did a nice job to keep him outside or push him up the arc most of the time.  He had an effective ghost rush but stumbled before getting to the quarterback.  There were a couple of bull rushes that got some push in the pocket.  He looped to the inside a handful of times with no success but he did a nice job as the penetrator to open a lane for Cam Heyward.

Too often when pass rushing; the left tackle had the advantage getting his hand on Highsmith first allowing him to get control.  He needs to work on countering with his hands to keep his body free.

Here is the ghost rush where he will fake a stab with his left arm and duck under to the outside. He gets the edge and stumbles forcing the QB out of the pocket.

Dotson came into the game after Matt Feiler went down with a pectoral injury.  As a run blocker he was solid for most of the game able to hold his ground and got solid push on double team and combo blocks.  However there were three blocks were I thought he was supposed to come off the initial block and climb to the next level. He didn’t and ended up leaving a defender in the hole for the running back to try to avoid.

As a pass blocker he was solid overall.  His hand punch timing and strength was good and his feet were solid.  He was able to anchor solidly but got a little deep in the pocket at times.  His lateral agility was up and down being good on some reps and looking like he should have been quicker on others. Unfortunately he too had to leave the game with a shoulder injury.

On this rep Dotson (69) will double with the left tackle on the defensive tackle (91) he should have climbed to the second level to block the linebacker (54).

Here was a good rep in pass pro where he’s going to pick up the blitzing linebacker (49) with quick feet sliding to the inside using good hand placement and strong push when the linebacker jumps.

Haven’t seen this often but the defensive tackle beats Dotson on this play with quickness and leverage to the outside to put Dotson on the ground.

Antoine Brooks (6th Round) – Did not play

As the gunner on punts Pierre did a nice job to win his chances and beat the blockers downfield to be in good position to force fair catches or get behind the returner in case he let the punt go. He had a couple struggles as blocker on punt returns. On one play he got beat off the line of scrimmage leading to his man to get in on the tackle and he stumbled to the ground on another. He did draw a block in the back penalty on a punt in the third quarter during a good Buffalo return.