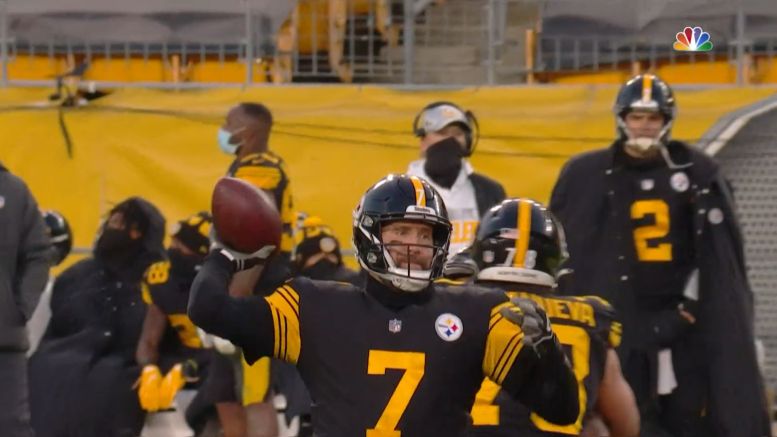 It is unfortunate for Ben Roethlisberger, one of the elder statesmen of NFL QBs, that he is having a sneaky MVP-worthy season in the midst of Patrick Mahomes doing just Mahomes things and the latter-career resurgence of Aaron Rodgers to the version of himself that won the NFL MVP back in 2011.

Otherwise, the 17-season veteran would likely be atop the discussion as a true contender for MVP.

At surface level, Roethlisberger’s argument for MVP is weak. The typical numbers one might look at to gauge MVP candidates – the “sexy” numbers” – aren’t considerably strong for Roethlisberger. His 2,800 passing yards ranks 14th in the league, his 25 touchdown passes are fifth best, his QB rating of 65.7 is well below the leaders, and his 67.5-percent completion rate places him at 14th in the NFL.

Where Roethlisberger does start to stand out, however, is in the advanced analytics. Specifically expected points added (EPA) and completion percentage over expected (CPOE).

First, let’s take a look at how Roethlisberger’s current 2020 EPA stacks up against those QBs who previously won the MVP dating back to 2000. The EPA number is pulled to only run through week 12 of the season in which the quarterback won the MVP to provide context to where Roethlisberger currently stands. 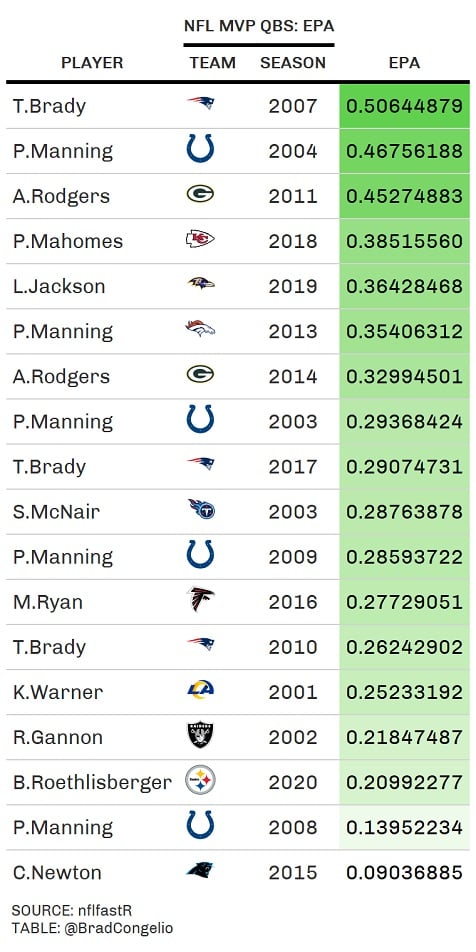 If one were to base the 2020 MVP race off of historical precedence, Roethlisberger would have virtually no chance at winning it at the conclusion of the season. His 0.20 EPA is the third-lowest EPA dating back to the 2000 season when a quarterback was given the MVP title. The only two quarterbacks with lower EPAs through the first 12 weeks of the season were Peyton Manning in 2008 and Cam Newton in 2015.

However, the above graph is a macro examination of the EPA metric. Perhaps Tom Brady’s .50 EPA thru week 12 when he won the MVP in 2007 was an abnormality, as it is quite a bit higher than even the second and third-place scores. If that is the case, where does Roethlisberger stand so far in the 2020 campaign based on EPA alone?

As the playoff race heats up, Roethlisberger is solidly in the top-10 EPA leaders in the NFL. Surprisingly, with his EPA rating of 0.20, he is outpacing the Seahawks’ Russell Wilson, a heavily-discussed contender for MVP, with a rating of 0.17. Further, so far this season, only the Chiefs’ Patrick Mahomes and the Packers’ Aaron Rodgers break into the 0.30-range of EPA. Compare that to the historical score for MVP winners and you will notice that players currently in Roethlisberger’s range are, more often than not, the “normal” range for EPA.

So, does that mean that Mahomes or Rodgers are a lock to win MVP because their EPAs are skyrocketing above the rest of the league at this point in the 2020 season? To answer that, we can look at EPA in another way: does the quarterback with the highest EPA always win MVP? My gut tells me “no.” Thankfully, we have the power to figure out the answer.

To do this, I am going to expand out to the end of the regular season to see what the highest EPA was at the conclusion of each season. 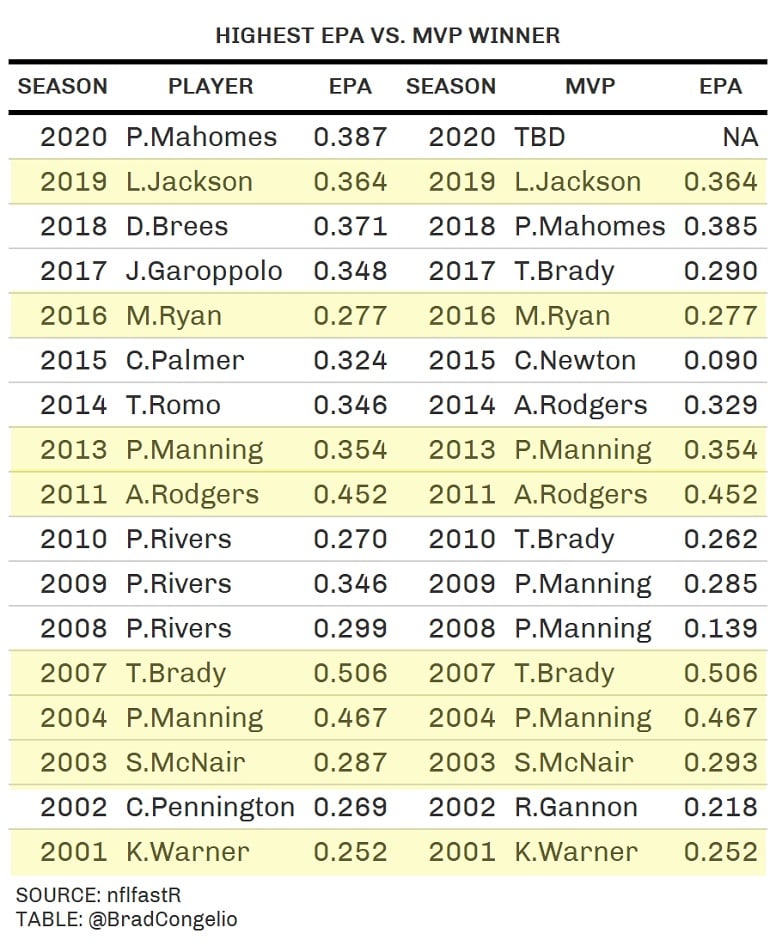 Highlighted in the above table are the instances in which the QB to finish the season with the highest EPA was also awarded the MVP. From 2000 to 2020, the MVP award has been awarded to a QB 17 times. Out of those 17 times, the winner’s EPA was also the highest in the league just eight times (roughly 47-percent of the time). Moreover, in the last ten seasons, it has happened less than half the time.

So, the point is this: EPA alone is not a strong indicator of MVP worthiness. If that is the case, then it is important to examine other metrics to see where Roethlisberger stands. 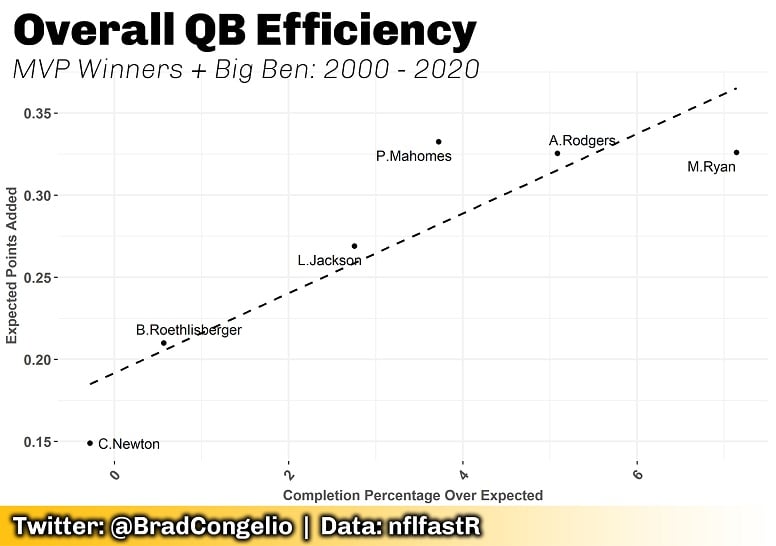 A QB’s efficiency is calculated by comparing the overall EPA to completion percentage over expected (CPOE). That said, CPOE is a relatively new metric which results in just five of the previous MVP winners to be plotted above. Regardless, while Roethlisberger does reside above the smoothed mean, he is still near the bottom. In fact, the only player worse than Roethlisberger is Newton who is, arguably, the worst MVP winner in modern history based solely on advanced metrics.

Again, though, examining QB efficiency in such fashion is doing so on a macro level. It is perhaps not fair to compare Roethlisberger to previous year’s MVP winners. While it does provide some context to where he stands against previous winners, we can also view the current 2020 standings based on QB efficiency: 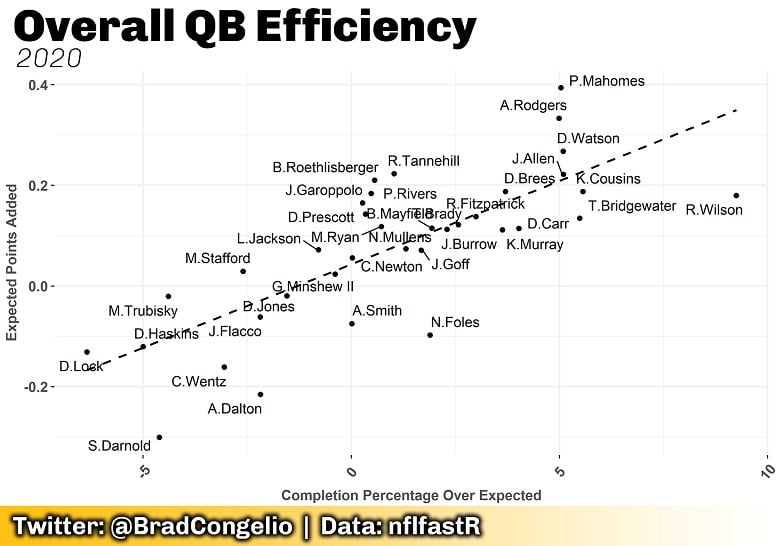 If not for Mahomes, Rodgers, and the Texan’s Deshaun Watson, Roethlisberger and the Titans’ Ryan Tannehill would be the favorites to win the MVP award based on overall QB efficiency. As well, perhaps the Bills’ Josh Allen and the Saints’ Drew Brees both sneak into the conversation because of their higher CPOE rating.

Unfortunately for Big Ben, if Mahomes and Rodgers keep up their current level of play, it is likely that one of them will be handed the MVP award. Mahomes is maintaining his EPA from his MVP season and has improved upon his CPOE. Rodgers is at nearly the exact some rating for each. If that was good enough for each to win one MVP award before, why would it not be good enough again?

In the end, Roethlisberger is having an MVP-caliber season … but it is being overshadowed by the overwhelmingly good play of Mahomes and Rodgers. In fact, Mahomes is having the best season for a QB based on the EPA of previous MVP winners since Rodgers won the award back in 2011. If you were to regress those two closer to the mean, Roethlisberger is in the middle of the conversation.