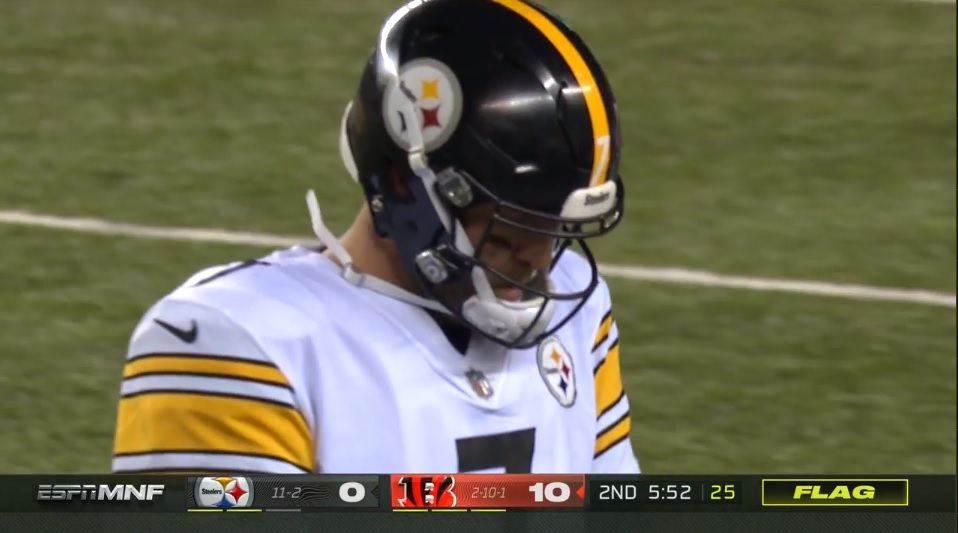 Ben Roethlisberger was predictably blunt about his performance tonight. But unlike where most fans are at, he’s remaining confident about the team’s ability to turn things around.

Roethlisberger was asked to evaluate himself after a 27-17 loss to a two-win Bengals’ team.

“I wasn’t good enough today,” was his short, sweet, and oh-so accurate point.

Roethlisberger finished the game 20/38 for 170 yards with one touchdown and one interception. He could’ve been picked off a half-dozen times. He had arguably the worst half of football in his career, sitting on negative passing yards until late in the second quarter and registering just 19 by halftime. The second half was better but the Roethlisberger and the offense still struggled. He threw incomplete on his final four pass attempts, including his final one to James Washington, which sailed high over his head.

Consistent pressure didn’t do him any favors, though that’s hardly an excuse for his poor play. While Roethlisberger was sacked just once, Bengals’ pass rushers hit him nine times. Cincinnati came into the game with one of football’s weakest pass rushes.

Despite the obvious frustration that comes with a third straight loss, Roethlisberger remains optimistic about the Steelers’ chances of righting the ship.

“I will never stop believing in these guys and this team. So we’ll push forward.”

Pittsburgh will have to push forward in a hurry. No longer is this team in contention for the #1 seed, despite sitting in that spot just three games ago. Now, they’re attempting to hold onto the AFC North crown. Just one game ahead of the Cleveland Browns with a rematch in the Week 17 finale. The Steelers will also have a tough contest against the Indianapolis Colts next Sunday. The Colts boast one of football’s best defenses.

“We better get it figured out and I think we can,” Roethlisberger said.

He denied injuries played a role. And while he’s not 100%, Roethlisberger said no one who makes it this far into a season feels as good as they do in Week One. Mike Tomlin also shot down the idea Roethlisberger was playing through injuries to either his arm or knee.

Check out his entire interview with the media below.

#LIVE: Ben Roethlisberger addresses the media following our game against the Bengals.@UPMC https://t.co/JN9UT3Ab1k